Nav_roll not 0 in stabilize mode

I’m using a pixhawk running 3.2 on a new quadcopter build. As soon as I arm in stabilize mode, the nav roll goes to 14 degrees even though my RC controller inputs are all centered. I’ve calibrated the controller and I can verify the channel center point for the roll channel (channel 2) is 1508. If I move the roll stick all the way to the right, the nav roll will go to 0. Anyone have any ideas? 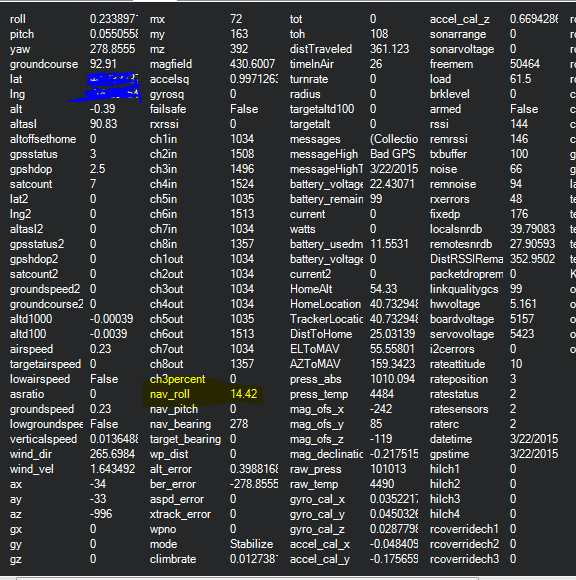 Thanks. Will do. I ran short of time to take a data capture tonight but I’ll post something tomorrow.

Here is my log. The quadcopter is sitting level on a table. I armed it and raised the throttle three times with all other controls centered. I then held the roll stick on the RC controller to the left and right. You can see how the “RC in” channels are centered yet there is a non zero desRoll.

I don’t know if this is causing the bug or not, but I’m using the RCMAP parameters to map pitch to channel 3 and roll to 2.

Please let me know if there is anything else you’d like to look at.

I had the exact same problem. I used the sum signal of the receiver to use less cables and remapped the channels with RCMAP. I always had a nav_roll of about 22° after arming the copter.

After much trail and error I used the normal ppm signals and mapped the channels with the cables leaving RCMAP alone. After that the copter flies flawlessly.

So there seems to be a bug at least in apm copter 3.2.1 when using RCMAP.

I also have seen the 22 degree error so it clearly is some sort of fixed value problem. Hopefully someone will address this.

This may be related:

I’m having the same issue.
Spectrum channel mappings with all-in-one connection to my APM2.5. Which means I need to remap the channels.
I’m seeing a nav_pitch of about 22°.

How the hell am I supposed to get my copter into the air?

I’ve seen the thread on github (github.com/diydrones/ardupilot/issues/1661) but that doesn’t seem like available very soon as it is in the milestone 3.3.

I’m successfully using the workaround alluded to in the github thread. Don’t use the radio calibration panel in mission planner. In advanced parameters, you manually enter in the channel min, max, and trim for each RC channel in the order the autopilot expects them if you weren’t using the RC map function.

If that doesn’t make sense I can write something more detailed when I have mission planner in front of me.

Thanks, daleshort. I’ll give that a try. How should I treat TRIM_THROTTLE?
My channels were rather close to each other but the TRIM_TROTTLE was way off-center. I edited it to the value of the actual roll trim but still saw some nav_roll to the right even if not that bad.

I’m also looking at downgrading to an earlier version of the firmware but was a a bit surprised how hard it is to find any specific version to say the least.