hi guys, i have plane crash yesterday
my plane hit the hill because i can’t see it with maps image from MP
when my plane doesn’t response then i have a look a location again with satelite image from maps.google.com

i’m totally suprised there is a lot of different with the image
on the MP that hill looks like a large field to me
but when i see it from google maps i can definitely see it, not a large field like i thought so, but that a high hill

i’m not blame my crash with this

but just a curious 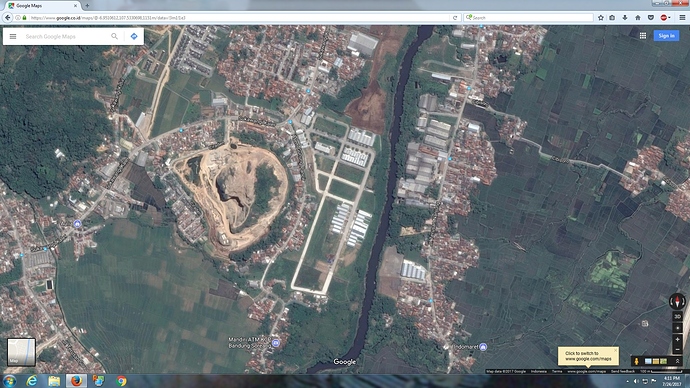 footage from the crash

It sure looks like a giant hill in Mission Planner to me. In any case, you have to be responsible for knowing where you are sending your vehicle. Cruising into the side of a hill is easily avoided with some preflight planning. You could also use the various other map types in Mission Planner to help you. There are topo maps and terrain maps that would make that big hill even more obvious.

Did you pull an elevation graph from map tools? Not like google earth and srtm is going to tell all, but it’s a good indicator. I fly daily missions in pretty mountainous areas, so that’s where I start.

oh yes i’m agree with you, this was totally my mistake
but i mean is it MP can warn us especialy for careless user like me

when we create a WP and there is a route directly to high terrain above our altitude as we set, then MP warn us “Hey That suicide…!!” so we can more detail to check in every route we made but this just an idea

wow thats new, thank’s to tell me that tools
would you tell me what you see (i’m pulling from my WP from that crash)
what it said from the graph?

Don’t forget that SRTM may not be accurate. Read up a bit on it, there’s holes and in a lot of areas it’s really a point every 100m. Better coverage is at 30m. Google Earth data is basically SRTM smoothed out, so I would trust it less.

yes you were right, on the graph telling a right high terrain altitude (which is 740m)
i’m takeoff from my homepoint at 644m with wp altitude 80m