My helicopter have same rpm with governor ON or OFF

Hi @ChrisOlson,
I have the Hall sensor connected to the motor and it works around 6250 rpm and the main rotor around 1100 rpm (measured with an optical tachometer).
The helicopter works well and keeps the rpm constant, but I don’t know if it’s a matter of a good fit or if the governor is activated, because it works exactly the same whether I use RSC_MODE 4 or RSC_MODE 3.
The helicopter ratio is 5.55 and this is my setup: 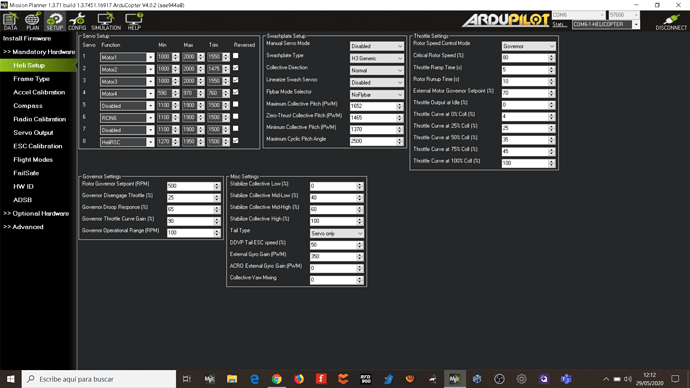 No, the governor is not operating. It can’t operate because the governed speed is set to 450 rpm and the actual speed is way over that. So it won’t engage.

7% would apply to the approximate range for the governor to operate in. So 6250 rpm I would start with a range of around 400 rpm. But the governed speed, or “setpoint” has to be set to the actual rpm of the shaft you are measuring the speed of, which in this case is 6250.

The way you have it set, you are trying to govern the engine rpm at 450. And the range is 100. So the governor will only activate if the engine is running from 350-550 rpm. The engine idles faster than that, which means the governor never does anything because as soon as you start it up it’s too far outside the range for the governor to even try.

As the speed comes up, when it reaches 5850 the governor will take over. If, during operation the engine speed at any time drops below 5850, or exceeds 6650, the governor will give up on it and revert to throttle curve.

I am a little confused about the idle. The bottom of your throttle curve is set to 4% and the next step up is 25%. There is no H_RSC_IDLE setting (it is zero). So I suspect the engine has an idle speed screw that is set for idle. And you are killing it with a CD ignition vs cutting the fuel. With the H_RSC_GOV_DISGAG set to 25, the governor will let go if the collective is lowered to 25% of it’s maximum travel. This is also not usually desirable. Most times, if you want an automatic disengage of the governor you should set the H_RSC_GOV_DISGAG to either the same as the bottom of the throttle curve (4), or maybe a couple points above that (6). This is so when you land (either manually or auto-land) and the collective is lowered all the way, the governor will let go of it and idle the engine down.

Since I don’t know exactly how your idle is set up (just guessing) use your best judgement there as to how you want to work. Killing any aircraft engine (piston or turbine) is usually accomplished by cutting the fuel, NOT the ignition. In fact, turbine engines won’t even stop by cutting the ignition because the ignition is only used to start it and the fire is self-sustaining as long as there’s fuel. Piston engines stopped by cutting the mags will catch on fire - not usually on RC aircraft but they will on big ones. So the system has been designed after the big ones you ride in to shut down the engine by cutting the fuel (closing the throttle all the way to zero bore).

Hi @ChrisOlson,
i changed H_RSC_GOV_SETPNT to 6250 and H_RSC_GOV_RANGE to 400, but the governor not work fine, see video and LOGS please:

@Loren_DS the governor never came on in that log. The engine only got to ~3,600 rpm and it’s not running good enough to attempt to fly it. The way it keeps cutting out and surging it appears to me the mixture is way too lean and it’s not producing enough power to get to normal rpm.

Also, the rpm signal comes and goes. A couple times the throttle was wide open because of the collective position. But there was no rpm signal, except for a couple instances where it momentarily read ~3,750 rpm.

Another example of how the rpm signal drops in and out when you finally got it to hover for a couple seconds.

Hi @ChrisOlson,
now I think the governor is already working properly.
Could you look at the logs and confirm it?

Thanks @ChrisOlson for your advices.