Multiple warnings and loosing elevator authority during the flight

let me introduce myself quickly.
My name is Miha Vuk, I’m from Slovenia, I’m (too) old

and I love fpv flying.
Started with multirotors using Betaflight, for the last 2 years I’m also flying helicopters and for the last 6 months also planes. I’m flying fpv in 95% of the cases. I can fly LOS barely good enough to land the model (if I can see it

).
My friend impressed me for planes with his Ardupilot long range plane.
I built the same one, he helped me with Arduplane, everything went smooth and I’m loving that plane. It’s 2.4m glider, great cruiser. But certainly not sharp turn speedster.

To the problem. I built fast ‘‘pylon racer’’ plane (durafly Efxtra) running Arduplane. 4.18 at that time.
Wired like shown on attached ‘‘diagram’’, not pretty, but it can be seen what I did.
I used exact the same components except VTX (AKK Race Range gives you diagonal lines in fpv feed no matter what you do) where I used Vivafpv VTX since it can do smart audio.
I also used Matek SAM-M8Q. So Matek H743 Slim, Frsky R9 using Fport, SAM-M8Q GPS RX, vivafpv vtx, Savöx digital servos, stock motor and stock esc. 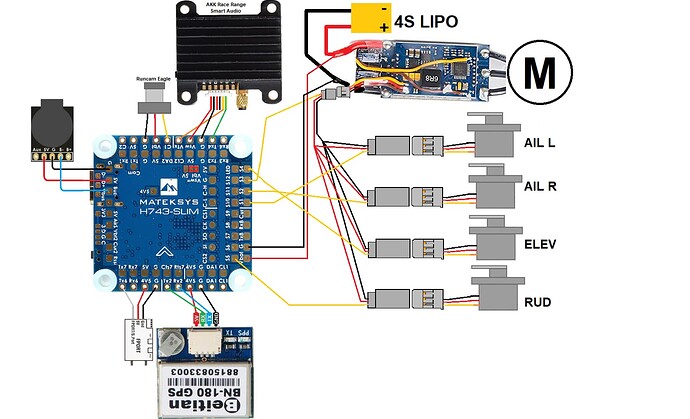 Severe vibrations / shakes appeared and I started to loose elevator authority - pulling up hard, plane goes down. Suddenly it would react and pull up and then just down. So I crashed. Hard. Unfortunately I had no sd card in my goggles so no video.
I rebuilt the plane. Really paying attention to all mechanics, linkages, servos,… My friend went through entire configuration again. He noticed that horizon is shaky when disarmed - which I believe it shouldn’t be. Flashed to 4.2 stable and horizon stopped shaking. He did calibration again, everything seemed smooth and fine.
So I maidened it again. And exactly the same thing started to happen. This time I recorded DVR and for instance I was pulling up to the maximum from 0.52 to 0.57, it was just going down then suddenly up at 0.57. Maybe adding throttle helped, I’m not sure. Pay attention what is happening with home point arrow. I had at least 12 sats all the time. I managed to land it, it is fine. We were checking the video, we were checking the log - we have no idea why this is happening. His Durafly Goblin is doing great with Matek H743 Wing. My Slim and this one are running the safe firmware.
I adjusted servo throws to be in the middle between min and max according to the manual of the plane, deflection on the elevator is closer to the minimum since this plane doesn’t need much throw, I also used some expo on Ailerons, elevator and rudder in OpenTX - all that from the beginning, before first launch and autotune.
Here is the video - I hope it works, I marked it as undefined so link should work:

Here is the link to my Google drive folder with flight log of the same flight, video and parametrization:

I hope someone can suggest me what could be the problem. I understand that chances to find the cause is small, so I’ll be happy for any suggestion which might have sense to try it. I just won’t launch it again without any change and hoping, well, maybe this time it will be fine. Because I’m 99% it won’t be.

Thank you all very much in advance for any suggestion / opinion / idea.