Multiple CAN devices on one Pixhawk4 can port

i would like to put multiple CAN sensors (mateksys) and AP_periph modules on one CAN port of the pixhawk4.

I have read somewhere:
overall bus length is much shorter than a wave can travel in one bit period (maximum bus length for 1 Mbps CAN is 40 meters);

As for power, you may not need if it is a low power device, otherwise you use UBEC and keep all the ground connected with FC

Looking at the Mateksys L431 Node, I dont see termination resistors, so you should be able to Daisy-Chain and put a JST=GH soldered resistor at end of line

Hi,
unfortunately the Mateksys L431 can node does have the 120 Ohms resistor.
combined with the other sensors i will have 5 times 120ohms in parallel on CAN1 and 3times 120Ohms on Can2.

Shematics of pixhawk 4 would be great to esily find the correct resistor in case we have to unsolder it.

Yeah, you are right, here is a quick fix for this:

Remove the 120 ohm resistor and replace with JST-GH termination resistor. 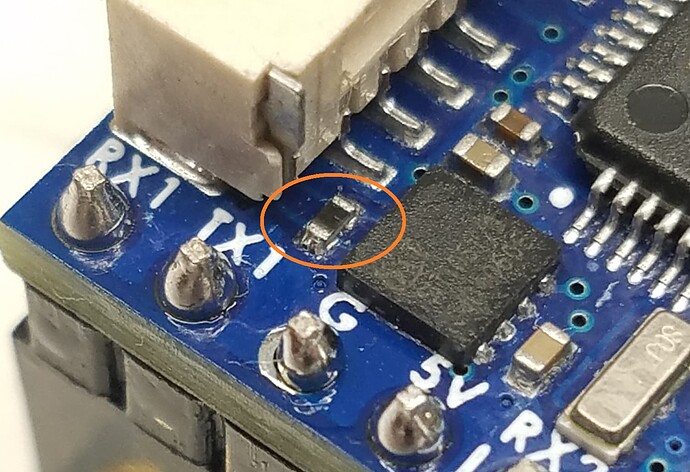 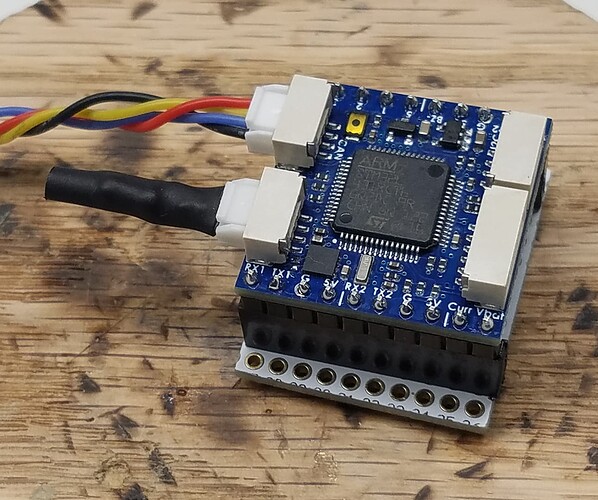 @tridge could you ask Matek to install a solder bridge so we can disable onboard termination resistor please ?

@Sampson is a solder bridge for selecting the termination resistor possible in a future version?

Or might I suggest an electronic terminator that can be turned on/off via a parameter? Extra cost added i think would be worth it to many commercial users.

And easier to scale for those needing 5+ on a vehicle.

If the 120ohm is not required on this CAN node, we can remove it in next batch of production. but I think removing it is much easier than finding a 120ohm to solder it back for some users

Bridging the Resistor would be 0Ohms, shorting CAN H and L.

A thin pcb trace serial to the resistor between H&L that could be cut with a knife would be a possibility.
I would not remove the resistor entirely. Too difficult to solder it on if needed. (Probably more often than not)

Since i have the equipment, i will just unsolder it for now and use the airspeed and GPS as endpoints. (keeping their resistors active)
→ Results in 3 instead of 2 120Ohms resistors.

to ensure reliability:
I will try it with all 5 resistors first, if that works it will be even bettwer with only 3.
Maybe i have a look at the Pixhawk 4 as well to make it exactly to the CAN Specs.

P.S.: Nice to have Mateksys so active in this group! Thanks for the nice products!

I just tried the can nodes. (no servos on output, just Oscilloscope till now)
After figuring out the different output numbering schemes in AP_Periph it looks quite promising.

One thing i would have loved is to select the Servox_funktion that will be transfered to the can bus, not only the already assigned servo outputs. Would make it much more flexible on complex aircraft.

Tested:
A)
I tried 3 L431 CAN Nodes and one F405 CAN-GPS in series, attached to a pixhawk4. All with 120Ohms resistors.
Seems to work fine. Oscilloscope showed clean flanks on the Can H-L lines, but every 120Ohms resistor reduces the amplitude quite a lot.
With only 1 device it is ~2.3Vpp. With all the devices ~1.3Vpp.
Interestingly the Matek Can-GPS seems to input amplitudes almost double the amount.

→ Good for testing, but i will definitly unmount the cannode resistors and perhaps the pixhawk ones as well for flying. (resulting in 2 resistors at each end of the can bus.

Only problem: i was not able to update the airspeed sensor via slcan to the new firmware with correct name. Perhaps i have to do it over TTL.

Only problem: i was not able to update the airspeed sensor via slcan to the new firmware with correct name. Perhaps i have to do it over TTL.

The best would be if no CAN node has 120 ohm terminator permanently soldered. Simply include a JST-GH connector with 120 Ohm terminator that you can plug into end nodes.