After auto tune when taking off in Stabilize the motors rev up quickly with vary little input and continuing on it seems to take off with only 3 motors and then correct itself and fly normal.
Only does this on first take off and follow on take offs it does not do this.
From the graph of the motor outputs it seems they are a little over active than before with a little oscillation in the motor outputs.
Copter seems to fly well though.

When you arm motors, the four become spinning?

Yes, they all spin just 3 spin much faster than the others.

So the logs show what you’re saying quite clearly. So at the beginning 3 of 4 motors spin up, one stays low. Also during the flight the motors are oscillating constantly so I think the issue is just that the gains are too high. 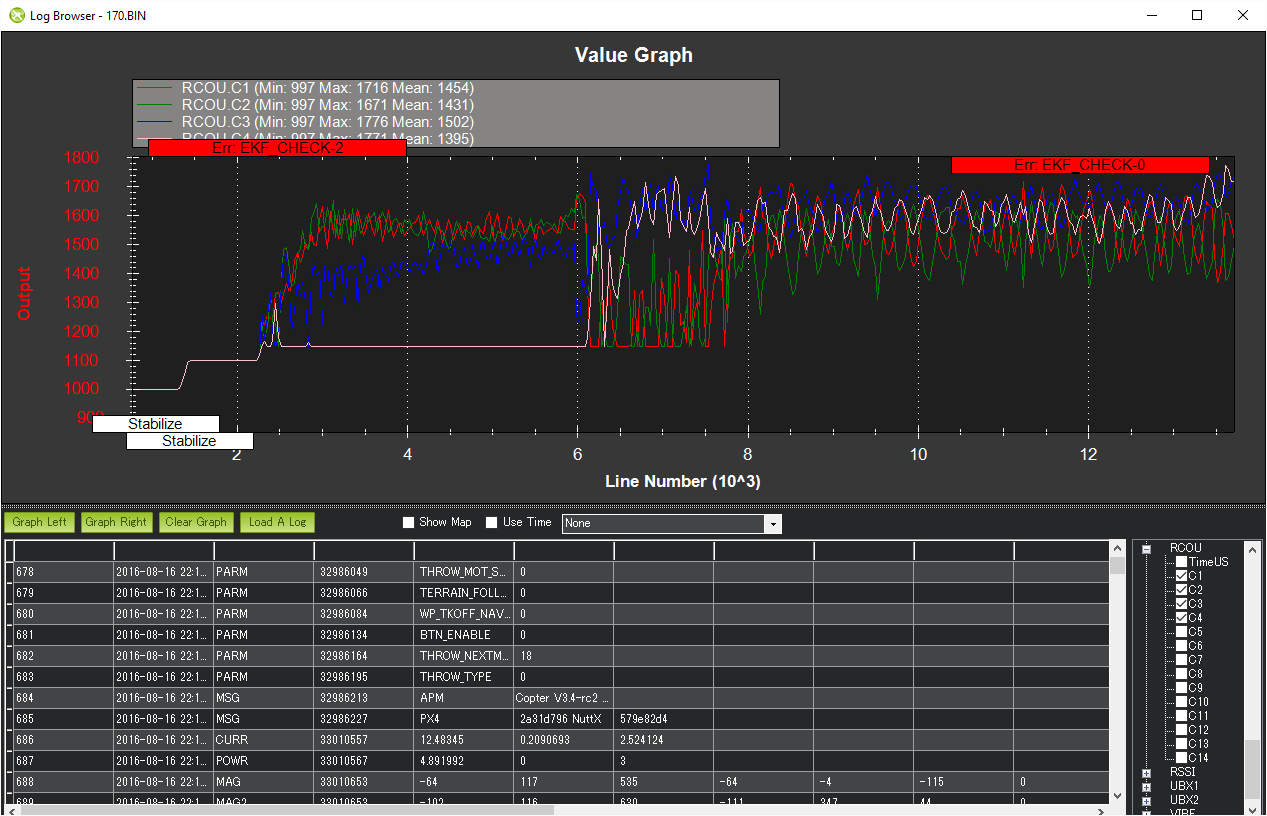 Another option is to reduce the AUTOTUNE_AGGR parameter from 0.1 to 0.075 and run the autotune again. I’d try the first option first though 'cuz it’ll be quicker.

It does take off and fly fine but for a Stabilize flight it is a little unnerving.

My plan is to move this flight controller to a 250 size quad and retune. I will probably set them back to the default since I know what they were and it flew kind of sluggish so it will be less of a nail bitter.

This is a little larger than an IRIS copter and I can post the auto tune log if someone what’s to take a look at it.

I input the new values for the PIDs and got the same results. First take off is over reactive and sloppy but flies just fine. Motor outputs look to oscillate as before. The second and third take off where smooth and just right. I think the EKF is taking too long to settle down before the first take off.

I also think this is an issue with the Pixracer and I need to try this on the Pixhawk and see if I get the same results.

Here is the log of the flight with the two follow on take offs that worked just fine.

I performed an Auto tune with my Pixhawk flight controller on a similar size copter with slower motors and the same thing happens. So it’s not just the Pixracer that flies like this.
I did notice that the slower motors makes the issue less noticeable but still happens.
I think if this was an over power 250 quad that the copter would just flip over on its back if the motors were started. Have not tried this yet…

Auto tune seems to work well and completed quicker than on the Pixracer maybe because it was closer to being tuned already. I don’t think auto tune is the issue here.

Here is the auto tune log and you can see at the take off each flight before and after the auto tune that 3 motors spin up faster than the 4th motor on take off. Copter flies just fine and is very responsive.

Just did a test takeoff in different modes to see if I can determine what’s going on here. Takeoff in Stabilize and the copter wants to lean over. Takeoff in Position Hold or Altitude Hold work just fine.

Hi Mike,
Thanks for the continued testing. I don’t see anything hugely wrong in the logs except for the slightly unbalanced motor output during takeoff.
You’ve done an ESC calibration of course?
http://ardupilot.org/copter/docs/esc-calibration.html
Maybe you could also try testing whether the motors spin up together using the mission planner’s motor test screen? This will allow you to put in a number like 7% or 10% and make sure that all motors start up and spin at roughly the same rate and have similar deadzones.
http://ardupilot.org/copter/docs/connect-escs-and-motors.html#checking-the-motor-numbering-with-the-mission-planner-motor-test

Also the ATC_RAT_YAW_P and I are still quite high at 1.5 and 0.15 respectively (I know I gave you these numbers before) so I think maybe reducing them again to 0.5 and 0.05 to see if it helps.

By the way, have you ever tried Copter-3.3.3 on these vehicles? If “yes” I guess they didn’t have the same issue?

One more small thing that is probably not related is that there is a fair bit of noise on the primary compass (which should be the external one if you’re using that). I’m not sure where the noise is coming so can’t say whether it’s some wiring issue or something else on the copter is interfering. 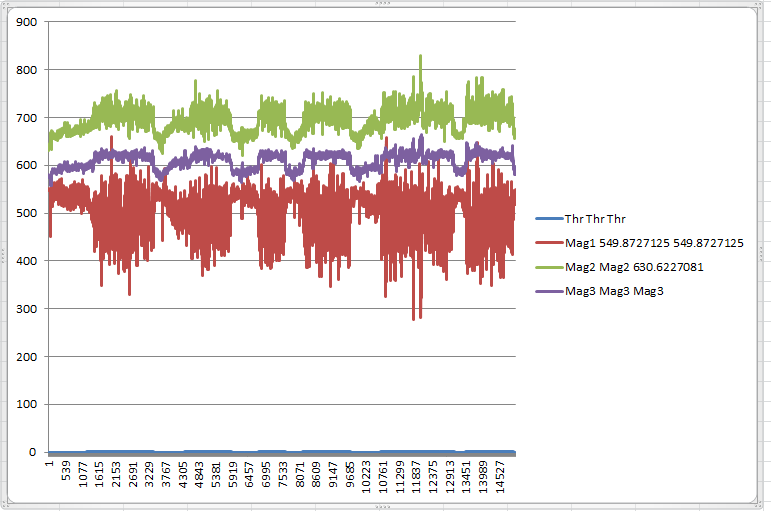