Why under the mission start box when planning a mission are Flight Speed and the camera settings missing? 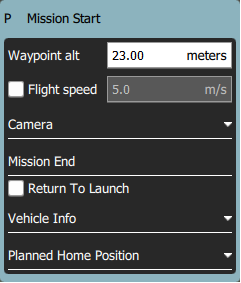 What’s in the user guide 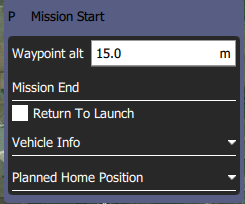 What’s in my QGroundControl

The mavlink commands for these which QGC supports are not supported by ArduPilot.

Does the flight speed correspond to a DO_CHANGE_SPEED? ArduPilot
definitely supports that mission item. MAV_CMD_NAV_WAYPOINT doesn’t have
fields for waypoint speed, so I’m a bit confused by the interface.

Which camera messages would be need to add support for to get the
additional options?

The Camera Section uses the follow commands (the ones I think are missing from ArduPilot are bolded):
MAV_CMD_DO_MOUNT_CONTROL, MAV_CMD_IMAGE_START_CAPTURE, MAV_CMD_DO_SET_CAM_TRIGG_DIST, MAV_CMD_VIDEO_START_CAPTURE

Flight Speed uses: MAV_CMD_DO_CHANGE_SPEED.
I think there was something wrong with respect to the supported params for that one. Maybe the airspeed/groundspeed things. Don’t remember:

I’m sure people more knowledgeable than me can argue on the image-start and video-start ones. The video one looks benign, at least, and could be tested on something like a SkyViper. The image one… well… I’m not sure of the utility of shooting in seconds.

(unless you’re doing it really right). Plane is the only vehicle that flies airspeed AFAIK (possible exception being some of the boats) - perhaps checking to see if it’s a plane would be better there.

I don’t immediately see an incompatibility, however. I do recall there being a discussion in the distant past.

Yeah I noticed that bug as well when I pasted this. I’ll fix it.

The image one… well… I’m not sure of the utility of shooting in seconds.

I believe the long exposures are used for night photography.

Also in poking through the ArduPilot DO_CHANGE_SPEED code I’m not quite seeing the problem as to why I disabled it. One things I saw though was that on various vehicles a number of of the parameters of that message are ignored which could lead to incorrect behavior. Seems like they should NACK if the message values are not appropriate/supported for their vehicle. Currently it looks like in some cases they will still affect speed but likely not the way the user wanted.