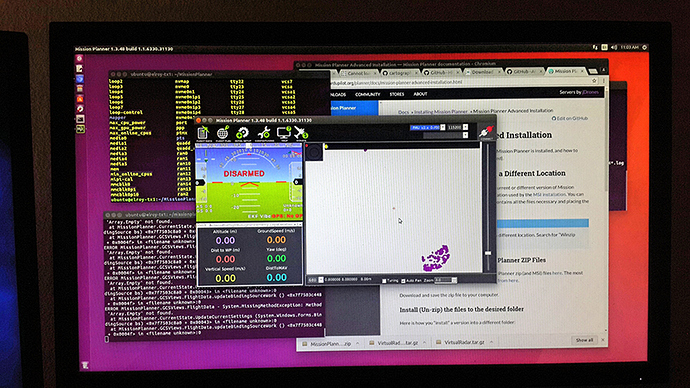 So far people have run it on Arch and Ubuntu. On Arch you need to be in UUCP group on Ubuntu you need to be in dialout group. Sudo to start it so you can download firmware on ubuntu not needed on arch. I’ll figure out the sudo thing on ubuntu a udev rule will fix that. The instructions are at this link Running Mission Planner on Linux.

It’s been time that it’s running on linux but it works flawlessly especially if you use 3d desktop. There is several bugs and functionnalities doesn’t working.
It’s a workaround not a reliable solution.

It’s kind of working ok when it comes to the most basic functionality, but 70% of the extra features will crash or otherwise med up the rest, providing true Microsoft experience.
Mission planner depends on the unholy mess called .NET and despite huge progress on Linux, will most likely never be good, just see other projects where Microsoft lied as if they ever cared to support non-windows, like Skype or the luckily dead Silverlight.

Your real options are true multiplatform applications, like Qgroundcontrol or APMPlanner2 … or MAVProxy

Have you tried it with mono 5.0.1.1? Haven’t run into any issues yet. Couple of other guys using it same story so far. Cant configure my rfd900x radios on qgroundcontrol. I use that on my mac. But I want this to run on the robot and access via wifi and vnc. Then any box that has a vnc client available can talk to it. I primarily use ROS rqt rviz rosconsole and dynamic reconfigure. Rosconsole is my mission planner but to keep from having to write a bunch of code to change parameters and such I’m doing it this way. If it has a problem no big deal. I want to use my RFD900x for other things. And I need all the bandwidth so no mavlink running over it. No plans to use waypoints or any other feature since the bot is designed to be fully autonomous. Saved me a lot of time I can put towards getting the vision system working which is my goal. I have no love for microsloth but you have to work with what you have or write something. Totally different application for MP than using it for a ground station.

+1, it doesn’t not work well and you have to change upper lower case to make it recognized in mission planner. Apm planner is better for analysing logs