Mission Planner Flight Modes not displaying in configurations or HUD

During setup, when attempting to set the flight modes in “Setup > Mandatory Hardware > Flight Modes” or “Config > Flight Modes”, the drop down menus only have the option “INITIALISING”. 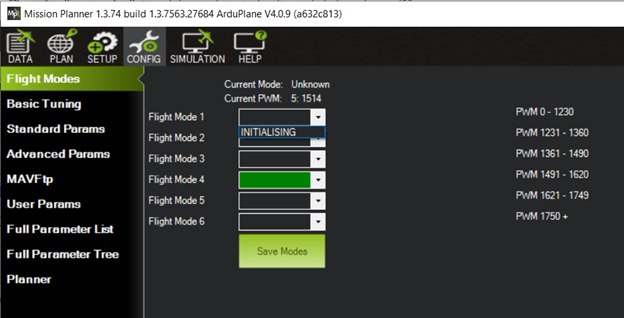 I also tried setting the flight modes directly in the “Full Parameter List” and then writing the new parameters. The parameters saved and show up when I cycle power. However, when I go to the HUD, the flight mode is listed as “UNKNOWN”. 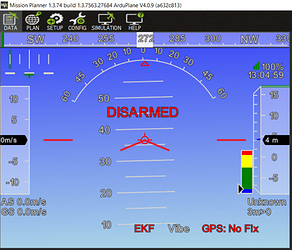 HUD_UnknownFlightMode624×534 121 KB
I can use my transmitter to toggle the highlighted flight mode under the setup tab, but I have no idea which flight mode it’s registering.

I have tried “param gen” as suggested on other posts. I also tried uninstalling and reinstalling MP. Neither of these solutions fixed the problem.

Has anyone had this same issue? Does anyone have any suggestions? I don’t want to test fly without knowing the flight mode.

Update: I updated to the most recent BETA version (1.3.74.1) and the issue was resolved.

Another Update: I thought everything was working and now I am experiencing the same issue again. Things I’ve done since it was working:

When I reconnected after calibrating the ESCs, the flight mode on the HUD displayed as “Unknown”. I checked the configuration tab and again only “INITIALISING” is listed under the flight mode drop downs. I tried “param gen” and that didn’t work. Any thoughts?

Having the same issue. I deleted the mission planner folder from the my documents folder and reinstalled MP. This fixed it for a few days but the issue is back.

Update: I set the flight modes directly using the full parameter list. I have been able to successfully fly in the set modes (Manual, FBWA, RTL), but the mode still displays as “Unknown” on the HUD. This leads me to believe it’s a bug in Mission Planner because the flight controller knows which mode I am setting with my transmitter.

Same here. The modes return if I delete the mission planner folder from the my documents folder. You have to reset the presets and joysticks files(if you use one).

Not sure how long this fix lasts.