I just downloaded the latest version of Mission Planner (1.3.5.1) and I would like to run a Python script to control my multicopter (3DR X8). However, under the Actions tab in Flight Data, there are only 3 buttons I can press: Auto, Manual, and RTL. 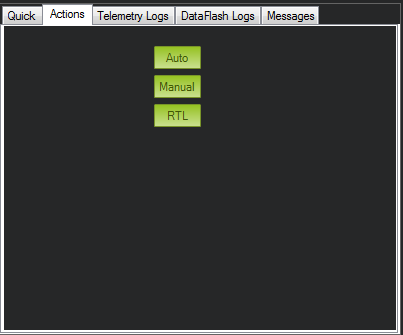 Looking at other tutorials and pictures online, there should be more buttons (such as script) under that tab. Does anyone know why this happened? My friend also downloaded Mission Planner, and he has the same issue.

Under the Config/Tuning tab > Planner, there’s a checkbox for ‘Advanced View’ if you check that the buttons will reappear.

Wow, that was something I definitely overlooked. Thought it was an update issue. Thanks so much!

Three hours of Googling and searching these forums never found this. It got suggested when I caved and started to write my own post. Thank freakin’ God. Now I can try to learn Python.

Hey,
I am having the same problem but I am not seeing “Advance View” The is a drop down with basic and advance in it listed next to Layout. Its all ready set to advance though.