Once [Moving base] is started and update the little “home” icon on the flight data screen:

RTL will return to launch. MP never updates home, this was by design. however you can update rally point 0 with will make it return to your moving base location. assuming you have rally points setup.

Thank you for answering,

I did try to click on the “update rally point 0” tick box ,this was ok.

When placing a rally point on the flight plan screen, ok.

Uploading rally point to the aircraft: got 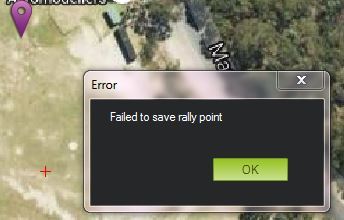 rally points are not available on copter. I assume that’s what you re using. the next copter release should include rally points however.

Thank you for answering.

Recently a client asked if it was possible to have a moving base so the plane could return to that point as they are launching the plane from a moving vessel. I was given the project and reading all the MP documentation I got my rally point 0 working and updating its position. The only issue I have is that when switching to RTL the GPS unit for the moving base is showing its Absolute Altitude and we are always working on Relative Altitude, when switching to RTL the plane moves to the rally point but increases its altitude due to the discrepancy of the altitudes. I tried the commands ATL_HOLD_RTL and RTL_ALT but they don’t override the rally point 0 altitude given by the GPS unit. It’s there any other way I can fix this so RTL maintains its current altitude when moving to rally point 0?

Have you tried in “Flight PLan” to set the RP alt to zero?

I have tried many different options, and I also thought it was a problem with my GPS unit. Because of that I ended buying a different brand with the same results.
I haven’t been able to get this to work.

Any luck with solving this issue?

by default the rally point 0 alt is set as

Michael,
then if default Alt = 0 in flight plabber screen (instead of 100), would the copter land without problems?

yes, that will set it at base location alt + 0

After changing the Rally Point 0 Alt= 0, today I have done one test but with the same result >>The copter when approaching the RP tends to go up instead of going down. The RP and HOME are at the same relative alt (294m),

do you have the tlog? could be some other param causing it

OK, within 5 hours I’ll be home and post it

Here the Moving Base Logs

I have tested with 3.3.3. Imagine that this will not be the problem because this version already contemplated the base of mobing

Any luck with this issue so far? is there anything I can do to help solve this?