Good morning /pm to all developeders, i need info for set up on mp and a stable wiring for make work the mb 1242 and 1202 on pixhawk and pixfalcon, Hope in a positive answer by all the developers

did you read this? everything is there. http://ardupilot.org/copter/docs/common-rangefinder-maxbotixi2c.html

If you change orientation, the signal will be displayed in thr RADAR screen
You neeb to CTRL-F to activate proximity in Mission Planner
http://ardupilot.org/dev/docs/code-overview-object-avoidance.html 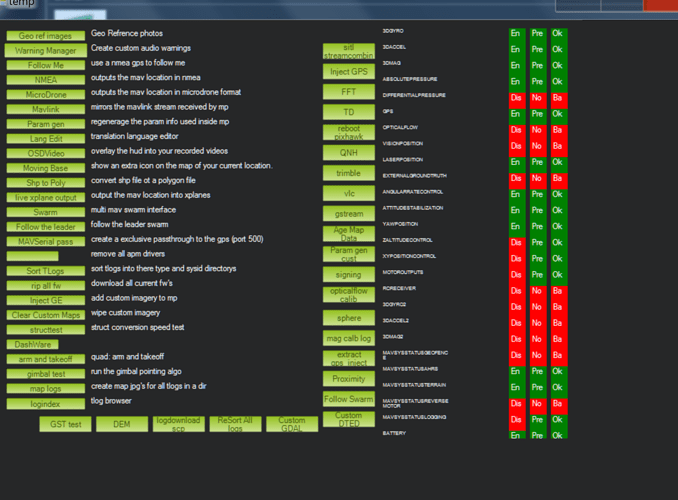 The maxbotix ( That seems to work fine) has to be set to look forward in the parameters
http://ardupilot.org/copter/docs/parameters.html#rngfnd-orient-rangefinder-orientation

sorry what i’ve written before is about tf mini lidar on arduino,
the sonar is 2.55 stable…even im moving a little beat still the same

also for maxbotix i need to wire it on arduino???

Hi, its normal that the measure of the sensor is still the same?
I’ve done the arduino with tf mini lidar configured with your ino library

David have you resolved the issue.

Note at the moment ArduPilot only supports one Maxbotix I2C sonar as they all use the same hardware address and we only have that single address hardcoded at the moment.

@Dave84 Sorry I did not see you last request. I suggest you put my name when you reply (do a @ and you will see names). If you have questions about the TFMINI and Arduino I2C please ask here: How to make the TFMINI rangefinder talk I2C

Hi, im testing now lidar lite v3… for now i wire and set it on i2c port but i need to test it also on pwm,
i can see that on i2c work… but i don’t now if on pwm will work better

I never tried, just used it on i2c

I explained this a few weeks ago

If you change orientation, the signal will be displayed in thr RADAR screen

You neeb to CTRL-F to activate proximity in Mission Planner

already done… but its not working

This is working for copter , not plane
If copter , what is the Flight Controler and Arducopter release ?

flight controller is pixfalcon and the version of the firmware is 3.5.5