Hello,
I got a problem with the Matek F405 Wing.
If only one Lipo battery is connected, no telemetry is transmitted.
I start the FC by connecting USB (notebook mission planner) and then connect the battery to the telemetry connection. (also without USB)
I already tried different UARTS and another receiver.
the same receiver with the same level converter works right away on an old Pixhawk.
Except for the “starting difficulties” the FC works flawlessly.
RC: Xlite with R9MM+ with Flex firmware

Andruplane stable-3.9.8
I use the UART Option 10 and the Yapuu telemetry cable. 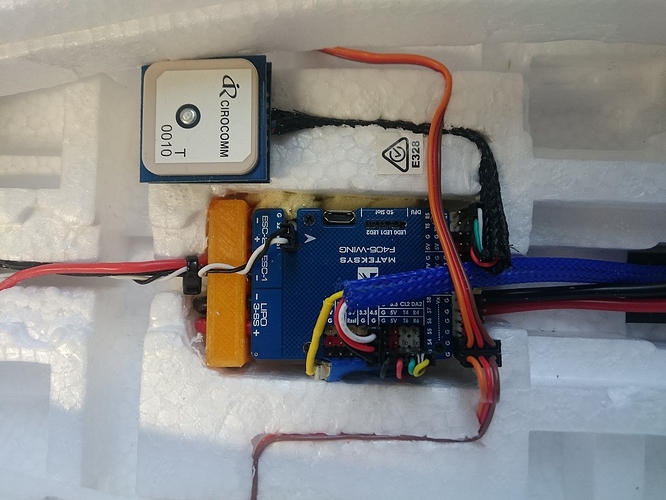 From your description, I am not sure exactly how everything is connected…but a couple of notes…

Powering up via the main battery first, then attaching USB will allow everything to work…ie Compass and FRSKY Sport inverter cable…

Thanks for your answer.
But that’s only half true.
UART2 (RX) already gets power when only USB is connected. (The transmitter already has a link)
UART6 (telemetry) seems to have nothing yet
UART3 (GPS has no power)
Compass and other I2C devices I had not yet connected to the FC. I can’t say anything about that yet.
I don’t know if there is a MAX 232 in the cable, but I suspect it is.

No, it’s the other way around. I have to connect USB first and then the battery, then I can remove USB again.
Should I install a 6V capacitor on the inverter cable?

the power in the SBUS row is not 5V… its 4.5V , the one below RX2 is 3.3V,and both are derived from either USB or 5V regulator, neither is the 5V derived from VBAT and labelled elsewhere on the board…

you mention “only one LIPO”…how many are used and how are they connected? if you give a complete connection description/diagram, we may be able to help more…

if the FC and inverter cable are powered, everything cabled correctly, and FC params correct, the only way you are not getting telem to the RX is if the inverter cable is latched up…

and if you have the FC running before you attach the LIPO (USB or otherwise), the compass, when attached, will not function depending on chip and circuit layout used… 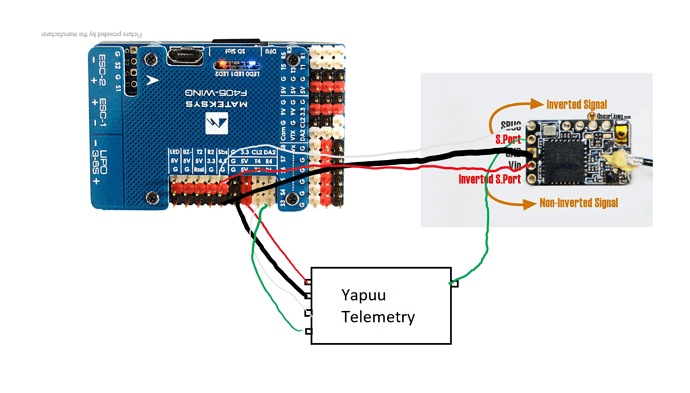 as I said, if the battery is connected first, telemetry does not work.

Startup aid via USB, and everything runs correctly.

Pls explain the yappu box. Afaik, yappu telemetry is a script, not hardware.

The box is a “Yappu Telemetry Cable” for Pixhawk.

Don_Sebastian, I don’t think you need the telemetry cable. Check the Matek website diagrams. The diagram shows S.Port going to TX2. UART2 has a built in inverter.

I had ordered these cables:


For the price it cannot be built by yourself.

I’ve tried it this way now. the wiring is now the same as INAV setup.

Unfortunately, it doesn’t work at all.

can you please take a picture of your setup and send an excerpt from your config? 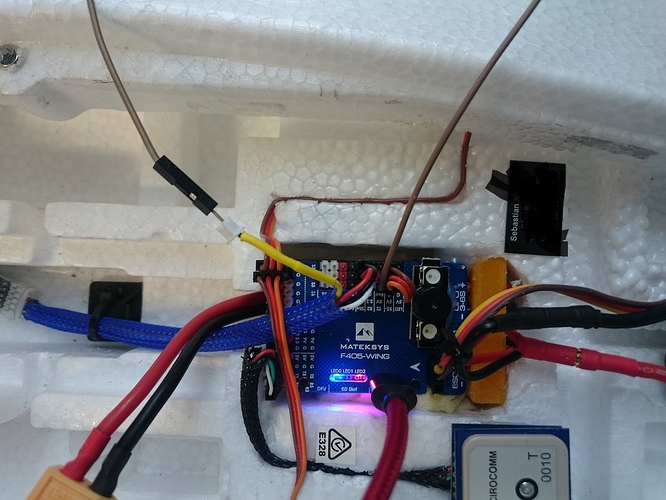 AFAIK, on UART2, you usually connect the receiver (4,5 = VCC, G = Ground, Sbs = SBus). I have never tried connecting my S.Port cable to UART2 and somehow doubt that it would work.

For the setup in ArduPlane, all that needs to be done is to set SERIAL5_PROTOCOL to 10. Baud rate is set automatically to 57k. The Yaapu script will then display telemetry shortly after the system is powered up and the receiver binds to the Taranis. You can also set SERIAL5_PROTOCOL to 4 and do a manual sensor search in the model’s telemetry screen, but in that case the Yaapu script won’t work and you will have to set up your own telemetry screen or script.

Most likely any of the other free UARTS would work just the same.

So yes, for the price it can be built by yourself, like a 100 times.

If you indeed have telemetry running on the Taranis via Yaapu script after you power up with USB and then connect the LiPo, then please have a look here:

I’m having a very strange issue… If I use just a battery, I can’t get servo outputs. If I plug in a USB first, then a battery, everything works fine. I took a multimeter and all the voltage rails are showing the proper voltages. If I hook up a battery and then the USB it doesn’t work either. It has to be USB first, then battery. I can’t get any sort of logs out of the FC, is it dead? I’ve tried reflashing firmware multiple times with full chip erase with the same issue. Any clues? I took a vid…

Thanks, the tip with the bootloader. it was the solution.

I have understood your detailed instructions but will leave the hike in anyway, because I would have to solder the plug on the receiver to go to the non inverted pin.
the 2g weights do not interfere.