Attached is an oscilloscope image showing my problem with FrSky passthru telemetry. The first part of the signal comes from an univerted s.port pad on the receiver, while the second part of the signal is the return transmission on the Serial1 TX pin of the FC. It’s clear that the transmission back to the receiver has about half the voltage of the original signal generated by the receiver. SERIAL1_OPTION=4 in this case for half duplex transmission. I have also tried a MAX232 converter using the inverted s.port signal with similar results, i.e. the transmitted signal from the flight controller is too low to trigger a response on the other side of the converter.

I don’t know if it’s even possible to fix this. Possibly with a conversion cable made from two mosfet’s, a diode, and a capacitor acting as a charge pump. I have ordered some parts to try that.

Any other ideas? I am not an electronics expert by any means, so if I need to make any more measurments please let me know. 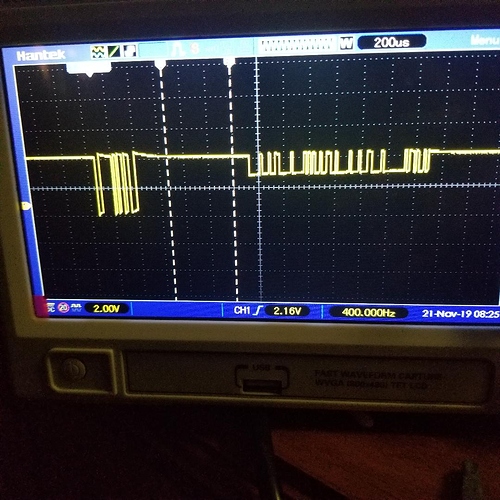 some idiot (me) forgot the image

I think I misinterpreted the oscope image. I beleive TTL level signals are normally high, and a 1 bit goes low. So the voltage is not dropping low enough in this case. Can a higher pull-down value be speciified for an output pin? Would that help at all. I read somewhere that the R-XSR receiver requires a higher threshold voltage than say an XSR receiver, but I don’t think that is the problem now.