Hi! I’m running Rover 4.1 on a Matek F405-Wing for a ground rover project. I’m having an issue where the servo PWM outputs seem to randomly start outputting a faulty signal until I completely reset the servo channel configuration, at which point the output is fixed.

The series of events that happens to me:

I’ve tried this on several F405-Wing flight controllers, tried downgrading Rover versions, isolating it to a testbed setup with only the flight controller, battery, and servos, and it still occurs.

I’m posting this here instead of an issue on the Git repository because I don’t think I have enough information to identify it as a bug. I’ve seen other similar issues like https://github.com/ArduPilot/ardupilot/pull/13814 - " Faulty PWM output after few flight controller restarts due to wrong IEP Timer configuration".

Does anyone have any experience with this, or recommendations for where to look/information to collect to narrow the issue down? 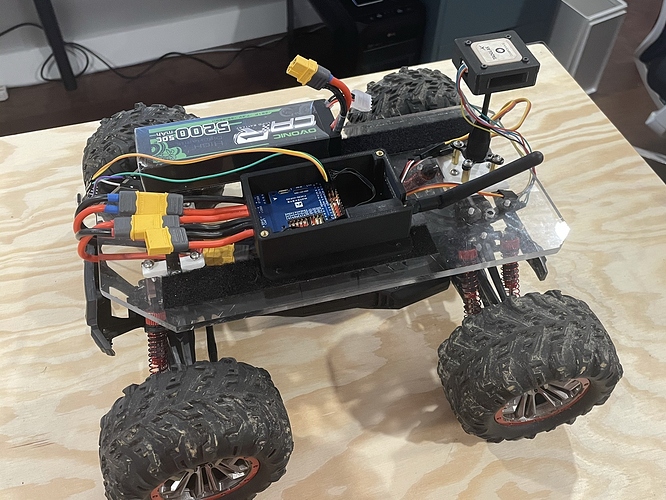 Some logs from where its OK and some where it has gone wrong would be good.

Bonus points for a scope / logic analyser trace of what is going on.

Thanks for the tips – I’ll get a scope on the servo outputs and post those results as soon as I can. I was able to reproduce it while logging, it seems like I can trigger it by unplugging the servo cable while being driven.

The charts/logs below show two tests. I have steering on channel 3 and throttle on channel 4. During the first test, the steering servo works properly. On the second test, after messing around with the cables and unplugging/replugging everything several times, the steering PWM signal on C3 is not working properly. Depending on which servo I use, the servo either interprets the bad PWM signal as nothing, maintaining its position, or interprets it as a value past the end stop, and runs to the end and breaks.

The chart still shows the same output values. I’ll have to get a scope on it to see what the signal actually looks like. 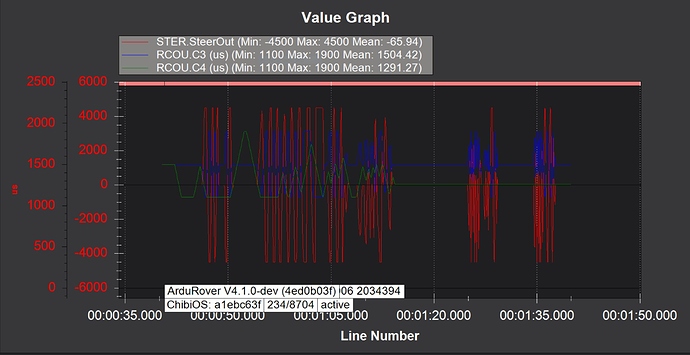 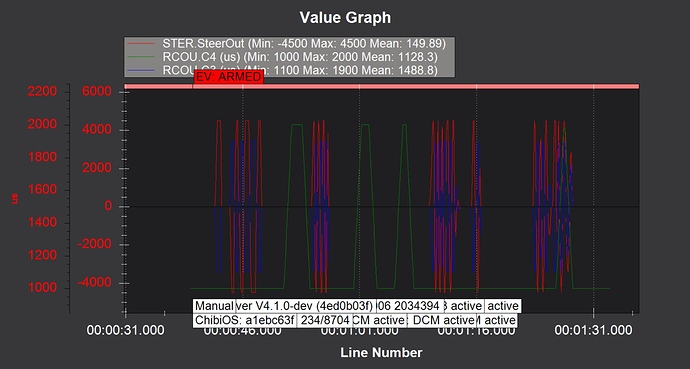 I think the issue is related to MOT_PWM_TYPE = 4. You will also notice that SERVO4 MIN, MAX and TRIM have changed in the second log.

Probably a output groups issue. Outputs 3 and 4 are in the same group. If you move the sterring to another output I suspect the issue will go away.

Look for the RCOut: message on boot.

Just looked at the servo signals on the scope and it looks like at some point the output is being changed from a 50Hz servo output to some other protocol (Maybe DSHOT?) that I don’t recognize with a much higher frequency.

A few other things I notice:

After encountering the issue, the throttle output is outside of the min/max range configuration. Min/max values are still set to 1100-1900, but it changes to allow 1000-2000. 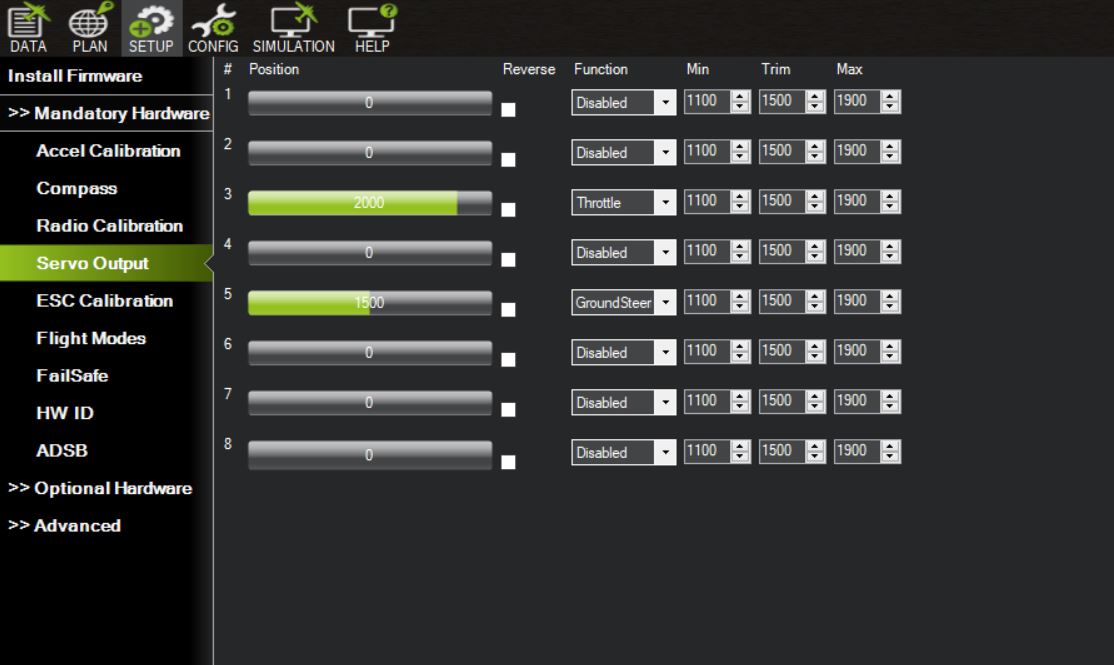 I don’t entirely understand what’s going on but it seems like at some point the configuration for the “bad” channel is being changed/reset.

I think I’ve reproduced it in the simplest possible situation:

So there seems to be some kind of configuration that is not being saved on power cycling that determines what type of PWM signal gets output.

The other signal is Brushed signal, its just proper PWM with a 0 to 100% duty cycle rather than the not quite PWM we use for servos.

It seems to be working as expected, you have MOT_PWM_TYPE = 4 asking it to do that. The intermittentness I think is just that it takes a reboot to change the PWM type, so if you move the throttle output the PWM type change does not catch up until you reboot.

Oh! I see what you’re saying – so MOT_PWM_TYPE = 4 is outputting a normal PWM signal rather than the 20ms servo signal with a 1-2ms width. I see that now, on https://ardupilot.org/rover/docs/common-brushed-motors.html,

I misread this as Brushed BiPolar being a normal servo signal, but it interprets 1500us as stopped.

For a brushed ESC that maps a servo signal 0% to full reverse, 50% to stopped, and 100% to full forwards, are there any settings I need to configure to tell the autopilot to map the throttle properly? After testing it seems like this is the default and I just have to setup the transmitter to send a throttle signal that centers for manual mode.

Thanks again for the support and explanation @iampete, everything works great now! I was definitely overthinking the whole thing and will read the docs more carefully next time