Mapping a lake with ArduPilot

Transducer mounted in the mid section. The boat is designed to fit the transducer there by Carplounge.
You need to drill two holes horisontally for the bolt to mount the transducer so that it will pivot into the fitted position (see pict).
Then the third hole to thread the cable inside the hull. Cable is on the top of the transducer body. Measure closely before you drill, and size that hole so the cable passes through snugly.
Make sure to smear the bit of the cable entering the whole in Tec7. Then pivot transducer to push the last centimeters of cable in and tighten the bolt.
Finally cover the cable entry and the hole thoroughly inside the hull. And let everything dry up (do not touch anything) for 24 hours. 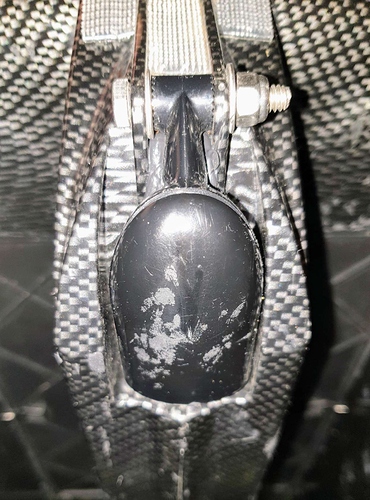 To do this you obviously have to cut the boat open and seal it afterwards. I assume you know how to do this.
If cutting the boat open is not to your liking… : The three dual lock velcro strips above the transducer is for my 3D printed Deeper Pro+ transom holder. I have some strips of velcro on top of the battery cover as well. I put a spare phone there. The Deeper app simply runs on that spare phone together with TeamViewer -“host” app on the boat. Then on shore I remote control it all with TeamViewer on my main phone/tablet/PC. This self made end result is pretty much equal to a full blown €1000+ fish finder & GPS package from Carplounge (the data for producing depth maps you simply export from Deeper’s Lakebook)

Good to know thanks !
And thank you for others tips as well. Not for using in caplounge in my case
What about Lowrance HST WSBL vs bluerobotics one ? 200Hz vs 115Hz (Both proprietary system, same range of price)

Don’t know much about that alternative - so I can’t help there. And do use Tec7, not silicone. Carplounge has delivered thousands of boats and presumably know what they are talking about when they advice against silicone (I asked since I bought their kit and pieces and built it all myself)…

Is there such a discussion forum, I am unable to find ?
I would be interested in using the new ping sonar and georeference the raw measurements https://bluerobotics.com/store/sensors-sonars-cameras/sonar/ping-sonar-r2-rp/

@vbnhu, I think the Rover or Boat forums are a good place to discuss. We have a driver for the BlueRobotics ping sensor but it’s not included in Rover-3.5. It is available using the untested “latest” and we will start beta testing Rover quite soon. Less than 3 weeks I think.

They were tag as beta few weeks ago so are they really reliable ?

@kikislater, I don’t fully understand but we haven’t started beta testing Rover-3.6 yet… 3.5.1’s beta was quite a while ago…

No sorry I talk about ping sonar. They say on bluerobotics that it was a beta or alpha sensor … So how could it be reliable.

It may be reliable. I’m kinda waiting. Currently using a $250 Lowrance Elite 4 with good success.

Already tried others sensors which were not in alpha or beta stage was not a success, that’s why I’m worry about …

@kikislater Blue Robotics has the Ping sonar listed as a beta product because although “the units are well-tested and we are confident in the hardware design, but we intend to improve the software, firmware, and features in the near future.”

We intend to have another firmware release in the future as well as improving the viewer and other features. The software is still very much in development, so if you want it to work with boat out of the box, I recommend waiting until it can be proven by the community. Still lots of testing and experimentation to do.

@rmackay9 Was gracious enough to work on a driver for Ping for ArduRover while our software team has been working on other things.

so if you want it to work with boat out of the box, I recommend waiting until it can be proven by the community. Still lots of testing and experimentation to do.

@Kevin_K Ok ! Don’t care about software, we just need data collection to use in GIS. And using ardupilot log is not a solution as logs are affected by EKF to smooth path which not rely the reality of positionning. Software is useless for us.

Do you think that this platform can work as airboat with differential thrust of two external motors and props?
I am looking to build a mapping boat to map the floor of salt pools so no underwater thruster would survive there

I was hoping the 3.6 beta should be out by now, I guess @rmackay9 got lot of things going on so we have to be patient. I just visited a customer yesterday who was very interested about mapping a lake and I do not want to purchase another sensor and modify my platform…

@kikislater I think having timestamped data from RTK sensors alongside with the corresponding depth measurement and platform orientation should be your objective as well. If you do not like the EKF output you can use raw IMU data and do sensor fusion by your preferred method, but consistent time stamping and synchronisation is a key in my mind.

ILAP1-That has been done. As I recall steering authority was poor. Fixed motor(s)/prop(s) and a rudder in the water may be a better choice.

Thanks for your reply. For sure a rudder in the water is better for steering but the water have 34.2% salinity which practically mean that any moving mechanism would get stuck hours after being soaked in these water. Thus my preference of external steering.

Any ideas would be appreciated.

What about stainless steel or carbon fiber rudder shafts and rudder posts?

iforce2d did a video showing such a setup. It’s not fantastic but it’s not terrible as a proof-of-concept.

My main sponsor EAMS Robotics has an airboat (product link) that works OK. I can’t immediately find a video though sorry.

Rover-4.0.0 will start beta testing next week (we’re calling the next version of all the vehicles 4.0.0). The stay-out zones support was the final holdup but that’ll go into master tomorrow.