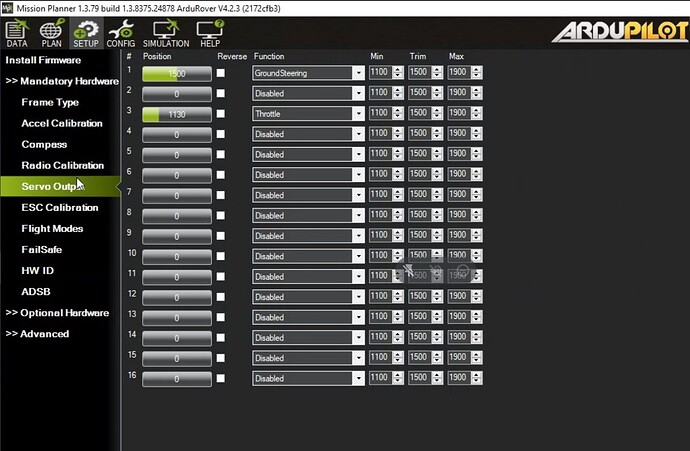 Additionally can’t push the throttle forward with the remote, even when trying fully forward. Any ideas why is this happening?

Personally I do it like this: Make first sure that the vehicle moves in the correct direction in automatic modes. When it does so automatically, but I observe that manual driving forward makes vehicle move in the opposite direction (backing instead of moving forward) I reverse the signal in the remote. And then this setup is done.

Sorry. Your robot moves backwards even when the throttle stick is on mid position and not moved at all? Even though the mid point (zero throttle) in theory is 1500, it might not be the case for your ESC. I have had to manually adjust the mid point for a boat I built (in my particular case to around 1470) to fix such a problem.

Also (not the case for my ESC above) if you can calibrate your ESC (max forward, max backward and mid point) this should solve such problems.

Might not be totally relevant for your issues, but at least worth looking into.

I did not look at your parameter file yet, but your screenshot shows the the throttle input at 1130us. which is full reverse normally. Which stick do you want to use for throttle control? Is your transmitter set to AETR channel order? I usually switch throttle and pitch, to use the pitch stick for throttle control.

I can not see any obvious problems with your config. All servo and rc settings look ok. I remember one of my rovers steering full right suddenly. All settings were unchanged and the servo was fine. After saving the parameters, setting everything to default, flashing plane/copter and then flashing rover again, the steering was centered again. I suspect a switched bit somewhere. Perhaps it is the same here.

Thanks, resetting all params to default fixed the issue. it would be good to find out why this has happened though…

It sounds like your ESC may be misconfigured or maybe it doesn’t support bi-directional operation.

There is no ESC. I am using a companion computer to read the servo output controls and send commands over can-bus to the motors. Eventually planning to change to a Lua script of the same function.

In any case the servo output is indicating what the flight controller is trying to do, and what it is trying to do is to drive backwards. I am trying to figure out why? If I disarm it is correctly sits at 1500 so seems it is set correctly to what stationary is. Additionally a parameter reset fixed it which makes this very strange, meaning a param is causing this.

Indeed, a parameter was off. I don’t know which one without comparing before and after, which you have not provided.

I suspect it was a trim value.

Thank you very much for the quick replies and all the help, it is much appreciated to receive such a quick response.
I am still worried about this original issue though because it causes the robot to be unsafe, full backwards speed as soon as it is armed.
The params I posted were the ones that caused the issue. The fixed params (for now) are simply the defaults of firmware 4.2.3, I will experiment more as I make changes.

I am not sure that this was a trim issue as you can see in the params that caused the issue, as this seems correct to me:
SERVO3_TRIM,1500
RC3_TRIM,1495

Am I missing something?