LOL… it is so cold and windy here, still single digits, that I had to try the darned thing out inside. So I “flew” the Iris+ in my basement, but in pure manual mode (Stabilize mode with geofence off) so the autopilot would not be influencing the controls in any way. I just hovered it no more then 2’ off the floor in the small open space I have. No where near enough room to actually fly it around even slowly without bumping into something which could end really bad. It seems to work great! Maybe take it over the HS baseball field later if it gets above 25 or so… and if the promised snowstorm hasn’t arrived. Winter… arrrrgghhghhh!

I’m glad you’ve got that all sorted out. Your trials helped me out with the tip on turning off the geo fence to fly without 3d lock. Thank you.

You’re welcome. I also appreciate all the tips you’ve provided. I just covered my LED wires using a split piece of heat shrink tube. The Iris is so much more than just a flying toy. This is gonna be a whole lot of fun!

I’m thinking I’m going to try to move my LED away from the battery door. Anybody else do this?

I’m thinking I’m going to try to move my LED away from the battery door. Anybody else do this?

I haven’t but will agree it is problematic and I frankly have a hard time understanding how a Quad that obviously had a lot of thought go into the engineering overall and to keep costs down, then they do this with the wiring and light.

I agree it should be visible from the same position as once you’ve hooked up the battery but it would seem there would be a lot of other ways or places to have the status light [and wiring] out of the way of some very brutal battery wire and connector.

Perhaps they could run the wire on the outside through some sort of channel and have a screw hold in the light assembly from inside the door. The cover, as it is, would be fine if you didn’t have to worry about the wire and light assembly.

I look for this to be remedied on the next generation of Iris but in the mean time, one day when I’m feeling especially creative, I’ll address this issue as a little duct tape can only do so much for so many cycles.

Speaking of that battery connector… that thing is a PITA. Not enough slack and awkward positioning. I also wish there was a main power switch.

I have over 400 flights with my IRIS and I can’t say I have any problem with that LED. I actually like it there. It would be nice however to maybe have a little foam around it.

I have even taken my IRIS apart a couple of time and found that that LED is mounted in there.

I have however lost the globe that goes on the outside as I have had a few mishaps with it.

I had also considered cutting an opening on the side of the battery door, to run the battery wires outside, a-la a Phantom customization, but the wires on the 5100 3dr batteries are too short

OK, I “dooed” it. Had to remove the pin holding the battery door on, for easy access. Used a dremel tool with a small burr cutter. Notched an opening on the bottom plate for the power wires to exit, used a small rubber groumet. Then notched the battery door for the battery wires to exit. Place the battery in with the logo facing up (wires to the left), close the door, and plug her in. Would be easier if I’d took off the bottom plate, and replaced the power wires with some longer, but I didn’t want to go that far. This works, just be careful not to grind the locking tabs on the door. 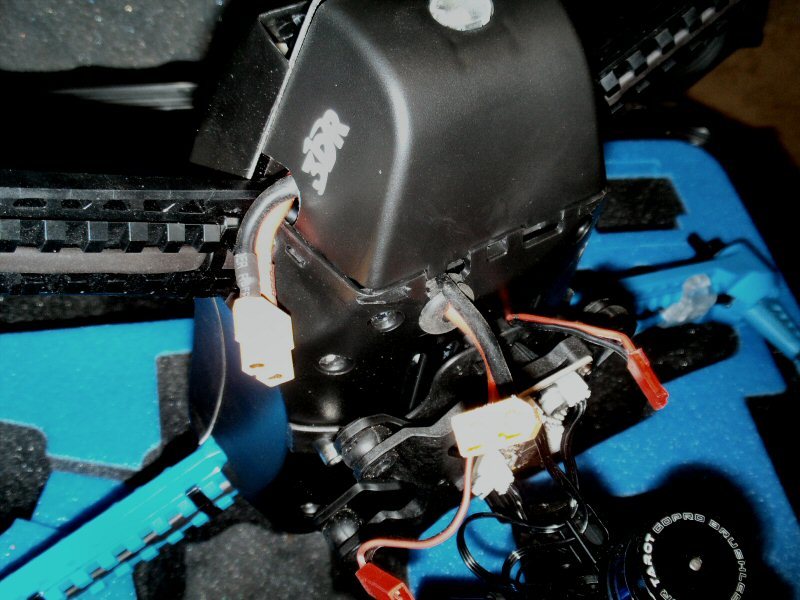 Looks like this one has gotten a little off the original subject, but here is another solution:
impconcepts.com/impstore/ind … duct_id=87