I’ll add this to the wiki when/if you get it working 'cuz the Lowrance is a popular brand. Just tell me the model etc and if possible the details on how the pins are connected (or you can do it yourself but it’s tricky the first time you do it so I’m happy to handle it).

hello RDodds, did you happen to get any results? I’m also using a lowrance sonar and would like to see the depth readings in missionplanner.
at the same time i’m trying to feed the ardupilot gps data as a NMEA stream into the lowrance.
at the moment i think i’m stuck at the bit with the rs422/rs232 convertion.

i found out though, that this convertion shouldn’t be too big of a problem. simply because of these two pictures i found. 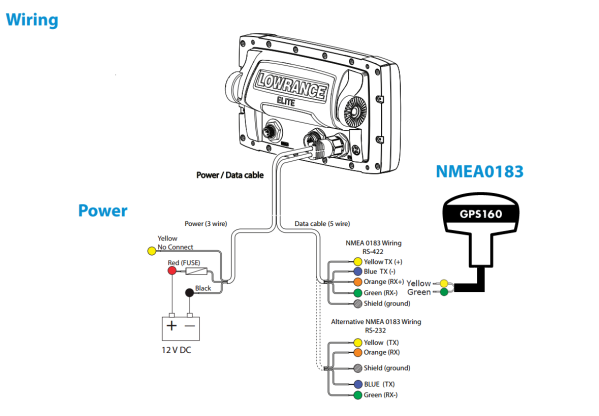 here you can see that the lowrance sonars seem to accept rs-232 by simply connecting differently.

and here is shown how that works.

i would love to hear wether you made any progress.

Thanks - It looks looks like this problem may be solved. If it is, I will put a link to the complete answer - or post it here to so the thread can be completed.

Sorry for the long delay - I had to send the unit back because it stopped showing depth. Turns out it had a software error. Works great now.

So here is the answer! 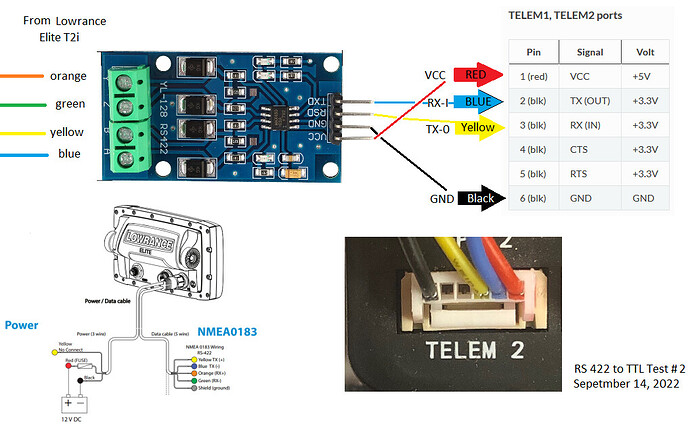 Hi @RDodds,
so summarized it is possible to get depth from lowrance to AP but not GPS to Lowrance, is that right? Because I want to build a boat using more accurate GPS (I am thinking about RTK or even buying the correction data from the government costing 2€ per day for decimeter accuracy) but I also want sidescan with accurate gps coordinates, that I can e.g. check with sidescan when I have irregularities in my data.
As i understand my only option is using depth from Lowrance and combine it with accurate gps in AP for Reefmaster (using the .log file), as I can’t input accurate gps to the lowrance and use the lowrance protocol in Reefmaster.

In theory it should be possible to send GPS data (with nmea) to lowrance.
But I couldn’t get it to work until now. And I didn’t find out yet what the cause is.

I also don’t know if the autopilot outputs rtk corrected data if you set a serial port to GPS/nmea output.
If not you’d need to send the rtk data from your ground control to the boat.

As I said: should be possible. But noone managed to (as far as I know)

Hi, if the autopilot is using an RTK GPS and its position is sent to the Lowrance (by setting the SERIAL_PROTOCOL = 20/NMEAOutput) then it the Lowrance will receive an RTK corrected position. In fact, the position output from the autopilot is not just the GPS position. It is the position from AP’s EKF which is better than the GPS because it is a combination of GPS+Accelerometers.

By the way, AP 4.3.0 has an important fix for the NMEA output which should greatly its accuracy. The lat,lon numbers were being truncated meaning they were off by up to about 1 meter.

Didn’t know that Ryan. Thanks for the clarification. That’s not what I would have thought and speaks a lot for how good the arudpilot software is. This makes it even more interesting to feed the lowrance with the arudrover GPS data.

Out of the possible causes I identified, I somehow think that it probably is that my elite ti is too old.
I’m hoping for someone with a newer lowrance model to try this. Or maybe I find a good enough reason to buy a new lowrance sonar.

That all being said, using sonar with rtk throws up some other problems. Surely your readings will get more exact. But you’re combining two systems. One with centimeter or decimeter accuracy with a sonar with meter accuracy.
Depending on the frequency and sonar you’ll always measure a cone of multiple meters wide. So you’ll never get an underwater map with centimeter accuracy. Unfortunately. But rtk would greatly help to produce sidescan mosaic, which is what I’m after. To produce a good mosaic, the boat is supposed to drive really straight lines. And as far as I can tell it actually does, even without rtk. But the sonar has its own (worse) GPS and thinks the lines are not as straight.

Simply feeding GPS into lowrance would get rid of this problem. I’m on it, but don’t have that much time on my hands as I would need to fix the problem.
Maybe next year. I’m not letting lose!

I’ve finally created a PR to add this info to the wiki. Sorry for the delay!

@rmackay9 Do you know if it is possible to get something out of the WASSP sensor?

I’ve never looked at the WASSP sonars before but from looking at their website it seems they probably have an ethernet connection. AP doesn’t yet support Ethernet but it is coming within the next year I’m sure. After that I think we would need to write a driver to allow AP to send position data and receive distance data from the sensor so it can be logged and sent to the ground station.

If the sensor already has a serial interface then it’s possible we could write a driver now without waiting for Ethernet support but I can’t figure out from the web page whether such an interface exists.

In general I’m happy to write a driver if I can get my hands on the hardware somehow.

Don’t know if it can be of any help:

Furuno is the distributor for wassp products.

Hi @Holly918,
since. I am working on a school project right now, it depends if our sponsor gives us enough money to buy the lowrance elite ti2 or if we have to use only a normal sonar (no sidescan). I agree on your point with the cone, but I think using chirp it can be quite accurate nevertheless.
So there are two options:

I don’t know if it’s possible to do both at the same time since getting depth is using serial settings in rangefinder and the other one uses the NMEA out setting.

Thanks for the comments. Theoretically it should be possible for the autopilot to send position information to the sonar via NMEA and also receive the depth information back from the sonar (also via NMEA) all using the same serial port. If it’s not possible then it is a restriction within the sonar I think.

Hi @rmackay9 ,
so the setting SERIAL_PROTOCOL = 20 (NMEAOutput) should be able to send GPS and get depth data at the same time, but [SERIAL2_PROTOCOL] = 9 (Rangefinder) and [RNGFND1_TYPE] = 17 (NMEA) is Input only?
Did I understand that right?

With the autopilot’s serial ports in high demand this isn’t ideal clearly and we have a to-do item to allow multiple features/subsystems to share a NMEA port.

Thanks for pointing this out.

@rmackay9,
now it make sense, thank you for the clarification. I am looking forward to try it out, if our sponsor gives us enough financial support. If we get the stuff i will post an update on this thread. Thank you for your help.

I’ve found the reason why the GPS data wasn’t appearing in the lowrance. This doco above has a couple wires around the wrong way. It doesn’t affect the lowrance sending depth to pix, but it is on the receive wires - so lowrance wasn’t receiving correct data from the pix.

The green and orange need to be swapped at the RS422 adapter.

Previously I got bidirectional intergration (GPS and depth) working using a RS232 adapter, but i really struggled with the RS422. On the early HDS lowrance range, only the bigger units support RS232. But all of them support RS422.

The online doco is conflicting/poor on what Y Z A B pins are for so it took some experimenting to solve the puzzle.