Loiter Turns in missions - clockwise only?

Trying to get my quad to circle around things using missions written from MP, but I can’t change direction. The notes at Copter Notes show a Direction field, but that is not labelled in the current MP and there appears to be another unlabelled field as well. I have created a simple mission with 2 separate orbits, with +1 in the fields in one and -1 in t’other as in the piccie, but my quad just flew clockwise. Any ideas? 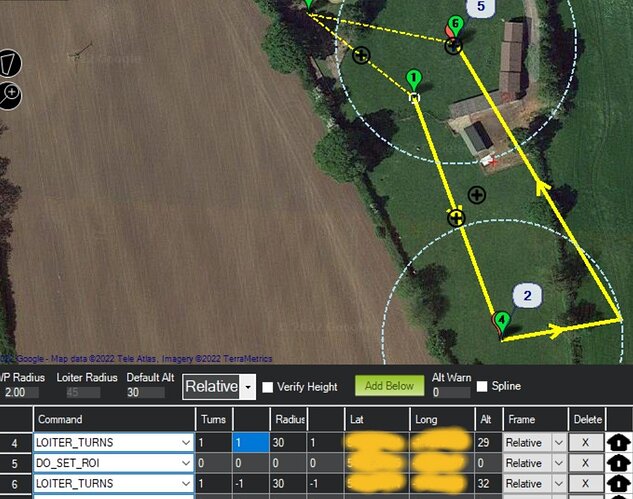 Use a negative value for the CIRCLE_RATE parameter for CCW.

So you can’t use the planning functions to set the direction of a turn? The notes for Loiter Turns in the Mission Command List suggest that you used to be able to. It seems a bit dumb to be only able to circle in one direction. Sure, have a default for “Loiter”, especially for airplanes, but multicopters? This looks to me like something has changed and this functionality has been lost.

Unfortunately there is a fairly fundamental limitation in how AP stores commands to eeprom that doesn’t allow us enough room to store the direction field (we use a fixed structure instead of a dynamic structure). I’m sure eventually we will resolve this but the issue has been there forever actually so I’ll update the wiki to correct this. Txs for the report.

The notes for Loiter Turns in the Mission Command List suggest that you used to be able to.

Just don’t be tempted to put a negative value in the Turns field! You will think it’s flying away…

Ok, thanks for that. Just a suggestion for a fix - I am going to presume that there is a variable in the routine that stores the CIRCLE_RATE parameter - would it be possible to have a mission command e.g. DO_REVERSE_CIRCLE_DIR that simply multiplies that variable by -1? That would avoid having to change a fixed structure, but use the dynamic nature of variables. (I have to confess that it is a long time since I have coded anything more complicated than an Excel macro and have certainly not looked at the underlying source code).