There is an incredibly useful feature in QGroundControl to show what Mavlink messages have been received from the drone.

Is there a way to easily see which Mavlink messages have been sent by QGroundControl to the drone?

Sure, use a daily build and QGC->Vehicle mavlink traffic shows up in the mavlink inspector. This trafffic is also saved in telemetry log files.

Not sure about that. But ArduPilot does log into dataflash commands
received.

I downloaded 4.0.11 released 13 hours ago but it does not appear to log outbound Mavlink messages. e.g. I have QGroundControl configured to send heartbeats but the inspector screen still shows heartbeats at the 1Hz as received by the drone.

I’ll try the dataflash logs. Thanks.

I have downloaded a .bin file from QGroundControl and looked at it with mavlogdump.py.

Is my thinking correct?

use a daily build and QGC->Vehicle mavlink traffic shows up in the mavlink inspector.

Ah I see, I must have downloaded the new release which by chance came out within the last day. Which branch?

Am I able to find the Appimage in Travis CI somewhere? Thanks.

Okay, looks like Stable_V4.0 which according to Travis CI is uploaded to “builds/Stable_V4.0”.

I went to https://travis-ci.org/github/mavlink/qgroundcontrol/builds/Stable_V4.0
but it is invalid. :-/

Not sure why you are pulling builds from Travis. Pull builds from the QGC web site: http://qgroundcontrol.com. The Download dropdown gives you access to both Stable and Daily builds.

Ah, got it. Much easier thanks.

I have it running however I am seeing a heartbeat at 1Hz only whereas I thought QGroundControl also emitted a heartbeat.

There is also no way to distinguish between messages sent to the drone and messages received from the drone. It has also occurred to me that there is no facility to run the Mavlink inspector in the background while you start a mission (for example) so there is no way to see those outgoing mission messages anyway.

All in all, it looks like only messages that are displayed are those received from the drone as before.

Please see the image below: 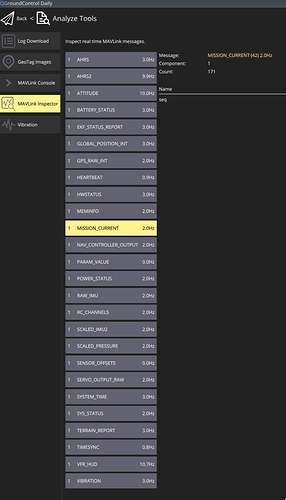 I think we could do with a better description on that one.

Thanks, but sadly this feature is only enabled for Arduplane, not Arducopter.

Basically the Log_Write_MavCmdI() function is called to do the logging and I only see that in the Arduplane code.

I am packing my messages with mavlink_msg_command_long_encode and it turns out that MAVC is what I want. Yay!

Daily builds are in the store. The daily build doc page which I linked to: https://docs.qgroundcontrol.com/master/en/releases/daily_builds.html correctly has details and links to it on the store.

I have it running however I am seeing a heartbeat at 1Hz only whereas I thought QGroundControl also emitted a heartbeat.

You need to save a telemetry log and replay it to see outgoing messages. You cannot do this live. When you do this you will see and extra combo box show up which allows you to pick the id you want to show messages for. If you have changed it from the default the system id for QGC is 255. Your vehicle will be some other id.

I am aware of that. You just repeated what I said.

The point was if there was a link to apk and not the store.
Sort of like if I wanted to download to system without google store loaded.

Thanks, that sounds ideal.

For others reading who have Windows, I note that Mission Planner also has an inspector tool which can run in the background and show a list of both incoming and outgoing messages.