Launch Point not showing up

I am new to drones but have successfully built one using a pixhawk. While it works in manual mode I would now like to try it in autonomous mode. I made a flight plan and set takeoff and landing points but for some reason only the landing point shows up on the map while the takeoff point only shows up in the list of points. Can anyone tell me how to fix this? Thanks. 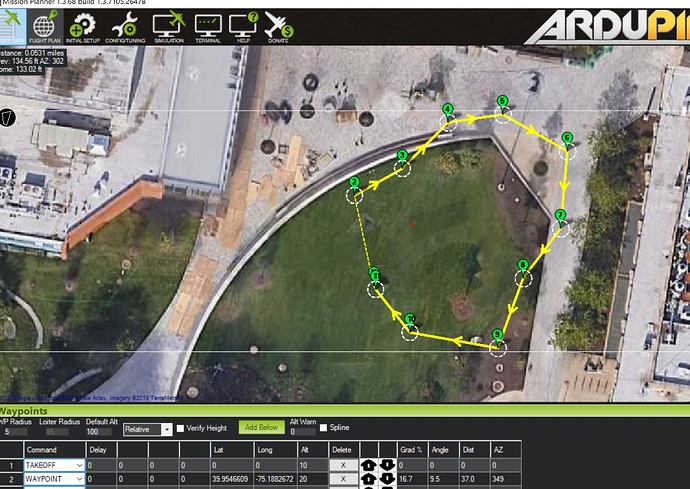 The takeoff point will be where ever you arm the UAV and launch, so it’s dynamic.
It’s important to be aware of where the 1st waypoint is in relation to setting up on the ground and arming. Watch out that you’re not in between the craft and the first waypoint or it will attack you. Try to set your first waypoint at some height and roughly straight above where you expect to launch. That way the craft will fly straight up with minimal sideways travel. I wouldn’t worry about setting a takeoff point.
In your mission you can put a RTL instead of a Land waypoint and the UAV will return to the launch point (obviously) instead of landing at a pre-designated waypoint - if that’s what is desired.
You can start a mission two ways:

Probably always a good idea to Arm and fly for a minute or two in your normal flight modes first to make sure everything is working OK - check that a GPS enabled flight mode like Loiter works before trying Auto. Then you can land, disarm and start over in Auto mode if the idea is to have an autonomous launch.
If you’re using spline waypoints set the first waypoint (at least) as a standard waypoint - then you know exactly where in space that will be. Probably even set your last waypoint as a standard waypoint too. Spline waypoints give a “3D” path so the craft may fly in a curve higher or lower (or further off track) than what you expect in order to reach the next spline waypoint.