Well I tried it today with these parameter settings:

With these set the flaps never deployed even though I slowed down past the airspeed thresholds.

So I will try also setting the LAND_FLAP_PERCNT to some value, maybe 50% and test it again.

This is not clear in the wiki instructions.

After searching through the history of Arduplane posts related to flaps I cannot find an example where anyone actually got them to work.

Does anyone have experience and know of some tricks or undocumented steps that are required. The instructions and concepts seem simple enough, however; I cannot get them to automatically deploy on landing approaches.

They work perfectly using my manual channel 7 3-position switch on the transmitter.

in MANUAL and FBWA mode, i have the same experience as you and switch the flaps manualy by transmitter. I suspect that the automatic extension works only in Auto-Mode while Landing ?

I was flying in AUTO mode with a flight plan that includes a landing approach. The flaps did not deploy.

Just discovered that my parameter SERVO7_FUNCTION was not set to 3 as instructed in the first paragraph of the wiki that I carelessly missed.

Will try again when it stops raining and report.

Tried again but the flaps (spoilerons in my case) did not deploy. This time I think the plane never slowed enough to reach the air speeds at which the flaps were programmed to deploy.

Increased those speeds and will try again next week.

Is there a way to bench test whether or not the flaps will deploy according to the airspeed schedule?

I can manually throw the 3-position switch on my transmitter to make them move, but I want to see if the airspeed changes will also make them to deploy.

The FC being inverted understands that it should not move

Fourth:
to check at home:
TKOFF_FLAP_PRCNT = 80 (by example)
Change to mode AUTO

Then the flaps should move.

Thanks so much for your help Aticof.

I did not have the flap channel reversed nor the Tx channel inverted. I made those changes, and also set the takeoff flaps to 50%. Then I re-calibrated the transmitter in Mission Planner.

The flaps still do not deploy when I go into AUTO mode.

Could it be that I am asking the flight controller to use flaperons in connection with this feature?

Does the plane have to be armed for this to work?

Thanks so much for your help Aticof.

I did not have the flap channel reversed nor the Tx channel inverted. I made those changes, and also set the takeoff flaps to 50%. Then I re-calibrated the transmitter in Mission Planner.

The flaps still do not deploy when I go into AUTO mode.

Could it be that I am asking the flight controller to use flaperons in connection with this feature?

Ailerons on channels = 1 and 5

Does the plane have to be armed for this to work?

It is not necessary to have the armed plane to test it
When you recalibrate RC, do you leave the flap sw in neutral position?

Ok, I think you are saying to calibrate the radio when the flap channel (7 in my case) is in the middle, or neutral position. I have my flap channel on a 3-position switch to get up flaps (no deflection), half flaps (a little deflection) and full flaps (full deflection).

Both of my flaperon channels servo1 and servo5 are reversed.

With the flap channel 3-position switch in the middle position (1500us), I recalibrated and rebooted. But the flaperons still do not move automatically when I go to AUTO mode with the takeoff flaps set to 33%.

Not sure if I need to have servo7 function set to 3 since there is no seventh servo output, and the flaperon instructions imply that the auto function is already set.

I tried re-calibrating with the flaps in the “flaps-up” position. Still no good result. I am going to give this a rest for a few days and pick it up again when I am fresh.

At this point I have:

Flaperons configured to go up when deployed, so technically they are spoilerons. They are controlled from the RC transmitter by a 3-position switch to give three settings: None, half, and full spoilers.

The setup works perfectly with the 3-position switch when in manual mode, however; the spoilerons will not automatically deploy in AUTO mode for either the auto takeoff setting nor the auto landing settings.

Found another possible configuration error in my setup:

I had dual aileron servo mixing set in my transmitter. The ArudPlane flaperon instructions say to remove all aileron mixing and simply have aileron control go on channel 1.

I removed the mix to my second aileron servo and kept the ArduPlane flaperon mixing in place. In manual mode the ailerons and flaperons still work fine, and attitude corrections work correctly in AUTO flight modes.

I tested the flaperons by setting up a FBWB mode switch. When I switched to FBWB and went to a low throttle position the spoilerons indeed moved. I’ll remove the FBWB setup before test flying. My test will involve the airpseed schedules set up for auto-landing.

Had two test flights today. The plane landed much closer to the programmed landing spot, however; I could not at the time tell whether the spoilers deployed or not by watching the landings.

I looked later in the logs and think the spoilers did indeed deploy. See channels 1 and 5 (aileron right and left, yellow and red) “open up” a bit when channel 7 (flap channel, white) goes from 1100 to 1300us. 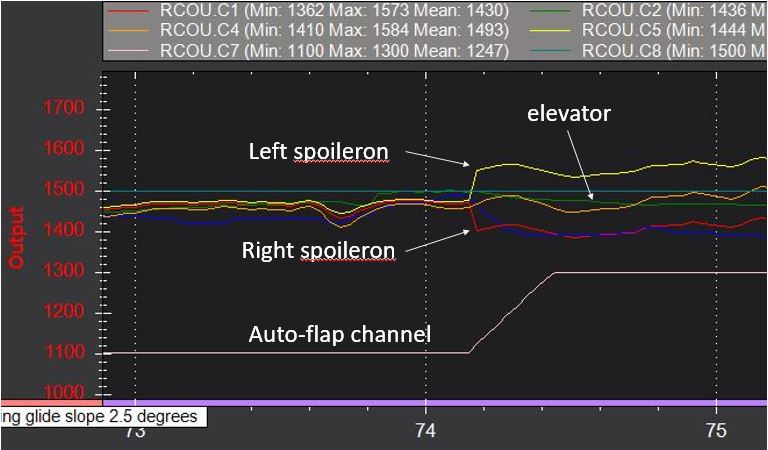 It also looks like channel 2 (green) started adding some down elevator to correct the trim with the spoilers deployed.

Here is an example where both the first and second flap positions were activated. Note the two deflection points on aileron outputs 1 and 5 and the associated changed in flap channel 7.

Congratulations @flyingw, I’m glad you got things working as expected! I would love to see a video of your autolandings!

Thanks. I have the features working, but still am trying to get a nice flared landing near to the programmed landing spot. I keep getting long overshoots.

I can get the plane to ditch right on the spot, but I have not yet found the magic in getting a nice slow approach, flare and spot landing.

Very interesting challenge though, and amazing how ArduPlane supports it.

The main things I modified were

LAND_FLARE_ALT
TECS_LAND_ARSPD
TECS_LAND_SINK – this one was causing “ballooning” at the flare point – so consider increasing it to bring the plane down quicker.

Using the flaps are not always necessary to obtain a slow and smooth
descent. I think it is more important to have a good setup of the
parameters involved in the descent. I leave a link with my configuration in
case it serves to help someone. in the PDFs for download you have the
parameters that I use.