I am having some trouble getting Yaapu telemetry working with a Matek H743, Jumper R8 and Jumper T16.

When I go to discover new sensors on the T16 none are found. I’ve tested on all of the serial ports with serial protocol 10 (passthrough) and baud 57 and have swapped the TX and RX around just in case I had them mixed up. I have tested this on two different R8 receivers.

I was able to perform a test with a Radiomaster R168 that has an S-port connection just in an effort to test that the radio could detect new sensors. Sensors were detected by setting the serial protocol to 4 and setting half duplex but obviously Yaapu requires Passthrough telemetry to work.

Does anyone have any advice on what I could check or change to get this setup working?

I have several R8s running from Matek F405 to my TX16s. They’ve been solid for me. You shouldn’t have to discover sensors for Yaapu telemetry to work. It should work on Serial protocol 10. It looks like you should have everything in order, but I’ll be in my work shop later today and I’ll go through all the settings I have for mine and see if there’s something missing.

What UARTs are you using on the H743?

Thanks for the response.

The first serial connection I tried was TX/RX 7 which is serial 1 on the H743, when I couldn’t get that to work I tested all of the serial connections. All were tested with protocol 10 and baud 57, each time I swapped the TX and RX wires to make sure I didn’t have them the wrong way. Serial options were set to zero.

The only other serial device I have connected is the SBUS from the receiver.

I have a Matek F405 STD that runs Arducopter that was in a now defunct project that I had Yaapu working with, I will use that to do a test.

Am having same exact issue, matek H743, frsky rx8r, yapuu and arduplane 4.1 dev… This is most definitely a bug on Ardupilot because same setup works if u load Inav on the same FC and wiring… So that rules out any cabling or peripheral issue and only leaves ardupilot as the problem… Is there a bug raised on this?

I haven’t raised a bug for this.

I mentioned above that I would test a spare Matek F405-STD I had laying around. It has the same issue. I can’t get Yaapu to work with that either.

I was reading this thread regarding some issues people are having with the F405-STD and Yaapu. I’m wondering if the same issue exists with the H743? I haven’t taken the H743 apart but does anyone know if their are resistors to bridge on the H743.

The Jumper R8 will work with the F405-STD and Yaapu. I’ve since switched it to CRSF because… I’m a sucker? (Read: I was having too easy of a time with the R8 so I need to make things more difficult)

The 743 seems to be a different beast with its own quirks so I can’t offer any specific assistance there. But if you want to post your param file for the F405 I’ll see if I can make any suggestions.

Resistor to bridge? For what? H743 works fine for me with Yaapu telemetry.

It appears to be a problem with the flight controller. I have tested the Jumper T16 and the Jumper R8 in an alternative setup and was able to get yaapu working. I have a spare unused H743 I will set that up in the coming days and test it.

Tested with the spare H743 and it is indeed a hardware fault with the flight controller.

Out of interest, how have you wired this? I’m using an R-XSR with my F405-STD (see link to my thread posted earlier in here), but I might get another to use with my R8 but wasn’t sure how to wire it with the R8 being labelled as having a separate RX & TX for telemetry but unlike my pixhawks these boards only use one uart for tx/rx rather than separate so which did you use?
Thanks

The RC signal I connect to the S-bus pin. The telemetry I connect to an available UART. Either TX3/RX3 or TX4/RX4. I connect both the telemetry pins on the on the R8 to the TX/RX pins on the FC, and either I’ve been incredibly lucky, or it doesn’t matter which one goes to TX or RX. I think I read somewhere that the two pins in the R8 are already shorter together but I can’t remember where I read that and I’ve never tested it. 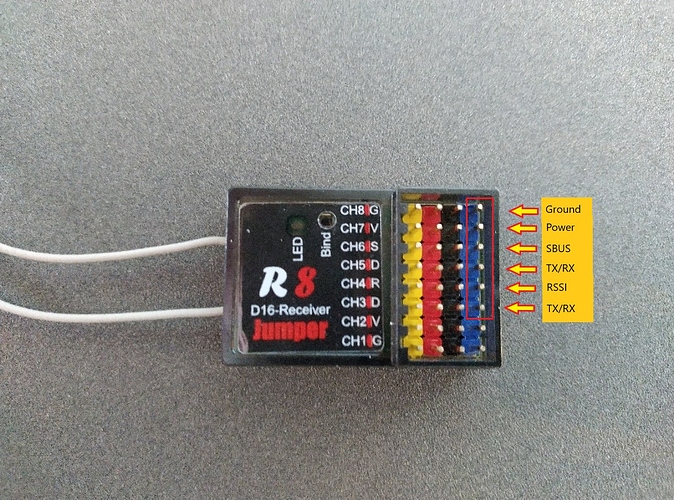