Is it possible to beat drone jammers?

Hi everyone,
I just made a bet with some local professional jammer manufacturer who is too confident with their product.
I’ll take them out if I can manage a flyaround over their premises.

Their product is no joke though. As far as I could understand, it scans the entire spectrum and jams the suspectable frequencies but obviously there’s something more to it which they won’t tell me. 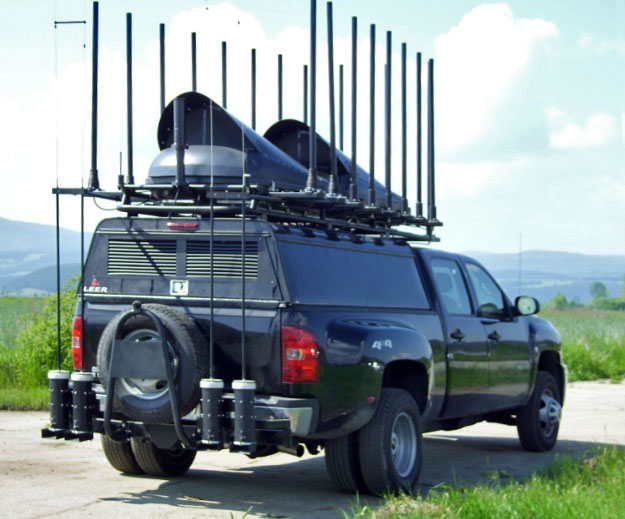 I’ve thought of below ideas for flight over a jammer-proteced zone. I’ll be obliged if you could share your ideas:

1-) Using a 27 or 40Mhz AM/FM remote (the jammer may detect this but won’t hurt to give it a try)
2-) Cable remote (there are 4gr/m cables)
3-) Infrared controller (can be modified for long range)
4-) Computer vision?
5-) Trying u-blox M8 3D Dead Reckoning GNSS chips (no idea how they perform or if manageable with arducopter)
6-) Autonomous flight without GPS (e.g. command Arducopter to take off, climb to 100m (barometer) fly north for 10 sec at 15m/sec (air speed sensor + compass), fly west for 5 sec. etc. I’m not sure if this is possible for arducopter.

Thanks in advance for your input.

For this you can just transmit at a different frequency, and use shielded electronics so there is no accidental interference

Also they are wideband fast random scanning so you could use one of the standard frequencies with hopper set to the same block of 0.1 since there are many vulnerabilities with wideband or you can use a booster if your unit have enough payload available.

I deleted the other post as it was more for advanced systems and it doesnt sound like you need a custom unit built. If you change you mind though, you know where to find me.

I would try to use as wide band as possible thus at least both 433 and 868MHz bands.
Then do low-duty (thus short packet) transmissions hopping over the wide bandwidth so they can’t easily figure out which is the next frequency you are going to use.
Transmission from the drone can be faily weak: like 1mW or lower so they are difficult to differentiate from the other transmissions (non-drone) on the same band. Drone can transmit very weak signals as the range in the air with a proper receiver on the ground can be huge. Like we in OGN are getting 100km or more on 10-20mW in 868MHz. If you just need like 1km range likely below 1mW is enough. Thus do everything to hide drone transmissions in the background so they don’t even realize the drone is transmitting.
At same time you could make fake transmission say on 433 MHz to make them believe this is what they want to jam

- lot of tricks can be played.

433 and 868 is not going to help you, these are common extended freqs ie remote keyless entry alarms, dragonlink etc. Signal hopping is appropriate but not in this measure, and transmitting fake frequencies isnt going to further your goal, this is not the cold war where we are trying to decrypt your intentions real time, all your doing is adding another beacon saying shoot me down lol.

How to beat them?

Option 1) control your drone via mobile phone network of your choice. If these guys try to jam LTE/GSM/UMTS frequencies, they will quickly make new friends

Option 2) give the FCC or equivalent regulatory body a call - hard to imagine that these jammers are licensed to send in the whole spectrum. After their equipment has been seized, make your flight