I want to load Arducopter on a new Holybro H7 board and I understand the first step is to install the bootloader.

The below wiki below suggests using STM32Cube Programmer.

Do you use ‘Open file’ to select the board xx.bin file and use the above address? i.e., the same process you would use if loading a Arducopter xx.hex file.with STM32Cube Programmer? 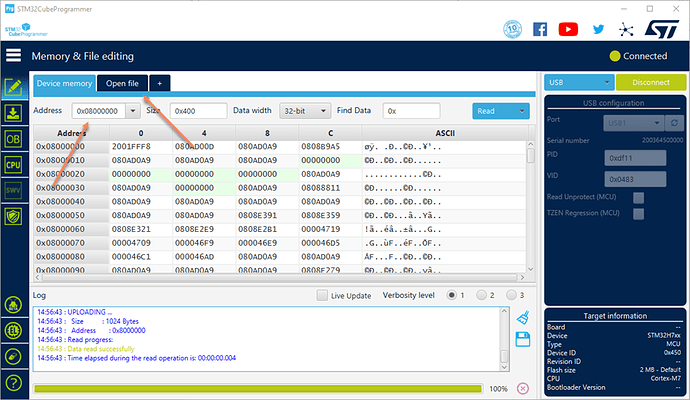 Here are the instructions I used today to Loading Firmware onto boards without existing ArduPilot firmware. It has step by step on how to do so. Works like a charm as well.

So you used STM32Cube to load the ArduPilot bootloader?

yes I choose the firmware with arduxx_with_bl.hex firmware, which includes the bootloader. what holybro H7 are you talking about are you able to get the board into DFU?

firmware with arduxx_with_bl.hex firmware, which includes the bootloader. what holybro H7 are you talking about are you able to get the board into DFU?

H7v2 and downloded the xxx_bl.bin file which i thought was bootloader only??. I can get it into DFU ok. Just wasn’t sure if it would work that way?.

I understand the first step is to install the bootloader.

Just use the above mentioned route that is linked and make sure and use the xxx_with_bl.hex.
the with_bl means with bootloader so it will install the bootloader and the firmware all in one swoop. after this you will not need to use stm32 unless its the way you want as Mission planner will see it with the ardu bootloader and you can flash firmware from there after this.

Got it sorted!
Used STM32CubeProgrammer and the “arduXXX_with_bl.hex” file. Worked a treat!
Thanks for the help clarifying this!