Is it possible to get a ibus output from a pixhawk 2.4.8?
I have tried to find it already but i could only find sbus output as an option.

Sbus from the Sbus Output pin or these options from a serial port: 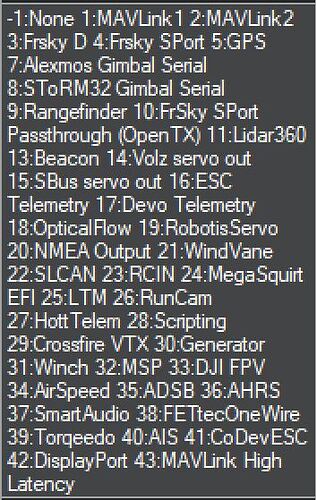 Thank you, yes i found that option.
But i am looking for an ibus output. If that is possible

But i am looking for an ibus output. If that is possible

No, do you see it there as an option? What could be the use case for that?

I am putting a pixhawk in a baitboat. The motherboard who is in it works with ibus. I had been nice if i could use that.

I don’t understand. Ibus is an RC Protocol how is it used on the Motherboard?

Thats the protocol who was used by the old reciever. Maybe i did not explane it well. My english is not perfect. Excuse me

OK. So the stock receiver used an iBus output to the boat control board? Can you provide some details of this boat?

This is the boat.

Possibly but it says it’s a 5.8GHz transmitter and I have never seen a Flysky with that. And do you actually know if it’s using iBus from the receiver? Standard PWM would be more likely. Do you have this boat?

I have that boat but without the autopilot.

With the same transmitter.

The signal goes with 1 servo cable for 4 channels.

And one for the telemetry, voltage of the battery

On the board of the reciever is ibus printed, so i assumed it is a flysky reciever, mayby upgraded to 5,8 ghz.

I’have bought a new flysky transmitter and reciever.
You can asign a pin as a ibus output. So ik think they dit that with the old one.