the situation is this, Since the spring of this year, access to the site with the firmware has stopped working. As a result, I started an investigation and the provider answered me that they did not block this site after contacting Roskomnadzor and they officially answered me that it was also not blocked. the site, after the provider did something, after my complaint This site started working on my mobile device, but from the same wi-fi from the laptop access is still unavailable. Windows diagnostics showed that port 80 is unavailable or 60, I don’t remember what to do, tell me to work only VPN. Fucking at all … I’m from Russia

Since it works from most parts of the world, the root cause is described by the last sentence of your post. Unfortunately nothing can be done from the server side…

The IP of the server did change a while ago. Make sure you don’t have any static DNS entry’s defined

What are you downloading from firmware.ardupilot.org ?
I remember that we blocked some IP from Russia because of really high demand on terrain data or something like that … 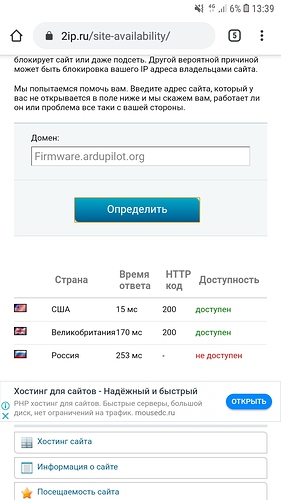 I have made a report to our person that manage our server, we will look at this issue !

I will write in Russian extract received from Roskomnadzor.

I made a request to the Russian Supervision Authority again with the attached screenshot;