How bad is this barometer really ? (Pixhawk 2.1 FE) Or how do I disable it?

Big Tarot hexacopter (960 ) with a Pixhawk 2.1 (first edition) and it wobbles in position hold ( in another topic)

Tarot X6 (960 class) Multistar Elite 5010/274KV motors with 18" props.Hobbywing X-Rotor Pro 40A escs.40,000mAh of batteries,Taranis and X8R.HERE GPS.Mauch power stuff.Pix 2.1 using the stock pads supplied.Firmware 3.5.RC8 This used to fly nice and stable using a Pixhack 2.83 and up to 3.4.6 firmware but since swapping to the Pix 2.1 (first issue,Edison capable, with stipulated mods done) it wobbles all over and generally handles like a sack of ferrets.Altitude hold doesn’t and Position hold is …

The wobbles in stabilize were pretty much cleared up in that thread but the wobbles continue in Pos Hold or other Auto modes.Like it doesn’t hold altitude well and RTL landing is notchy on the way down.I have a bit of vibration on the Z axis but a barometer that varies by around 8.5 metres in flight.Baro 2 is fine in the logs.

Could this be vibration related ? A dodgy barometer ?

Log is of today’s auto mission of 10 minutes with a lot of one minute hangs at waypoints to test this.It wavered about a lot and I almost anbandoned it more than once but just held my nerve.

it seems odd that your barometer is so noisy. My guess is that Baro1 is more exposed to the airflow compared to the one in the isolated IMU board. Maybe putting a tape on the USB port (to reduce the airflow into the cube) will help?

I doubt it’s airflow as this is on a big copter which has a cover.It’s tucked away inside quite a way from the props.I suppose it could possibly be though.It would be nice to get some authoritative help from the manufacturer as this is listed as the support forum on the Proficnc home page.

Having redundant barometers is of no use if it always defaults to a faulty one which is why I asked if there’s a work around in the parameters.

All the motors are working pretty hard, 1600 to 1900 mostly, and that doesn’t leave a lot of room for good stabilisation.
Your Zmag on compass 1 has quite a few spikes which is curious, as compass 2 is relatively clean.

Zacc shows quite a bit of noise, although not what’s regarded as critical, but it won’t help.

Looking at des.roll or pitch against actual shows an aggressive response.
Could this be the reason for the high RCout values?
If the copter is over tuned it will hunt around a lot.

There is definitely more noise on the Baro1 than Baro2.
But the Des.Alt and CTUN alt follow one another ok.

I would look more at the aggressiveness of the tune and why your motors are working so hard.
Nearly 60A for a 960 hex is a lot, as we wouldn’t use that for an Octo w/payload.
How heavy is the hex?

Thanks for those observations Mike.It helps.

It’s rigged heavy -8+Kg with most of that battery - 5Kg - to simulate maximum loadout.Looks like I over estimated a bit so I’ll reduce the battery size somewhat and look again to see what happens.It’s had a couple of autotunes which helped it’s handling in stabilize but Pos_Hold and Alt_Hold were both rubbish in real life and RTL wasn’t exactly silky smoothe.Much less accurate than I’m used to with my Pixhacks and Pixhawks.Maybe that is just the weight.I need to test that.I have other props coming too.I also think I’m going to have to learn how to hands on,manually, live tune one of these too.

All the spikes in the mag fields correspond to waypoints in the mission.It wasn’t pretty.Compass 1 is in the HERE on a short mast.

Vibes on the Z axis I am not used to.It’s pretty much hard ,mounted with the supplied pads,none of which are vibration mounts per se.

I’ll keep plugging away for a bit yet but I’m not in love with the 2.1 yet.I’d still like to disable barometer #1 though.It’s bugging me. 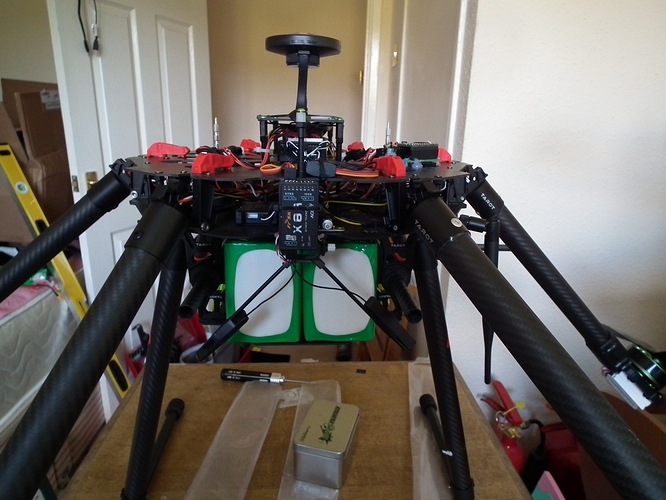 SO I installed AC 3.5.0 as it’s been released now and calibrated the compass as instructed.Everything else was left the same.I also dropped the weight by using different batteries which got it down to around 7 Kg.This dropped the RCOUT figures somewhat but did nothing to the barometer numbers.

Stabilize was a bit twitchy but ALT_HOLD and POS_HOLD are terrible which I am still relating to the barometer.It may look like it follows DAlt in the log but it doesn’t in the sky.It’s about a 2 metres ball for POS_HOLD and not a very comfortable one to watch either.

Z axis vibes seem a touch lower and still withing limits and the clipping is much reduced but this wasn’t a mission like the last log but a bit of gentle wobbling about for testing purposes.It got too windy too quickly for any tuning.

I really think I may just put a different FC on the frame to see what happens.It flew fine with a Pixhack once before and I only swapped that out to see what all the fuss was about with the Pixhawk 2.1.I think reverting may be the best diagnostic move at this point.

As compared to Pixhack baros

I’ve decided to give a different FC a try.This copter has flown well on a Pixhack before so I’ll put one in and see if it still does.That will gve me a definitive answer to my barometer question.So case closed for the moment.