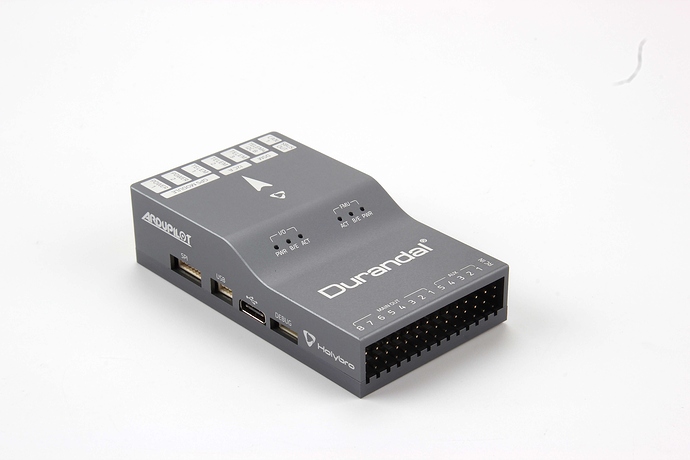 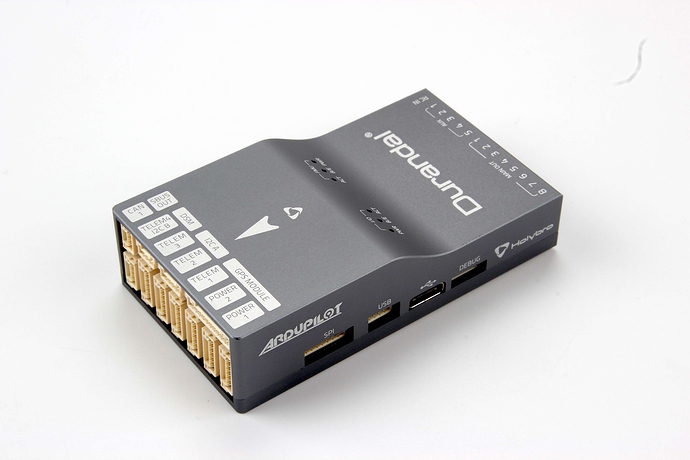 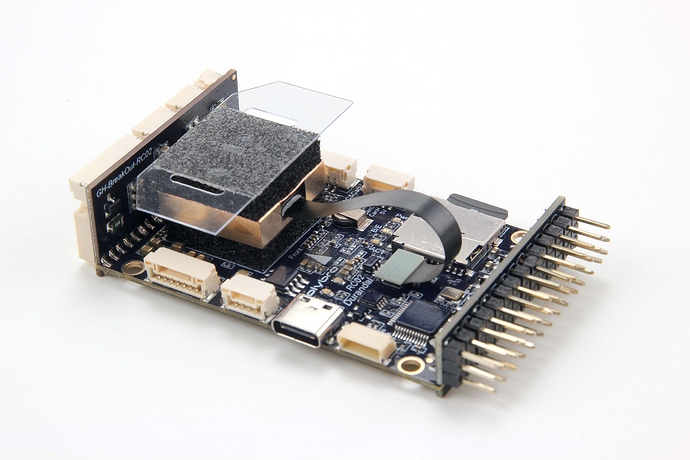 IMG_2317.JPG5184×3456 443 KB
Durandal is the latest update to the successful family of Holybro flight controllers. It was designed and developed by Holybro, optimized to run the latest Ardupilot firmware.
It features the latest advanced processor technology from STMicroelectronics®, sensor technology from Bosch® and InvenSense®, and a ChibiOS real-time operating system, delivering incredible performance, flexibility, and reliability for controlling any autonomous vehicle.
Durandal’s STM32H7 microcontroller, running at 400MHz, has 2 MB of Flash memory and 1 MB of RAM. With the increased processor power and ample resources, developers can freely implement more complex algorithms and models on the autopilot.
Dual high-performance, low-noise IMUs on board are designed for demanding stabilization applications. Data-ready signals from all sensors are routed to separate interrupt and timer capture pins on the autopilot, permitting precise time-stamping of sensor data. Newly designed vibration isolation enables more accurate readings, allowing vehicles to achieve better overall flight performance.
The two external SPI buses and six associated chip select lines allow for additional sensors and an SPI-interfaced payload. There are a total of four I2C buses: two dedicated for external use and two grouped with serial ports for GPS/compass modules.
The Durandal is the latest update to the successful family of Holybro flight controllers. The Durandal autopilot development kit is perfect for developers at corporate research labs, startups, and for academics. Durandal: the cutting edge autopilot.

This is a great board, thanks to Holybro for a good collaboration with the ArduPilot development team

This is a very nice looking Autopilot , it’s great too see a lot of thought and design had gone in and not just another clone of others.

Also having detailed technical information published is fantastic too and should be the norm for all.

Looks to be a very good controller this.

Does anyone try to use dual GPS with Durandal board successfully ? I can do this on pixhawk2 cube but failed with this board with same GPS set (1 ublox with 1 NMEA output GPS).

Reply myself. I seems my GPS2 does is not very sensitive. It takes a lot of time to get fix. Thanks all.

Is it still the Beta version?

Hi @miw01, this “Beta” has nothing to do with the FC hardware. The Ardupilot firmware used in the initial release is a beta version, but now it is a stable version. You can load the stable version of the firmware by selecting the appropriate icon for your airframe from the Firmware Tab at Mission Planner.

The firmware and instructions are also available here.

Let me know if you have any other questions.

My question is whether ”beta" means that hardware is beta.

There is no beta hardware. They are all stable hardware.

In order to get the most out of long range radio system (Dragon Link in my case), I was in a search for components that emit as little RF noise as possible. I think, I finally found a flight controller that in this respect is really very well performing - the Holybro Durandal, and would like to present to you my findings.

For the measurements I used Tektronix MDO4054B-6, a 6 GHz oscilloscope/spectrum-analyzer, together with the Beehive Electronics 101A EMC probe set. I mostly ended up using the 100A magnetic field probe for my tests as this seemed to be most sensitive in the area of interest.

Here is a picture of the setup: 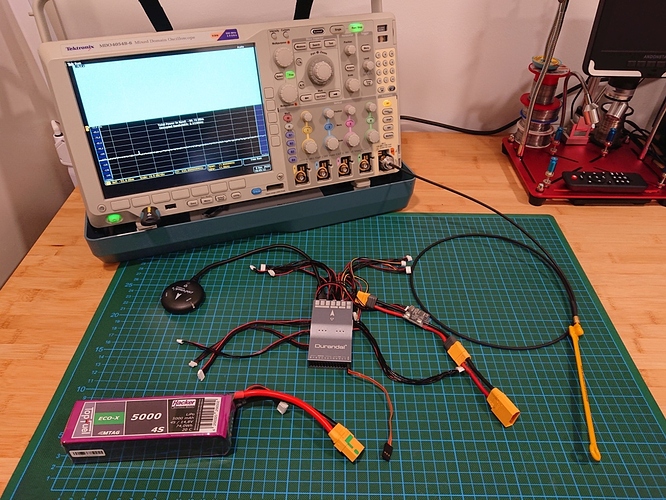 My interest was only in the frequency bands of the DragonLink LRS system, thus 433 MHz, 868 MHz and 915 MHz. I first did a general frequency sweep from 0 to 1 GHz, then concentrated in smaller windows around the three bands mentioned. When the span is smaller, the measurement is more sensitive, which is why the big sweep from 0 to 1 GHz is not revealing as much detail.

I present you the scope outputs (screenshots), by first showing the ambient measurements, as a baseline of RF-noise in my area (as I carried out the measurements in my home-office workshop that is unfortunately not a nice shielded room). The signal present in the ambient needs to be imaginarily subtracted from the remaining measurements in the respective measurement band.

First the ambient across 0 to 1 GHz: 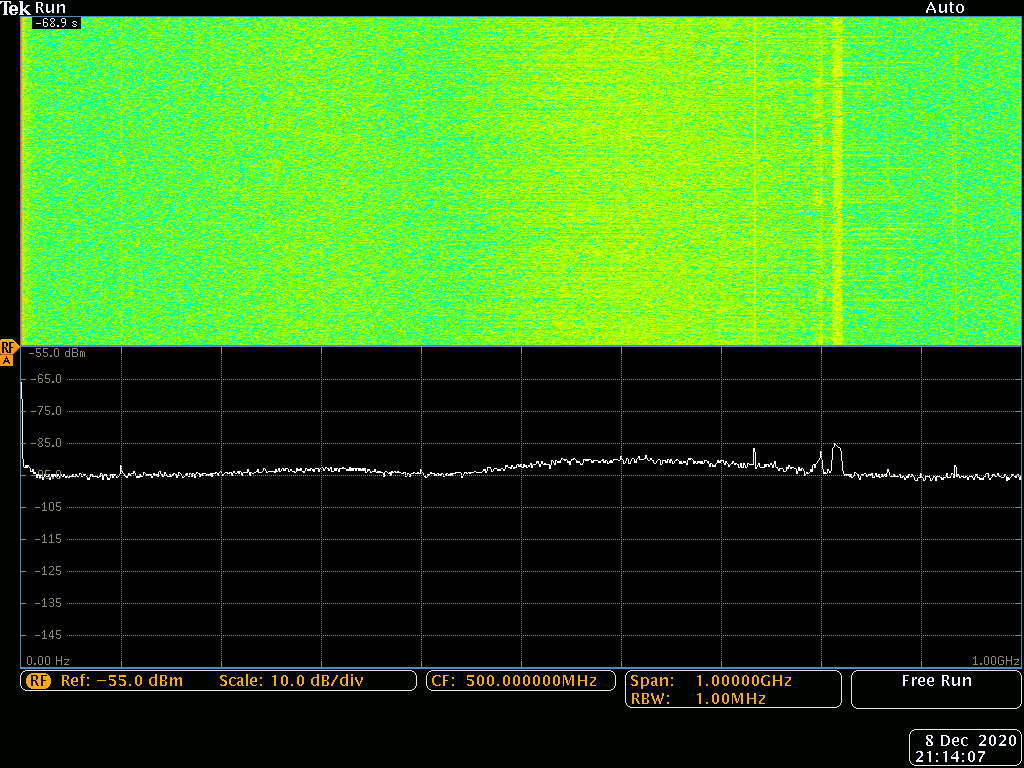 Here are some tips for viewing the attached Tektronix MDO4054B-6 screenshots:

If you are further interested in this topic, I recommend watching a 11 minute YouTube video by W2AEW about RF near field probes here to get started in this topic. Here is also a link to a very nicely written Application Note by Tektronix about EMI troubleshooting. 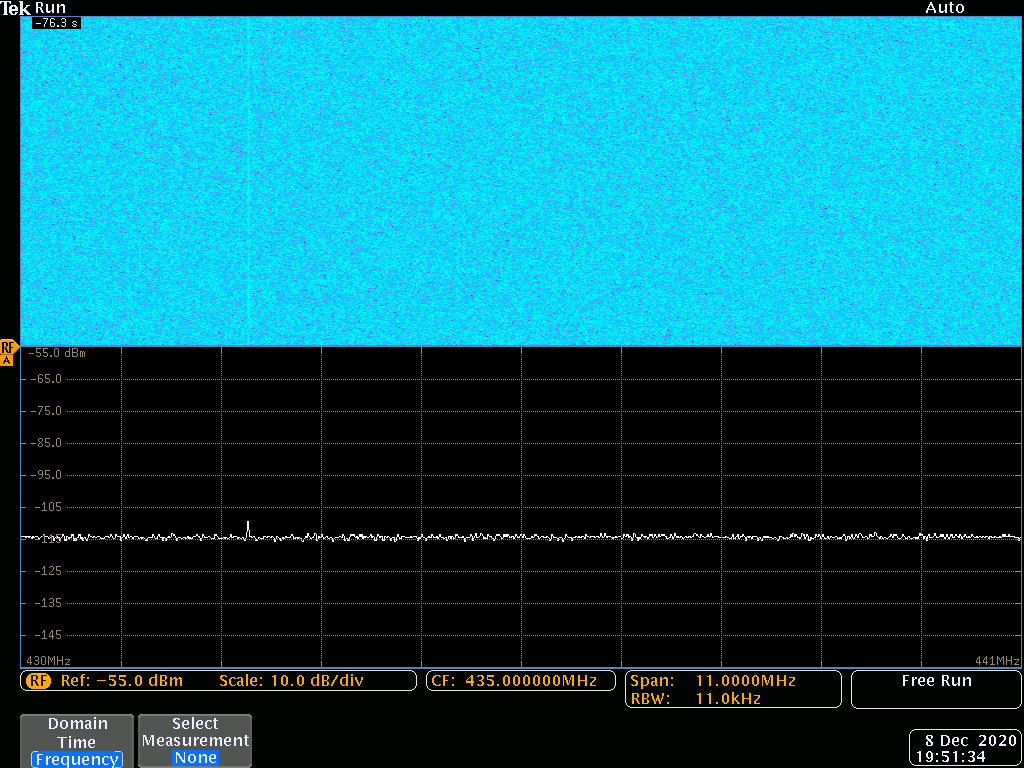 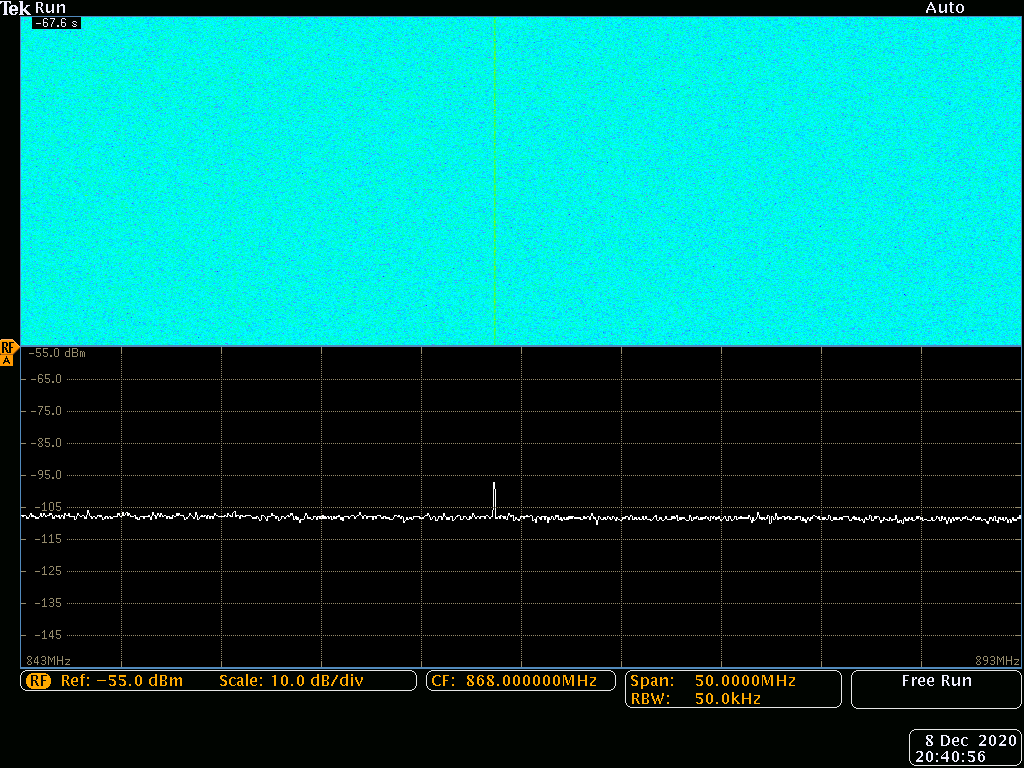 and finally close-up of 915 MHz with 10 MHz span ambient: 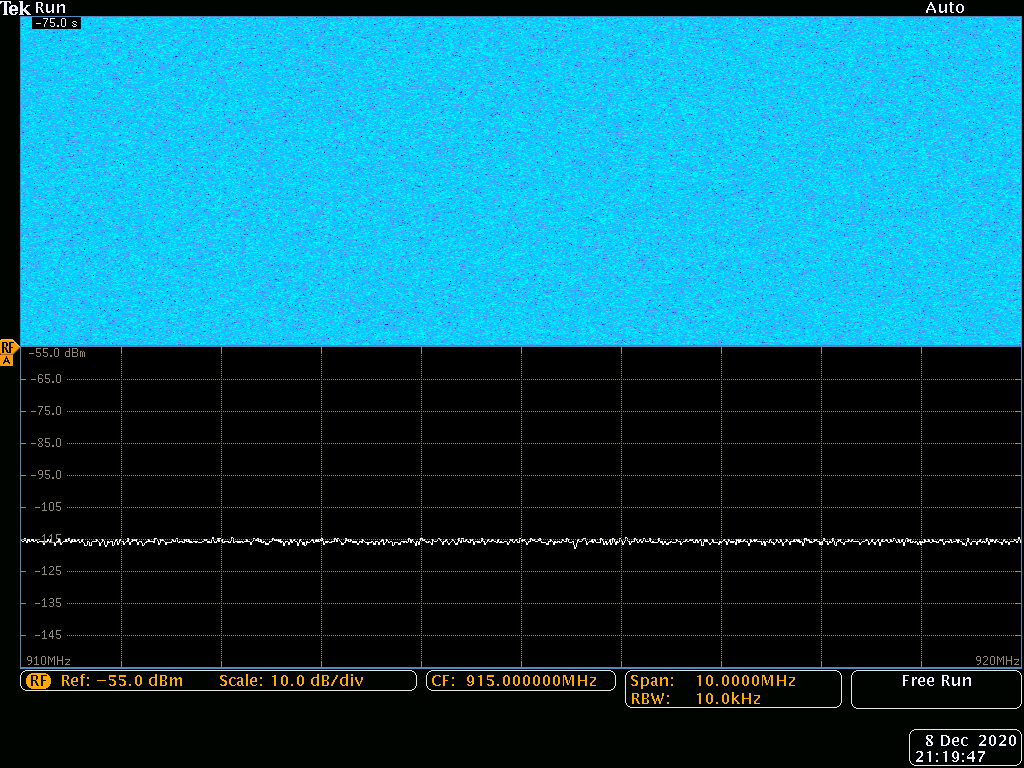 Now that we established a baseline, the measurements of the Durandal flight controller can begin: 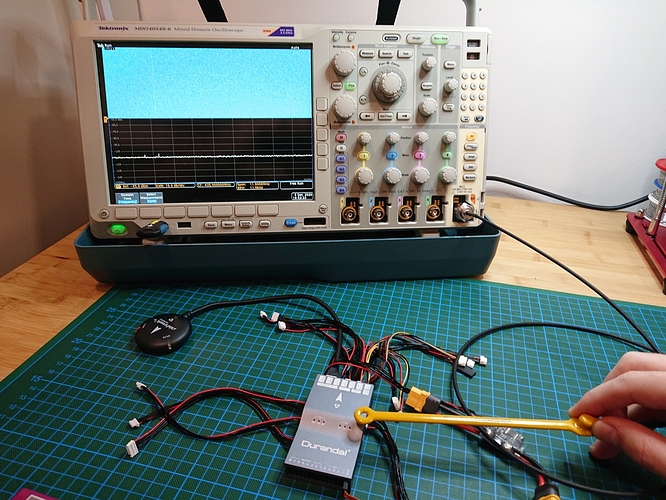 Well, as the case is out of metal, I did not see anything, except the ambient, which was expected.

To see what Durandal emits, I attached all the cables it came with, to act as maximum antennas and probed them: 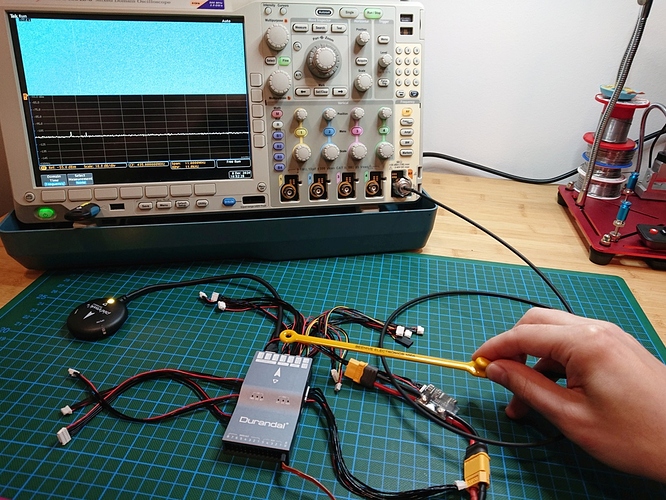 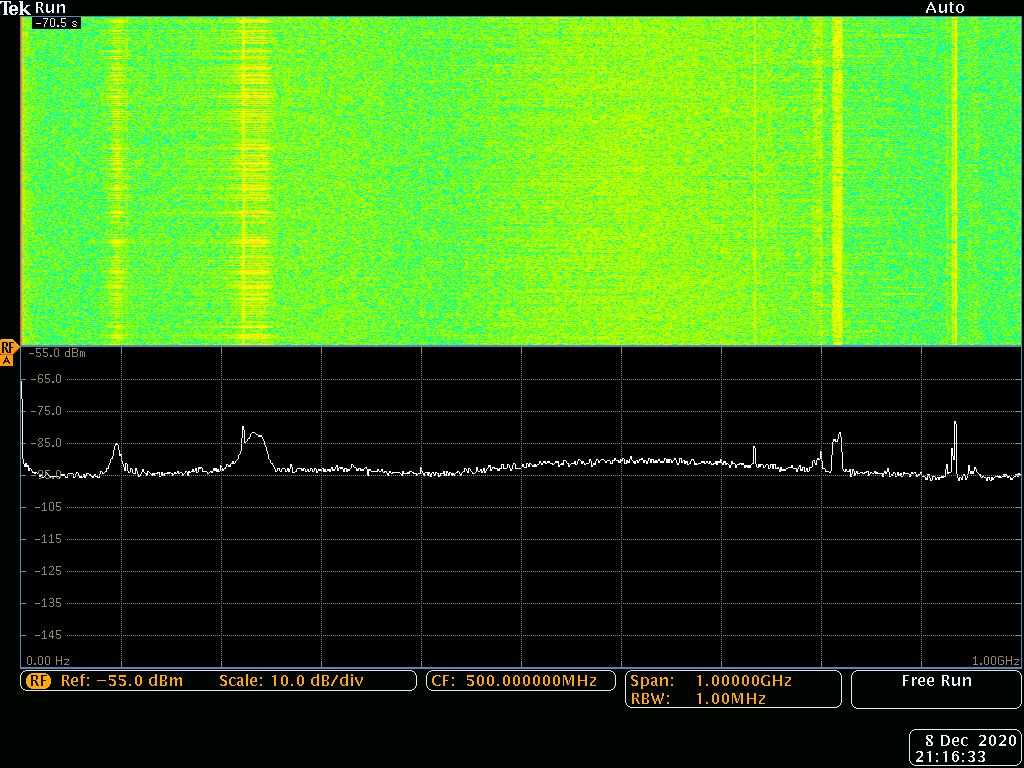 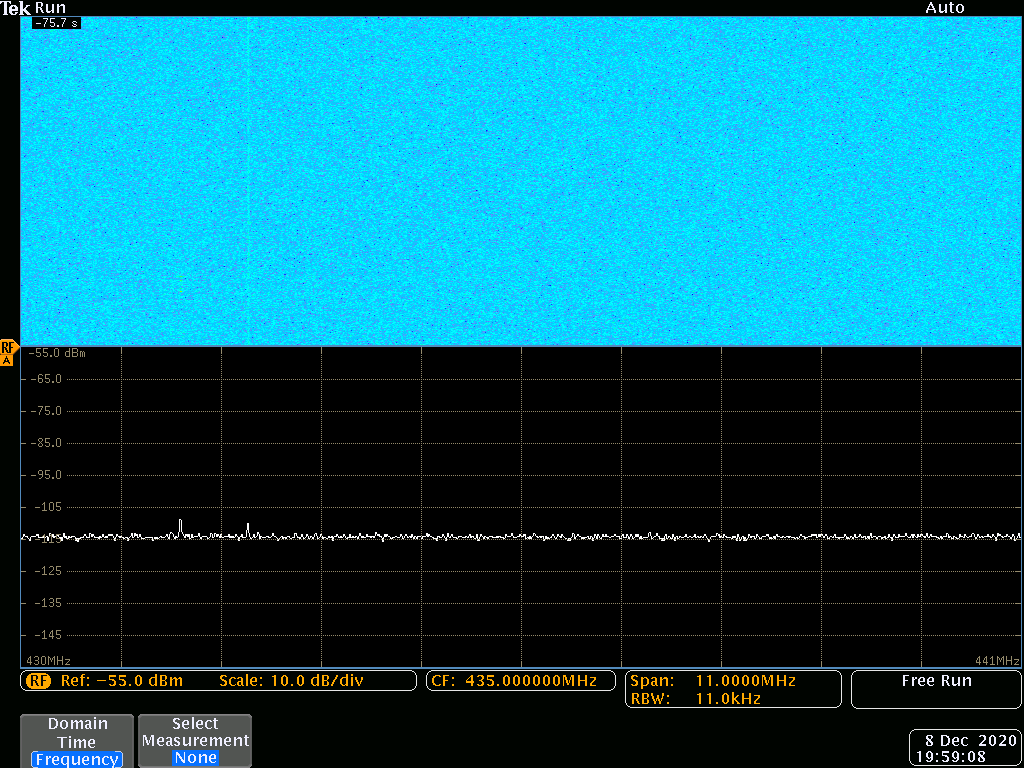 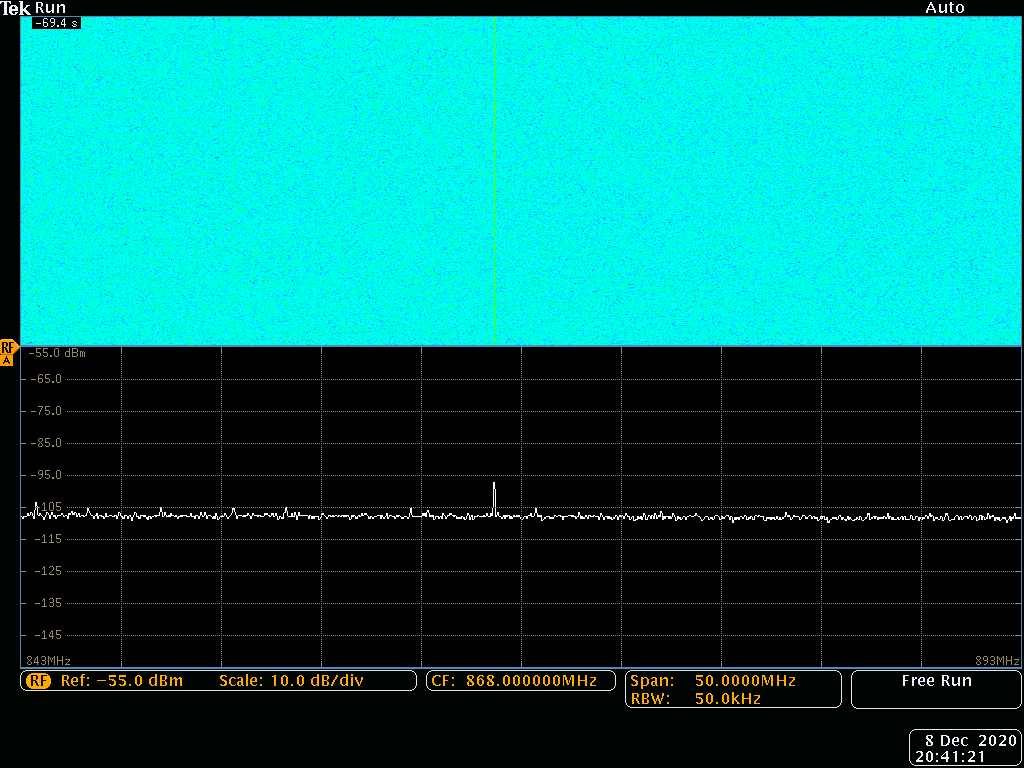 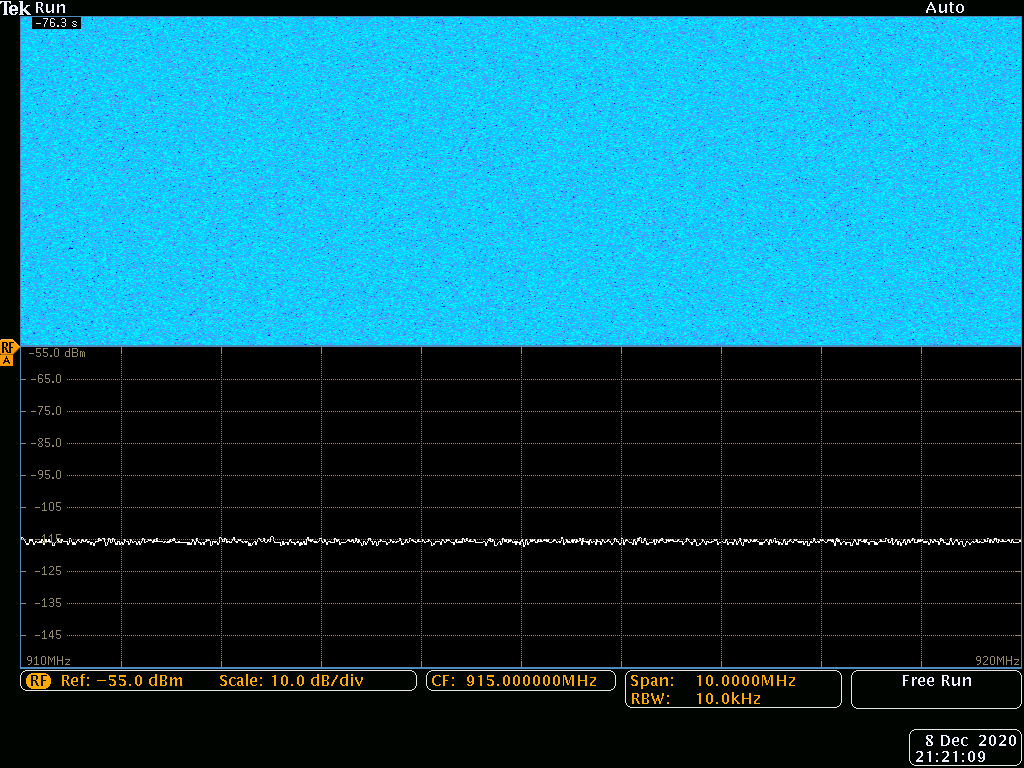 The results are awesome, basically there are no noticeable emissions from Durandal in the interesting frequencies of DragonLink system. Compared, e.g. with the results of Matek H743-Wing (that I posted in RCgroups here), it is a night-and-day difference in favor of Durandal! And it is using the same STM32H743 microcontroller as the Matek H743-Wing, so has similar powerful computational performance.

I ordered my Durandal with GPS and PM02 v3 power module, so had a closer look at it as well: 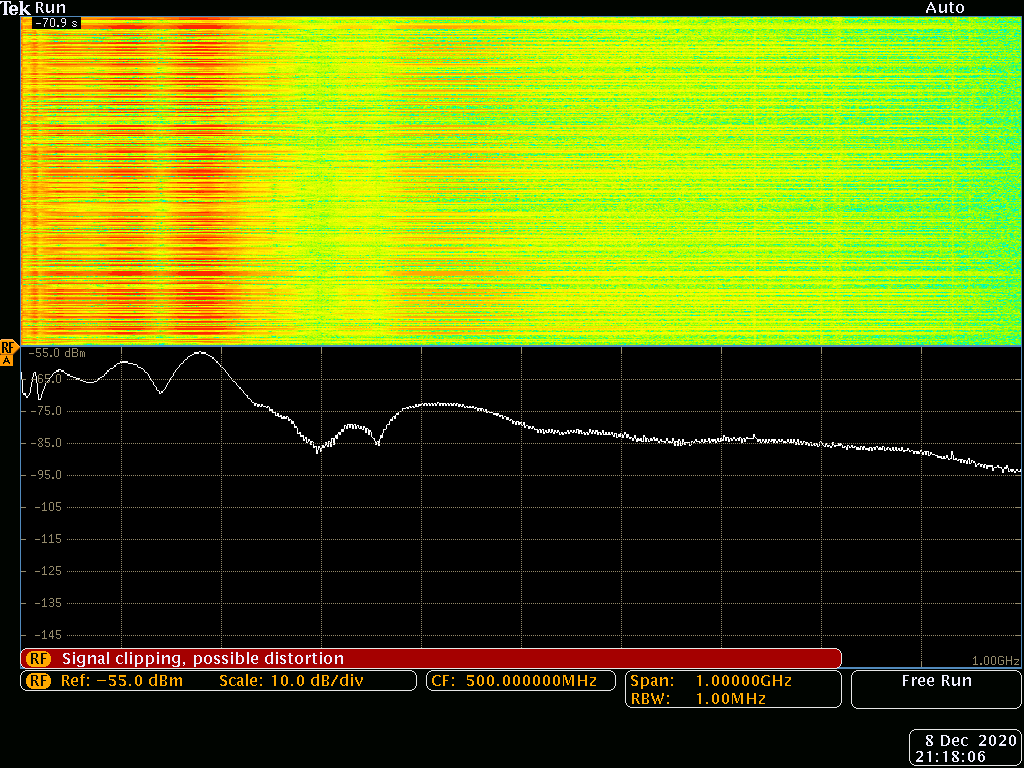 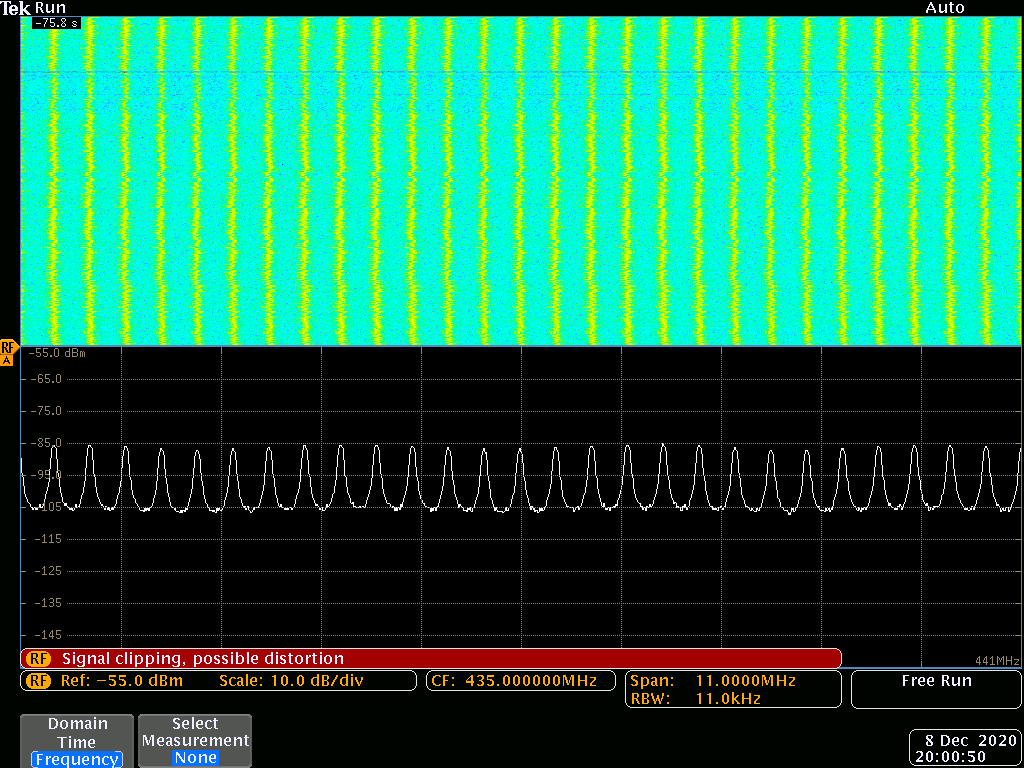 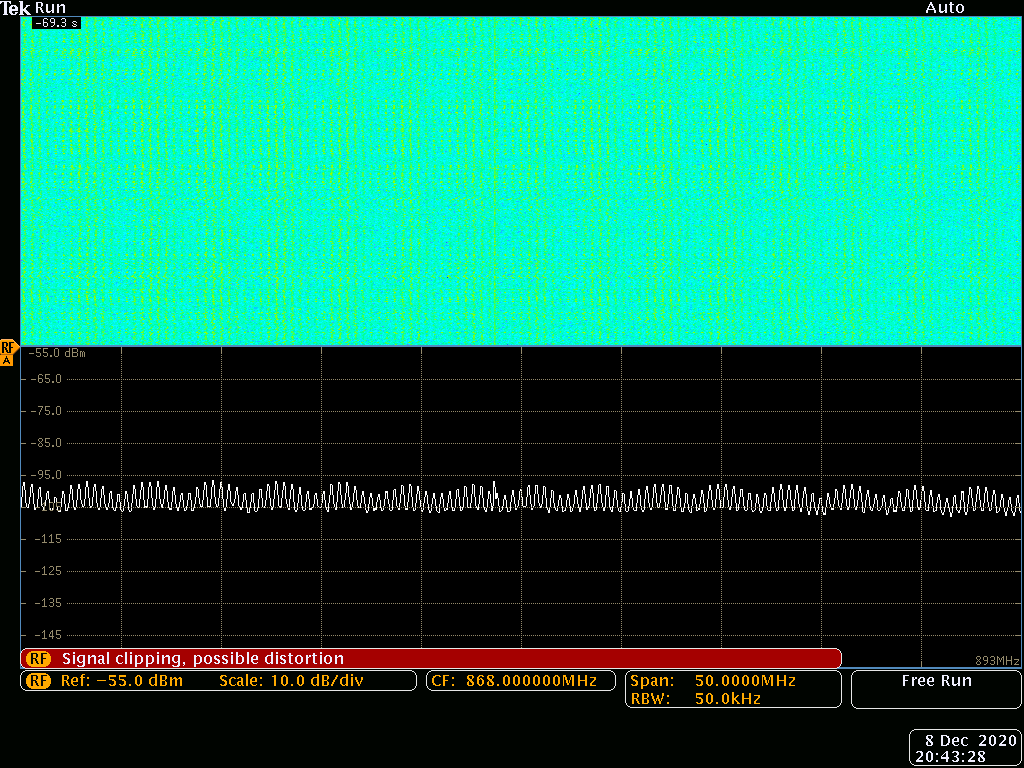 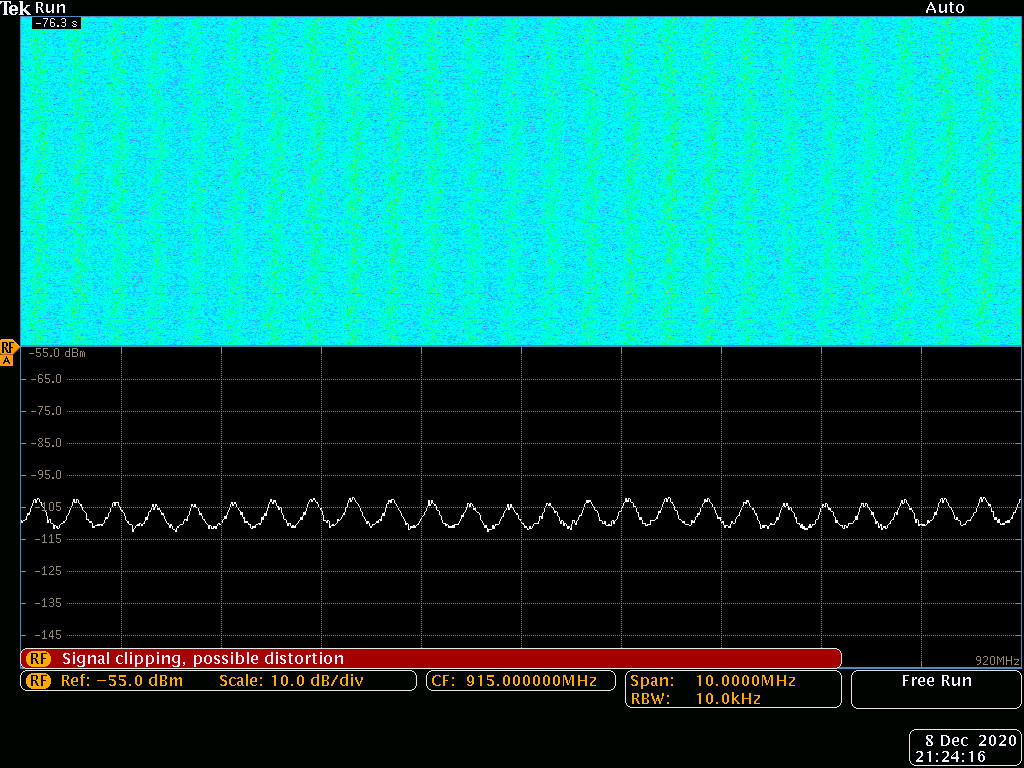 The Power Module PM02 V3 with its DC/DC converter does emit some noise, as you can see in the screenshots above. 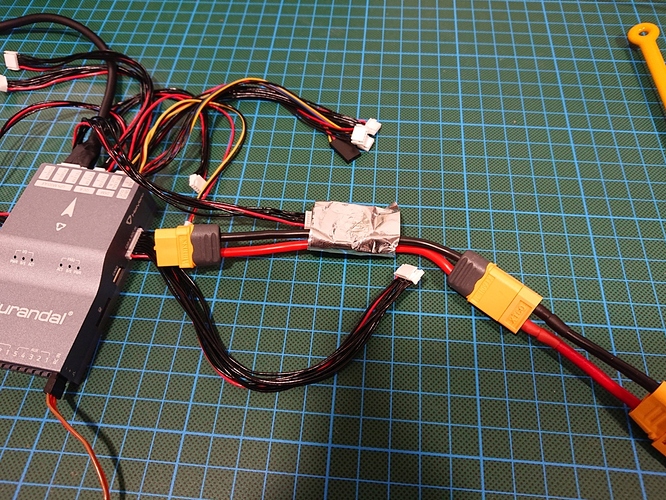 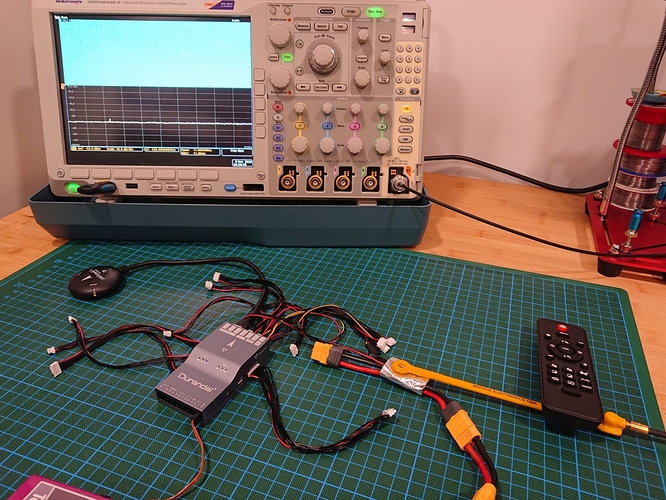 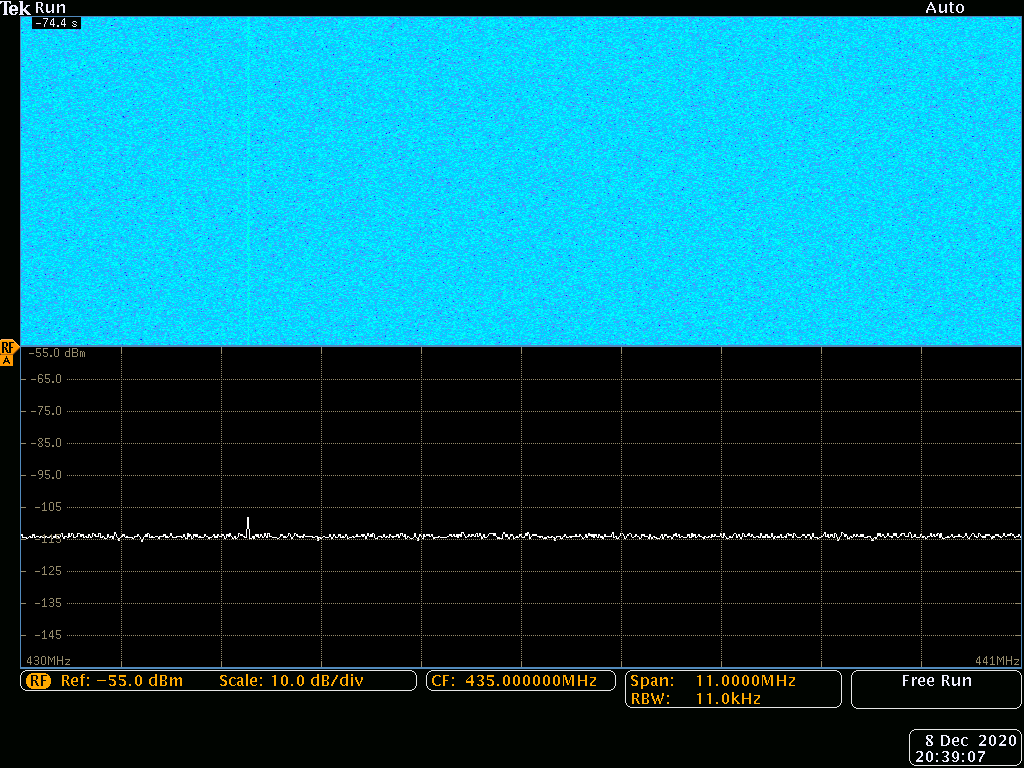 If someone from Holybro reads this, considering wrapping the power module in a shielding tape in the factory for the next gen. power module, would be IMHO a good idea to limit the DC/DC converter noise.

In summary, I concluded from my EMI measurements that Durandal, due to it’s super low noise emissions, is going to be my flight controller choice to be used with Dragon Link LRS.

Did you connect the shielding tape to Bat- or is it floating?

Can you help me on connect the 2nd GPS to my Durandal FC ???

I am having a problem detecting my 1st GPS which is holy bro m8n.

Only Switch is working and No GPS and No compass working.

GPS is OK as I have checked the GPS on another Flight Controller. 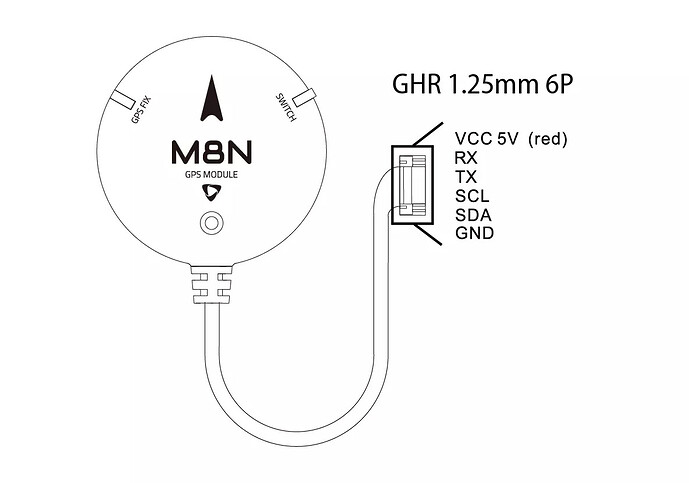 The first GPS should work out of the box with ArduPilot and Holybro Pixhawk 4 M8N GPS, if not, just reset your settings to default and try again.

Thanks a lot.
Solved my problem

Request for help with Durandal FC.

I have a Durandal and I want to enter DFU mode.However I can find no reference in the FC documentation or online and Holybro have not responded to my email on this subject.

The Durandal is working ok and flying a large multirotor with no issues for 12 months. I can connect to Mission Planner running in windows via USB to change Ardupilot parameters, download logs etc.

However I’m not able to update to the latest firmware using MP or QGC as the PC is unable to find the com port when attempting this.

So I thought that if I can enter DFU then I could possibly use STM32CubeProgrammer to flash 2MByte_allzero.bin and/or the latest ardupilot firmware.

Many thanks for any assistance.

Your upgrade issue is likely related to some other problem though.

Otherwise, Holybro Durandal flight controller has two microcontrollers - main STM32H743 microcontroller and STM32F100 I/O microcontroller.
If you open the case, then on the bottom of the big PCB you can find DFU button for the H743. Alternatively, use SWD programmer, such as ST-Link or Segger J-Link via externally accessible Debug header (SWCLK and SWDIO) to flash or in-circuit-debug the main microcontroller. No need to press DFU button with SWD.

The SWD debug header for the I/O microcontroller is also available, but you need to open the case and solder in a socket or a cable. There is no DFU button for STM32F100.