Very new to the hobby. First time building a drone, I built a Hex running a pixhawk4 mini. Last year I was unable to configure the mini with arducopter. One verson didnt recognise the transmitter and another version wouldn’t allow compass calibration. Eventually I gave up and flashed a px4 stack and configured through qgroundcontrol. The craft was almost unflyable, it pitched and rolled about violently, after days of PID tuning it was almost controlable but still really twitchy to fly. So the craft did fly several times.

I have wanted to include telemetary so when the new 4.0 ardu stack came out I immediatly flashed that to see if the configuration problem had gone away. Happy to say the 4.0 stack flashed easily through qgroundcontrol (Did not try through mission planner in the past that has not worked).

After configuration a short first flight made me land and seek out how to decrease the throttle and alter the hover point. The auto hover point from flight in alt. hold prompted me to configure modes to stabalise and alt hold. After flying in alt hold it appeared the hover throttle point had moved and it was closer to mid point on controller. Battery beeper activated and I statred to very slowly fly craft back towards me when it violently flipped and crashed. I assumed a low battery problem but checks suggest the buzzer activated correctly and there was plenty of power to fly it back.

Replaced damaged bits and decied I would try an auto tune immediatly to get it as stable as possible.

Launched in Loiter and switched to auto tune (auto tune as mode). After 5 minutes of tuning the craft dropped. All motors had stopped and it just fell down.

Restarted to see if things were still going and everything appeared fine. Launched and hovered in loiter about a foot off the ground. After a couple of minutes its suddenly flipped over very aggressivly. As if one side had shut down and the other was full throttle.

Does the community have suggestions where to go from here? I dont have logs but that will be my next learning. I cannot rebuild it now so further testings is a long way off.

Does anyone else use the 4 mini and been having issues getting a hex flying? Or could someone make a suggestion on which fligh controller is better?

I do fly a Ph4 Mini sometimes. It’s a disposable quad with two sets of wiring, that either hard-mounts a Cube with its Here GPS, or mounts the 4 Mini with the Holybro GPS on a set of rubber dampers, and flies well with both.
I’ve yet to experience a sudden power-loss-like event, so maybe the culprit is elsewhere. Do you employ any kind of LiPo monitoring system ? I’ve never used whatever Holybro packs into the Pixhawk 4s for power-sensing, but they are useful nonetheless.
And further description of LiPo type and cappacity, ESC model, motor size and propellers involved would help diagnosing your malfunctions.
Oh, and logs. We’re in the dark without logs :).

On my big hex with the pixhawk cube black i use the craft and theory flight deck for battery info etc. I have been unable to get that working on my small hex (hence my desire to run the ardu stack). I got a battery buzzer that plugs into the battery balance ports (cheap thing) just to get it in the air.
Running a 6000 mah 6s HBR 50C battery. It has always been really good on my big hex, discharge has been very balanced and I have never had an issue with it.
ESC’s emax Simon series 60A (originally brought for a bigger motor)
Brotherhobby 2812 900kv motors
F550 frame (cheap banggood big heavy plastic arms thing)
1045*4.5 3 blade props

I think I might throw away the idea of a hex. You sound like the Mini4 works on a Quad.
I would just be curious if anyone else has had issues with the hex configuration. This 4 mini has been nothing but a nightmare

I think i have a log. Please if someone could look at it and tell me if there looks like a crash occured.https://drive.google.com/open?id=1eP4fvWdeAmrb1kuZWYsjKA72jwrXBxCt

Nothing obvious in the logs to me other than the copter seems massively overpowered. Hover throttle of 0.06 seems crazy.

I think this log is the one before breaking the hex. During this it was doing and auto tune and motors all seem to shut down and the craft fell directly down.
The previous log it flipped over. Is that kind of thing not apparent in that log?

And yes the craft is way over powered. Been trying to make something to lift out fishing lines. I think I got a bit carried away on the idea of lift. The throttle hover was set by Mission Planner just prior to the first crash. I suspect that it is a result of this auto tuning/auto throttle setting that something has trigered the crash

95% sure this is the log of the crash after it was flying in alt hold mode and it was doing the auto hover throttle change. This crash was the first crash in a series of 3. I feel that the auto tune hover throttle changes that happen during this flight is the beggining of the problems. Prior to this flight it had only been flown in Acro and stabalize. For this flight is changed modes to Stabalize/ Alt Hold and RTL.
After this crash I decied to do the full auto tune

This combination is going to suffer from motors overheating regardless of load (like fishing lines). consider trying a 4s battery with your 2812 900kv motors or ~500kv motors on your 6s.

Yeah the 6s was never planned, but my bigger hex runs 6s so i built something to avoid extra battries. What I find odd is the fact the craft flew many times with the px4 stack but after the 4.0 ardu stack it crashed after the first flight when mission planner altered the hover throttle setting. The flight after that also resulted in a crash.

I have a Holybro mini here at home in a box. I also have a new hex coming in Feb 3rd. I can try it out before I install my cube to see if I can replicate your results.

I will let you know what I find out

I’ve had a short look at the logs:

2020-01-24 16-01-58.bin is about 1.5minutes and shows a crash while in RTL mode probably caused by a motor failure. I’d guess that motor 2 (left), 3 (front left) and/or 5 (front) fail. Motor number to mapping is here on the wiki. I think it’s a motor failure because it shows the classic signs of this which is the output sent to these motors goes to full but the vehicle still leans towards those motors. What doesn’t quite fit with this is that the vehicle momentarily recovers and then actually leans the otherway… and then it’s the other motors that go to full… so it’s possible that the batteries lost voltage but in any case it appears to be some kind of mechanical or power issue.

2020-01-25 19-27-58.bin is about 3 minutes and shows the vehicle in AutoTune and ends suddenly which indicates either a sudden power failure or an autopilot lockup. If you’ve got the log immediately after this one it should indicate whether a “watchdog” was involved (i.e. autopilot lockup). I’d also re-check how the vehicle is being powered. For example, is a power module being used or is it being powered from the ESCs with power provided through the back of the vehicle (a bad idea).

By the way, if you want to view the logfile, I normally use Mission Planner but there are various log analysis tools including https://plot.dron.ee

Nothing in the logs indicating a watchdog issue:

2812 900kV is a Phantom-1 standard motor. It’s supposed to be used with a 4S LiPo and a 9x4.3 two-blade prop. And they are driven with 6S while mounting a 1045 triple-blade using old 8-bit ESCs running SimonK’s firmware.

If I’d want my motors to desync with zero chance to recovery, always, this is the path: overprop and use an old 8-bit ESC. The overvoltage is an added bonus

thanks Cornel? Thats the best response do far. I am totally pulling this thing apart. This support forum has been outstanding. Everyone here has been amazing. Thanks

One of the other issues with the PH4 is that you can not use the RC in port for a receiver. You must use the PPM input based on this article…

RC input is configured on the port marked PPM. This connector supports all RC protocols (including SBUS, DSM, ST24, SRXL and PPM). The RCIN port is not used for RC input .

And based on that article, this is the proper way to connect a receiver to the PH4 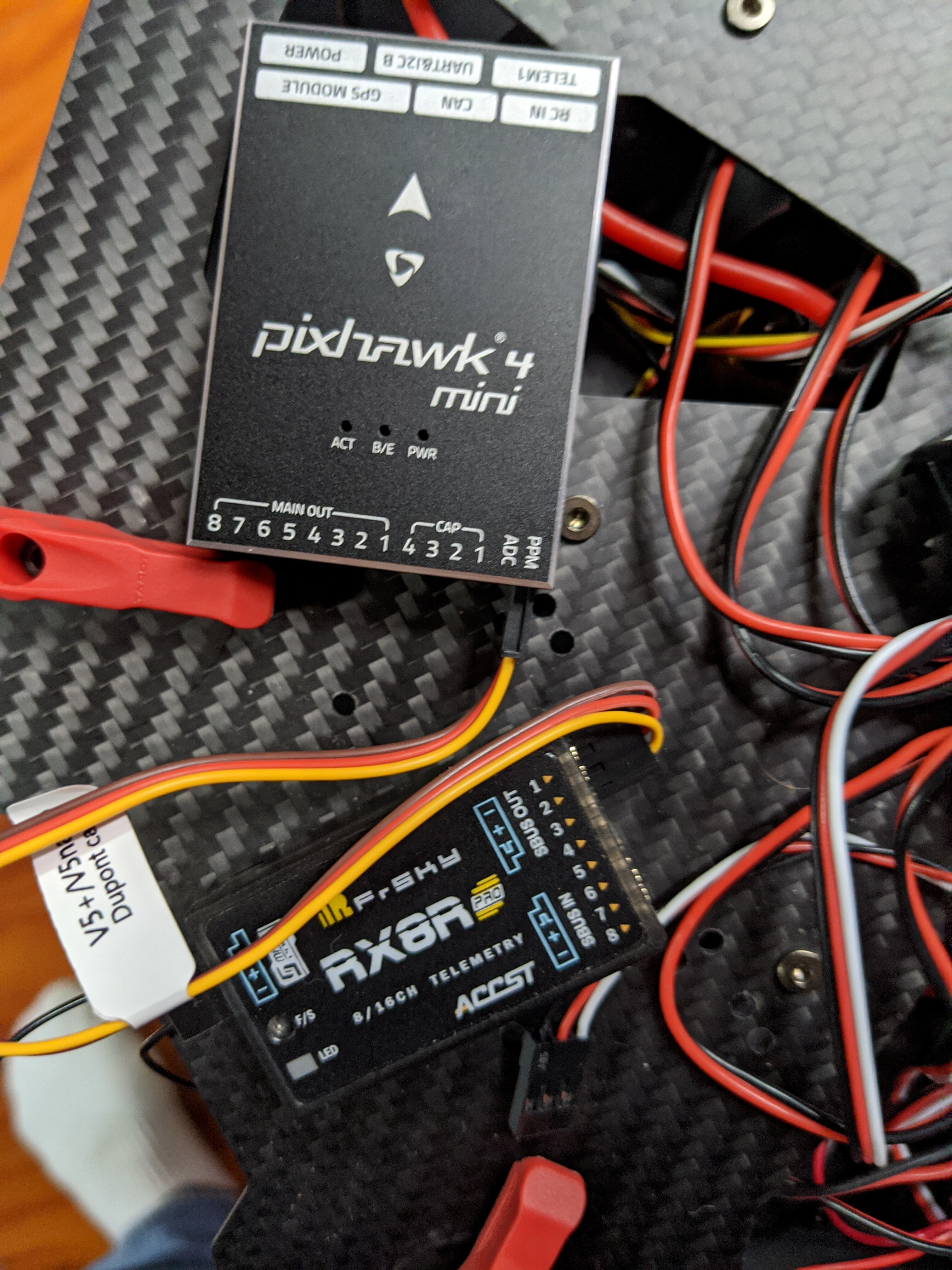 Lol,you could lift a chair with that thing!! you have created a frankenstein copter !! well done

My XSR is wired SBUS to the 5-pin JST-GH and it works.

Thanks Cornel. Is there any chance you could share a photo? I am really new to this and rather ignorant. Every post in here has been a great help