Hi everyone! I’m working on a hexacopter design for rescue/emergency support missions, so would need the model to be able to fly during windy conditions.

I flew a simple auto mission, during a windy day (~20 mph). It was able to follow waypoints and did not crash. However, the flight was wobbly and at time erratic, during which I forced the copter to land.

My question is: is there anything apparent in the logs that can point to improvements from tuning?

I have already done an auto-tune. Also, as I’m rather new to Ardupilot/Missionplanner, I’m still learning how to interpret the logs. From reading posts on similar issues, seems auto-tune should be helpful, but it would be great if someone more experienced has some insight.

Vibrations are a problem that you will have to improve. Please try to fix the Z axis vibrations before flying more or you risk a fly-away. See text below… 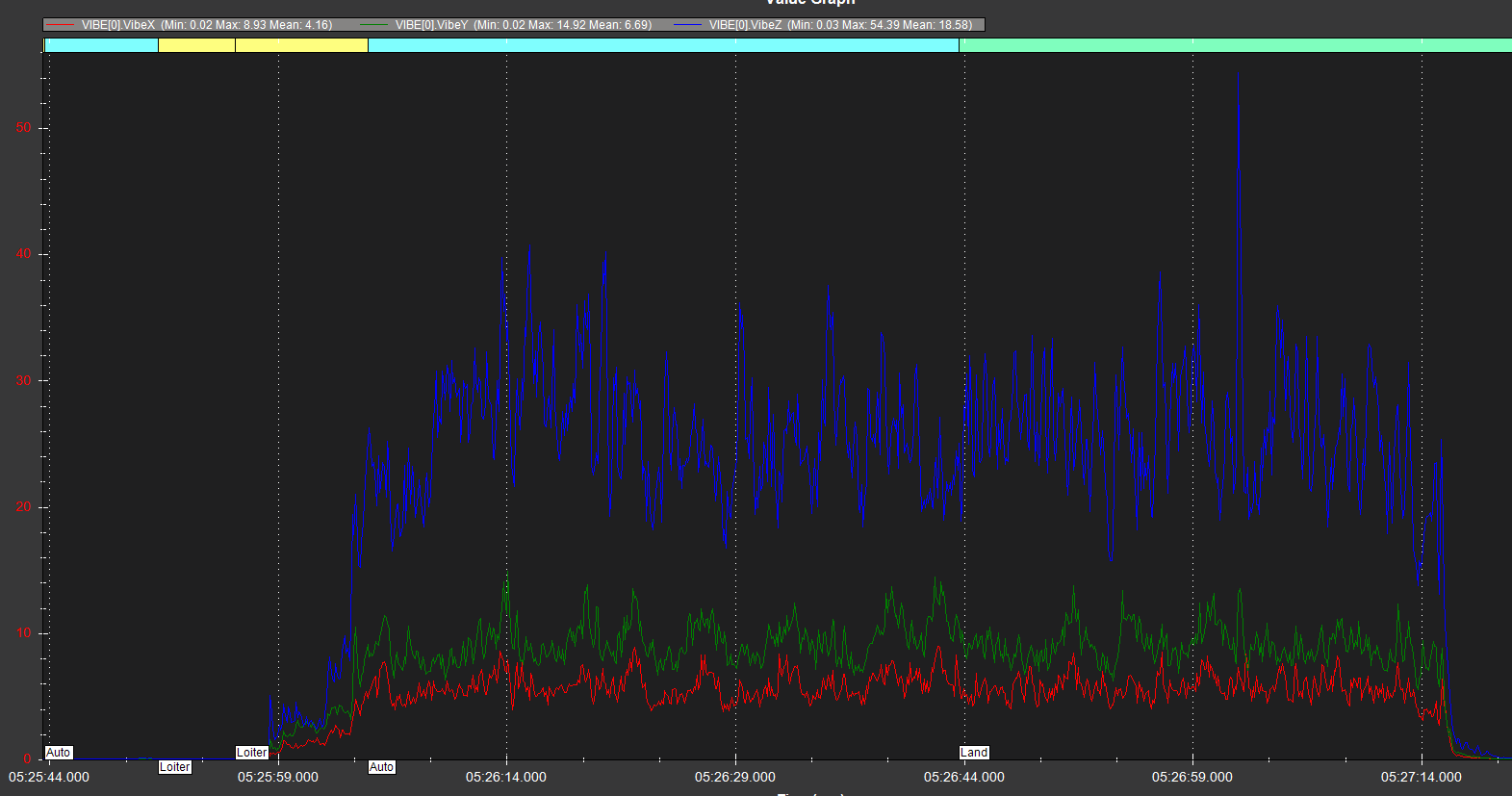 Some of the instability is because your motors are going to minimum, which means you could add a dummy payload and also reduce MOT_SPIN_MIN to about 0.13
Mostly motors 2, 4 and 5 are doing this, the counter-clockwise motors. This indicates there’s a problem with frame twist causing a physical yaw bias, or sometimes very cheap props are not “equal” between CCW and CW spin. We will know more from the next test flights 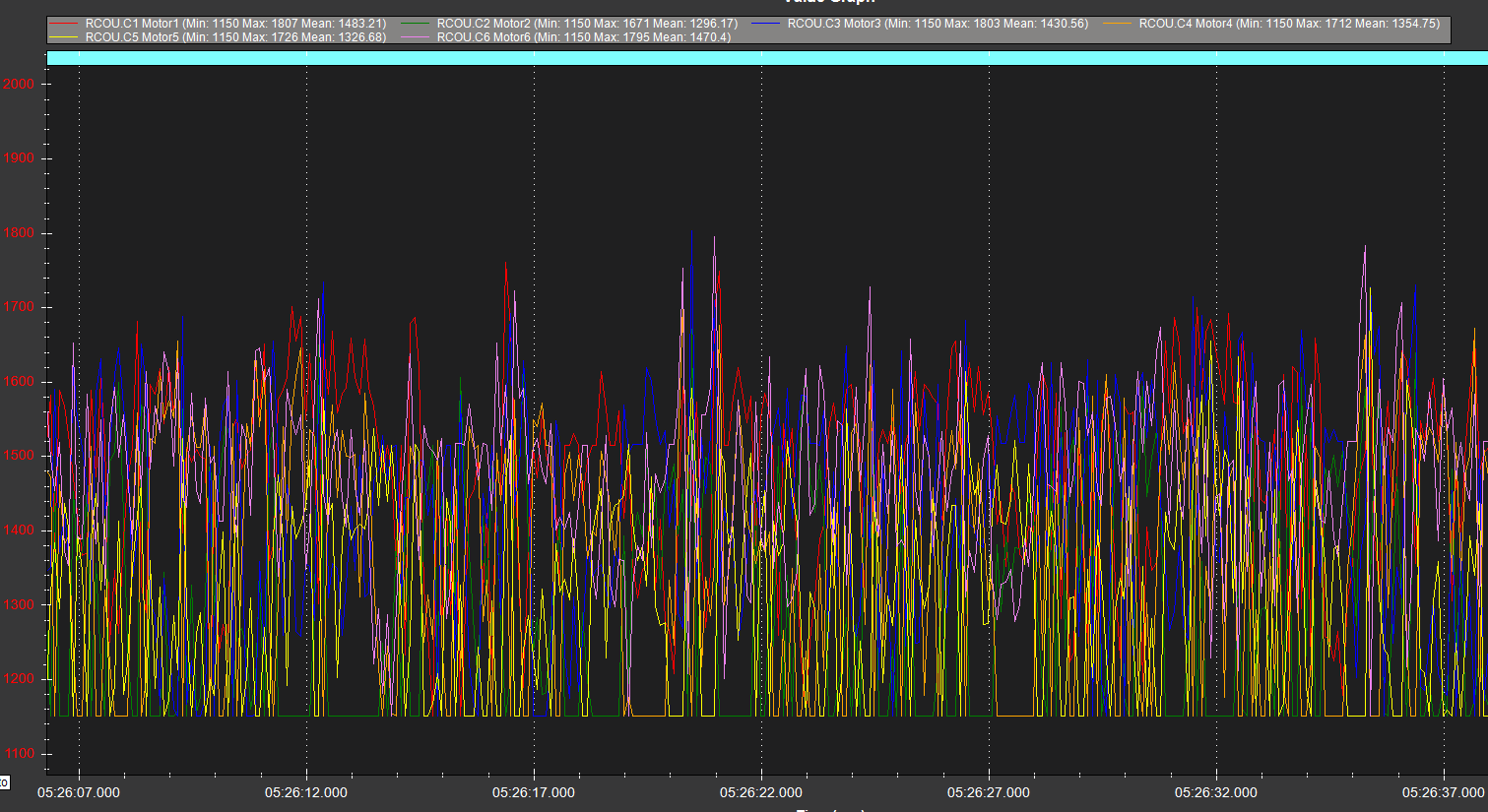 Use firmware “Pixhawk1” instead of FMUv3, just to be correct.
An issue you should be aware of too - the flight controller is only showing one IMU instead of two. This is likely because it’s a cheap knock-off with missing parts or even “factory seconds” parts that didnt pass tests. It’s typical if you dont buy your flight controller from a reputable source.
Your Pixhawk may work OK like this forever, or fail the very next flight - there’s no telling, but certainly risk is increased.

The battery voltage measurements seems to be a bit strange, I could not easily tell what battery type you’ve got and if the failsafe values are correct. What chemistry and cell-count is it?
You might need to do some accurate manual calbibration of the voltage sensor.

Set this
INS_ACCEL_FILTER,10
you didnt make a mistake here, it should be the new default value, there’s been quite a discussion.

Set this to gather data for the Harmonic Notch Filter
INS_LOG_BAT_MASK,1
INS_HNTCH_ENABLE,1

When you’ve improved vibrations just do a hover test for a while and some gentle movements and let’s see that log file.

Vibrations
Make sure there is nothing rubbing against or pulling on the Flight Controller. Everything should be secured.
Wiring should be secured enough so that it does not vibrate around in the propwash, but should have some amount of free movement where it connects to the FC.
Z axis vibrations can be propwash hitting on the FC, so maybe it needs a cover. Or you need smaller props (or longer arms) so they dont over-fly the centre of the frame.

If you find that your flight controller is performing badly, it could be down to excessive vibration. This anti-vibration mount suits the APM, DJI Naza, KK & MWC.

and ones you can 3D print

Anti vibration mount for the Pixhawk flight controller available from 3D Robotics. Edit: Thanks to Radiocontronics, I've added a new version of the bottom plate with 52mm x 52mm spacing to suit the Tarot T810.

Set this
INS_ACCEL_FILTER,10
you didnt make a mistake here, it should be the new default value, there’s been quite a discussion.

This value should be the “right” for the 4.3 version only? Or this is recommended backwards also (like 4.2 FW version)?

Yes backwards, you should be able to use it on any recent versions, I would say even to 3.6

Ok, thanks for the information @xfacta !

@xfacta, thanks so much for the detailed reply! I will try this ASAP, and come back shortly. Much appreciated!

Happy Thanksgiving to those celebrating!

@xfacta, I went through the steps you outlined - it made a huge difference. I flew the same Auto mission as previously, although on a less windy day.

I definitely owe you a beer!

Ok that flight is better. Have you got a photo of the frame and all? I ask mostly so we can see how the arms and motors mount.

There’s still some sort of physical yaw bias going on → motors 1,3 and 6 (clockwise) are working a bit harder to counteract motors 2,4,5 (CCW). See of there’s anything you can do to find and fix twisted arms or motor mounts, get all the prop tips perfectly aligned with each other.
Also try the semi-auto ESC calibration to see if that helps
https://ardupilot.org/copter/docs/esc-calibration.html#semi-automatic-esc-by-esc-calibration

Attitude control is still a bit fuzzy and can be better.
Start by setting these for the Harmonic Notch Filter
INS_HNTCH_FREQ,70
INS_HNTCH_REF,0.125
INS_HNTCH_FM_RAT,0.7

I think the spread of frequencies in this graph will get more focused once the motor imbalance is sorted out, and we can fine-tune the harmonic notch filter 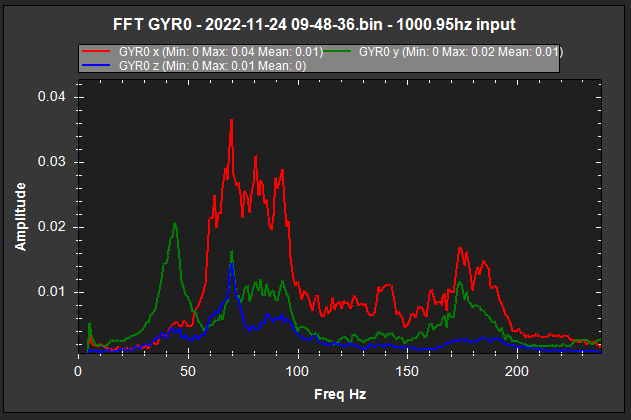 I would definitely set
BATT_FS_CRT_ACT,1
BATT_FS_LOW_ACT,2
and if they are triggering when you think they shouldn’t DONT disable them → then check your voltage calibration and BATT_LOW_VOLT , BATT_CRT_VOLT

If you can sort out the frame twist and even out the motor load, just do a hover test with a few gently movements, rather than a mission or aerobatics - let’s see that log next to fine tune a few things then Autotune would be a good next step.

Thanks again! I followed the steps you mentioned - I think the issue might be the misalignment of the frame. This is likely caused by prior damage from a hard landing that resulted in one of the bottom arm mounts to be break: 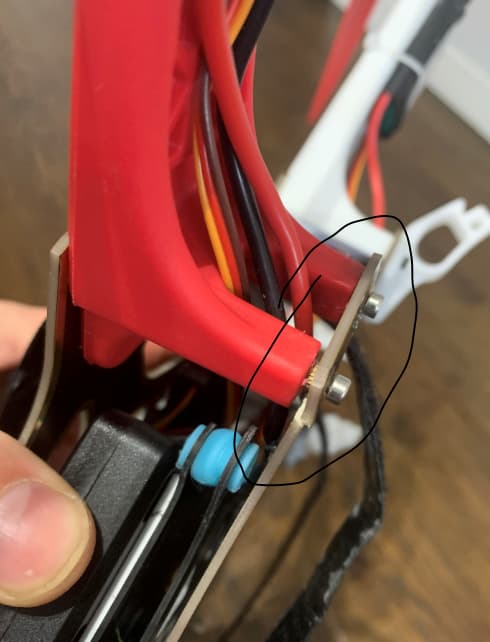 …and using the “align prop tips” method, I see that it’s causing the arm to be uneven with other arms:

At this point, I ordered a new S550 frame and will re-build the drone on it. I think this should help fix a number of issues from prior crashes - lessons learned