Hexacopter crash after a prop break in flight

I had a crash with my hexacopter with pixhawk 3.3.2 firmware

I had a perfect flight until i loose my front left prop as you can see at the video.
After the prop break from the hub the copter still hold it possition and stability

I dident understand why the copter had a full front yaw when i was watching it from the ground amd then i made a pitch to bring it close to me.
The copter behave normally even with 5 props until i made a yaw move , and then it started rotating by it self and loosing altitude. 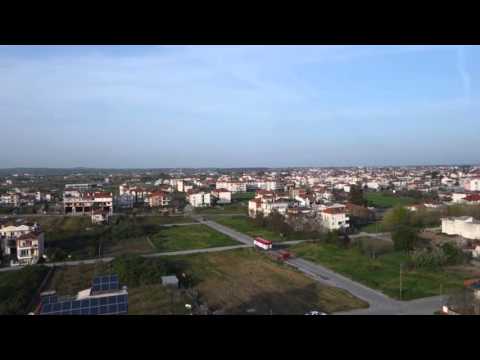 Can you please get us the Datalog? We’ll need that to analyze this properly. I expect there will be some interesting info.

Could you or someone else give me some awnsers about if icould have landed safely??

What should i do to this situation??

I’d say that was a pretty safe landing! Could have been much much worse.

Look at 0:48 at left down of the screen how the prop go off

For what it’s worth I had an eerily similar crash with 3.2.1 last year. Forgot all about it until seeing this thread… No complaints here, but I thought I’d pass it along in case it can be of help.

A bad motor mount broke mid-flight, I instinctually dropped the throttle, then went back to full, but it didn’t fully recover and spun to the ground in a few seconds. I only broke one arm and a landing leg as it didn’t drop out of the sky.

That particular copter had a 2.5 : 1 thrust/weight ratio, so there should have been plenty of power to recover if it was supposed to.

I don’t have video of the crash, but you can see a video of the issue that eventually caused it here:
http://www.rcgroups.com/forums/showthread.php?t=2476601

The root problem with the copter was “vibration isolating” motor mounts that would resonate at a certain throttle range… amplified by carbon tubes that were too long and thin flexing under the load. The motors were fine, I went on to use them in another build that worked flawlessly.

I dont know what i have done but there is no ome log at my pixhawk ,i upload 2 files from my telemetry logs if they can help

Can anybody tell me what should i do so my microsd save all the logs???

Did you find something from my logs???

My thought is to – avoid - the prop failure itself.

Started into multirotors, with the plastic $1-$2 props. After two failures (like yours) and a thirt failure with a bird sucked into the prop.

I decided the root issue is the plastic props. Since then (on my two Quads & two Hexes) I’ve ONLY used the $4 carbon-fiber props. (BTW: be sure to balance them. No a single prop (plastic or carbon) has come balanced properly.)

Since then, even with hard crashes (from learning manual flips), the Carbon Fiber props have outlasted many, MANY of the cheap plastic ones.

BTW: The stiff/ridged carbon fiber props give the aircraft a very “crisp” flight feel. (Since they don’t flex as they spin.)

I think, and I can’t speak directly for OP, but the question here seems to be whether ArdoCopter is supposed to be able to recover well from a broken prop/failed motor/failed esc/etc. I know there has been some banter back and forth over the years with some folks with empirical evidence that it might at least be possible, but it’s not entirely clear what the expected outcome is in terms of whether there is actually code to handle such a scenario… e.g. can it detect the failed rotor and convert it to a quad.

There is some discussion here that would suggest that there is not yet any code, although one may get lucky (perhaps explaining the empirical evidence) if they don’t need yaw control: https://github.com/ArduPilot/ardupilot/issues/838 … perhaps again explaining why cookmangr and myself experience mild crashes after a rotor failure, since we both engaged yaw.

… but it might be helpful if someone with real knowledge could indicate either way.

I experienced some Props or Motor failure with my Multirotors.

Y6: One prop broke in flight (low quality prop-high speed flight). No way to get back home but I managed to land safely…

Octo QuadX: One motor quit in flight (loose plug), No rotation, no altitude loss, I managed to see the non rotating propeller, so I piloted to a safe manual landing.

IMHO: you need power to maintain flight and yaw control. I your MultiCopter is underpowered (need more than 65% power to hover), one motor or prop failure could be difficult to manage (Yaw).

So what should we do when we have a prop/motor/esc failure in a hexacopter with enough power to keep the altitude like mine???

With a hex either you need enough piloting skills to bring it back without any yaw input, or use one of the simple modes on a switch. With only 5 motors it’s pretty dicey already without trying to yaw or horse it around. If possible, just come strait down and let it spin all it wants. As for X8’s, there’s really nothing to worry too much about as long as the power is sufficient. Last week I had a plume of smoke coming from my X8, esc 8 stared on fire. Couldn’t even tell something was wrong. Scared me pretty good though, I thought the battery was on fire…a 6s22,000 battery lol!

So no YAW if you know that a prop/esc has problem.

I have put a flight mode alt hold with simple mode

As somebody else discuss with me if i made full pitch or full roll the copter will drive this way and keep altitude and stabillity.

I hope my tlogs help the developers to find a way for safer flights.

HAPPY AND SAFE FLIGHTS TO EVERYBODY