Hex tips over on launch. Desired pitch not zero?

Hi guys! I’ve just rebuilt my hex onto a new Tarot FY690S frame and put the latest (supported) firmware (3.2.1) onto my APM2.5.2. It seems to want to take off at a very steep pitch angle, and tips over backwards before lift off.
Holding it above my head and giving it some throttle, you can feel the control loop is working correctly (thrusting the correct motors to try and level out), so the FC orientation and motor wiring order/directions seem correct. It just thinks that level is 20-30 degrees tilted backwards!
The FC is mounted flat on the base, I’ve done the accelerometer calibration & level. The artificial horizon in mission planner reports that the hex is level when placed on a flat surface correctly.

Looking at the logs, as soon as the copter is armed, ATT.DesPitch (desired pitch) seems to just jump up to 22 and stay there.

Any ideas what could be causing this?

I’ve attached a log file. Note that I was holding the copter for this and not in “real” flight.

I take it that’s a Mode 1 arrangement of the axes ? I thought I saw a problem but a right hand throttle would take care of that.Sorry.

Reverse Elevator in the radio…

And put the APM on a Damper Mount

Thanks for the replies. I’m using a Turnigy 9X in mode 2 (running er9x). The sticks seem to control the correct channels when looking at the “radio calibration” tab of mission planner.

I’ve tried reversing the elevator channel on the radio and re-testing again with the props off, but the APM is still calling for a DesPitch of 22. I’m interested to know why you thought this might be an issue (something in the log?), because I was under the impression it would just swap positive for negative on that channel, rather than a shift of the centre point like I’m seeing.

Moving the elevator back/forth, then the aileron left/right, you can see that the DesPitch value just seems to be offset from zero (and seemingly half the magnitude of DesRoll). DesRoll itself looks ok. 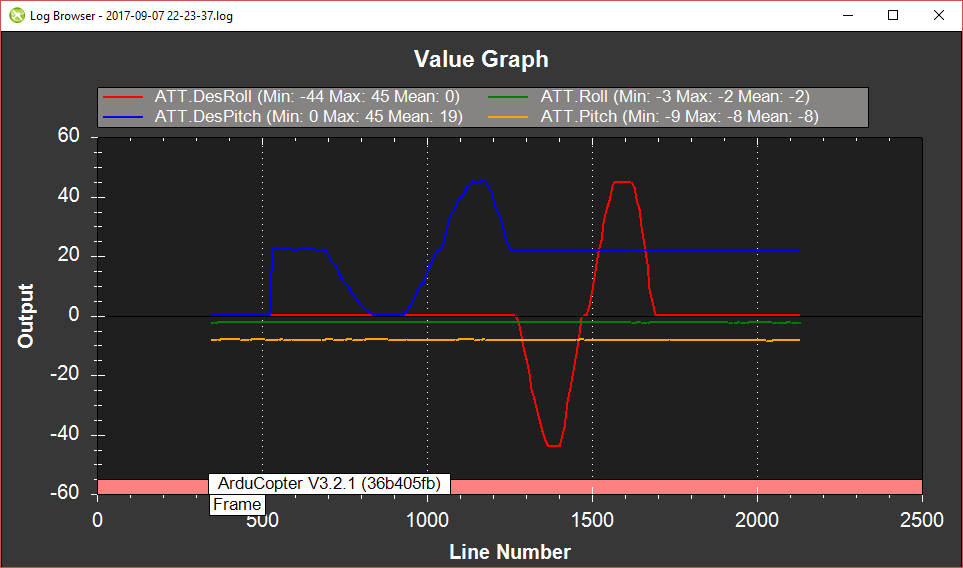 I am actually using that damper mount already! I probably have some work to do in preventing vibration coupling through to the FC via the ESC wiring and checking prop balancing etc.

You must have either a lot of trim set (22 degrees) on one of the gimbals or a dodgy gimbal.Make sure they are centred and recalibraate may sort it out.It looks like you only get half the movement with that stick over the roll stick so it could be the gimbal.

Hey guys,
So I think I got to the bottom of my issue, but I’d like to know what caused it. You were onto something with trim, but it was in the APM radio calibration rather than on the transmitter!

So below is a screenshot of me carrying out a RC calibration. Min/max throws of the sticks look pretty normal, all about the same. However when you dive into the RC1-RC4 parameters, the RC2_TRIM value is considerably different to the others. Manually writing this to 1480 gets the hex working nicely, takes off, holds position in the air well, and no tipping over! 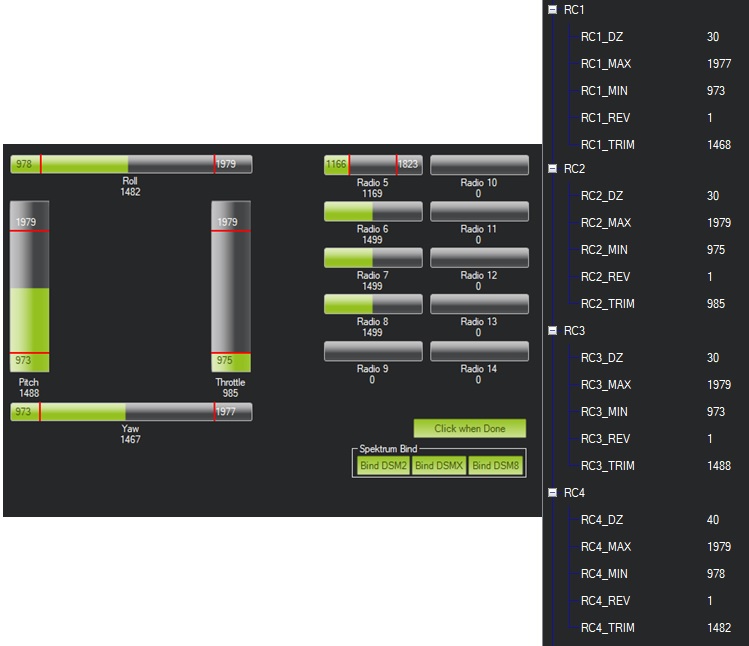 Running the RC calibration again sets it back to the ~980 region though. How exactly is this trim value derived in the calibration process?

Cheers for the help
Chris

RCx_TRIM is supposed to be mid-stick, so I’d start looking at the radio…

…except for on the throttle where it is set as ~ minimum.

As noted above did you realize that all the sticks move in the display as the radio EXCEPT pitch which is backward. So when you calibrate pitch and move the stick “forward” the green display should go DOWN.