Hi!
I made my first successfull take off today. F550 hexacopter, ublox GPS and Devo7 transmitter. The hexa hoovered like no drone I ever flown before. Marvelous and beautiful! I flew a few meters and then let it self stabilize two-three meters above ground. Then the whole copter tilted and started flying away. I panicked and pushed “hold pos” but nothing happened for two seconds so I increased the panic and pressed “return to home” and two seconds later the whole thing made cartwheels over an old dusty road and collapsed in a heap of parts. (I think everything except two arms and the main board is salvagable)

Can anyone help me with the log files and see what went wrong? The only thing I can decipher is DCM bad heading, and that dissapears after a few seconds. The copter drifting off and then bolting away into the road was (as far as I can tell) in direct opposite of remote commands. 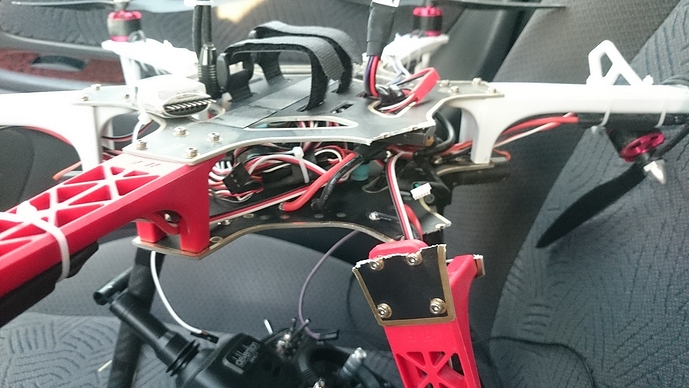 Do you have the log from the Pixhawk itself instead of the tlog? The tlog is fine, but the bin log has more in it. As long as you’ve enabled enough logging in it.

I don’t have pixhawk, I fly APM. How do I get my hands on the bin-log?

After doing this, the log files will be (default) C:\Program Files (x86)\Mission Planner\logs\HEXACOPTER\

EDIT: And by your post, it sounds like maybe one of your motors or ESC failed on you.

Usually if it’s just one, a hexacopter, if not weight overloaded, can handle that and at least land under some control.

I lost one on my Hex last week and it veered hard. I was still able to maintain some control, but it also threw off the yaw so staying oriented was difficult.

It seems likely that something was off with his compass. before I was using my external compass, it would veer off hard occasionally, forcing me to take it back to stabilize. I don’t think the log records mag data by default though so I don’t think we’ll have that to examine sadly. Would be interesting to see at what point did the craft decide to fly off.

As I can remeber (blurry panic-stricken memory though) all props were spinning when it hit the ground. I will try to do a motor test and see how they work tonight.

BigTulsa: The landing it had was very much not under some control

I will export the BIN-files also, if someone can help me troubleshoot the logs.

Awesome! Just throw up the log files when you get a chance and I’ll take a look at them!

I recommend taking a look at the following page in the docs:
http://ardupilot.org/copter/docs/loiter-mode.html

Does #2 under common problems sounds like your symptoms? You should look into compass configuration?

Yes, the info under #2 sounds like my situation although I never used loiter. My transmitter only has stabilize, hold possition and return to launch/land.

But I remember reading something about the GPS and Compass being dodgy. Does the APM2.5 have an internal compass? And where should I input the ublox GPS connectors? It is currently attached like this: http://g02.a.alicdn.com/kf/HTB1yrKSHVXXXXbBXFXXq6xXFXXXI/APM2-6-Arducopter-multicopter-Flight-Control-Board-w-UBLOX-NOE-6M-GPS.jpg but I have heard people talking about this being the WRONG way, and that I should put the cable 12C directly beneath the GPS-text on the case instead.

If my problem is due to compass, can someone please assist in how to fully configure it correct?

I have noticed that a lot of the cables inside the hexa has been either cut, or torn in two, so I have a bit of soldering to do before trying to fly again, but I won’t dare flying again without trying to fix whatever it was that broke it the first time

Haven’t looked at the log files yet, but the APM 2.5 DOES have an internal compass, and if you want to use the external compass (which you should, the internal compass sucks due to all the noise around it, you need to cut a trace on the board. I have the APM 2.8 and it was just a jumper I had to remove. Now as per the port to put it into, on the 2.8 you have to put both on the GPS side.

The easiest way to test if its using the external GPS is to look under Flight Data -> Status -> mx my and mz while you keep the board in the same orientation, but move the GPS by hand. If the values stay within +/- 10 then it’s using the internal GPS, if they change drastically as you move it, it’s the proper GPS.

After that, you need may need to set the orientation to ROLL_180, I have the same GPS and I had to set it to 180 because when it turned right, the GUI showed it rotating left.

You also need to do a compass calibration OUTSIDE away from large buildings and metal objects (like a car) so you don’t get any interference. Then after that, look on the map and see if the copter is pointing the right way as you rotate it.

Sounds like you have a compass issue for sure, but you shouldn’t have had it fly away while in stabilize mode, I’ll check the logs later tonight for you.

And if I have 2.5, the ports should be as in the image above (on each side of the top, not close to eachother)?

If the GUI showed right when turning left, could that be what happened when I tried strafing left but the hexa darted right? Like if the controlls suddenly were mirrored, that might explain a lot of things.

Sounds like you need to set it to ROLL_180 and I would check with wherever you bought the board first for an easy answer, but if that doesn’t specify, if you unplug the GPS the compass should stop working in the info panel.