I swapped a pixhawk1 and a pixhawk2 between planes. The pixhawk 1 went from an A tail to a delta (FX-79) which was flying well before the switch. I loaded copter firmware to reset the PIDs and then reloaded 3.8.2 arduplane. All was set up as I’ve done 20 odd times before with this and other planes but on the first Autotune flight, the plane flew straight nose up from the bungee and then straight nose down. It did not seem to respond to rc input.

All pre-flight checks were fine and there was no damage to the control surfaces so I’m 94.2% sure it was not a physical failure (until it hit the ground).

Would some kind soul take a look at the log and see what I did wrong please?

Well, you launched it in AUTOTUNE mode, that’s just incredibly bad.
Next time, launch in MANUAL, then you may do AUTOTUNE, and by the time you are done, you’ll probably know why this never could end well.
Be kind to your plane next time

Thanks Andre. Now it’s rebuilt, I’ll maiden on Manual. It’s been so long since I flew without FBW that I’ll have to practice on another plane first.

I often do my first takeoff in AUTOTUNE, it has internal protection against tuning before it has reached a good airspeed.

All pre-flight checks were fine and there was no damage to the control surfaces so I’m 94.2% sure it was not a physical failure (until it hit the ground).

I notice your output channel assignments are rather unusual to say the least. You have both channel 1 and channel 8 as flaps, channel 2 as left vtail, channel 3 as throttle, both channel 4 and channel 5 as left elevon and channel 6 as right elevon. For a FX-79 delta-wing that is a very strange setup. Have you added flaps? Do you really have a vtail on it somewhere?
Could you describe what channels are really assigned to the two elevons and throttle? If the assigned functions are really correct then I’d love to see a photo

If you are sure of the channel assignments, then are you also sure the elevons are moving in the right direction? I don’t mean just responding to TX input correctly, I mean if you leave the sticks centered and pitch/roll the plane do the elevons correct in the right direction?
If it is OK, then the other things to look at are the thrust line (is 100% throttle appropriate for takeoff on this model?) and the CoG (is it significantly tail heavy?)
Please also read this guide:
http://ardupilot.org/plane/docs/guide-elevon-plane.html

Thanks for spending the time to analyse. The outer elevons are used as intended but the small inner elevons I’ve been experimenting with as flaps and differential spoilers. The inner servos have just enough cable to reach Main Output 1 and 8 - saves having extensions just for a cm.

The CoG is the same as before I switched the Pixhawks so I don’t think that was a factor. The FX-79 does not normally need 100% throttle but there was a little cross wind so I just wanted it away from the ground asap. I normally auto-take-off to run missions and set the max FBW throttle to 75%. This was going to be a simple autotune maiden.

The P2 was removed from an A tail plane and put into the FX-79. I thought that the parameters were reset because I loaded the latest copter firmware and then loaded arduplane again but it looks like I did not do that properly if the old A tail parameters are still there. I probably tried to maiden with all the PIDs for the A tail. :-/

The FX-79 does not have a tail… yet! We have plans to add an A tail so it can be dropped from a balloon and have better control at high altitudes. I’ve not found a reliable way to mount that tail yet without filling the wings with carbon but then I can’t detach the wings so it will not fit in the car. This photo is potentially how it would look with the tail fitted. Ignore the grey wings 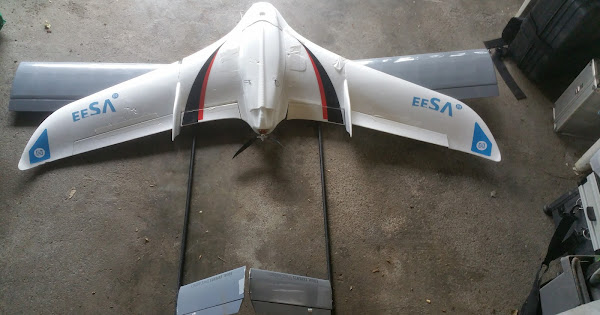 It’s now rebuilt and ready for another maiden on Wednesday

@tridge I did not mean to say it’s impossible to launch in Autotune , but we’ve seen how sluggish elevator can be in the beginning of tuning (one can switch to autotune in level flight, and need to hold full up for several seconds before the plane climb significantly) - so I just would not recommend that at takeoff or with PID that are not known (it was used in another plane)

yes, you’re right that it can be sluggish.
I usually do this for a maiden flight if I want stabilisation

oh, and always have MANUAL available on a switch in case it is needed

FYI - after a re-flash (arducopter then back to arduplane), a Reset Parameters and a setup from scratch, the FX-79 flew great. Thanks for your help.

@tridge When I get round to adding the A tail to the FX-79, I’ll keep you informed so you can laugh at the result.