In the weekend I was trying to perform a camera survey mission (second of the day) with my hex when it suddenly rolled over. I switched it into loiter and then it started tumbling and hit EKF failsafe. I eventually coaxed it close enough to the ground to disarm it and let it fall, but it appeared to be unstable on the yaw axis on the way down. I’ve checked the page on diagnosing problems using logs and can’t find an exact match for my issue. I can see that the desired pitch and roll were going crazy around 03:01 into the log, and the actuals were somewhat following. The only thing of real note is both the onboard and GPS-provided compass readings went totally crazy at that point, but I can’t tell whether that was a result of the tumbling or the cause.

Could someone experienced in diagnosing such things give me some pointers what to look for?

Binlog attached for the curious

everyone loves a good mishap!

Whilst I’m not a specialised in analysing logs, I can tell you the 3rd. motor output suddenly stopped and a huge spike in current flow occurred just prior to it.
Did you check for a burnt out ESC and / or motor? 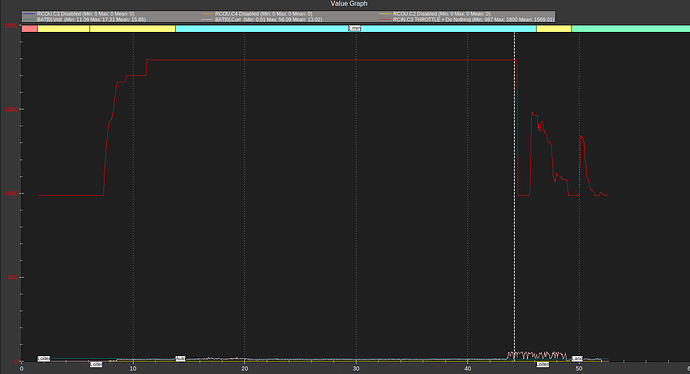 Normally with these you expect to see a motor commanded to maximum thrust since it (or the ESC) has stopped working…
Not this time.
It did that roll, nearly got back under control then did the roll another two times.
Could it have been the camera gimbal going crazy??
Everything I see is because of the loss of control, I cant tell what caused it unfortunately. A real expert will need to take a look.

I notice you’ve loaded FMUv3 firmware. Is this a Pixhawk 2.4.8 style clone? If so it might be worth just replacing that anyway.
The 5volts DC (vcc) is quite low and could potentially be a problem, but in this case there doesnt appear to be a brown-out or any voltage related issue.

Sorry I cant help more at the moment.

EDIT:
Looks to me like motor outputs, particularly since they are dropping at first, not rising, are because of the roll and the flight controller is commanding corrections.

I would use MissionPlanner motor test to run all the motors for long periods as a test before flying a again.

I have a large voltage drop during my flight to WP15.
To get 55A of current, the voltage is down to 12.75V.
This phenomenon has been going on for a long time.
I am detecting an EKF anomaly. 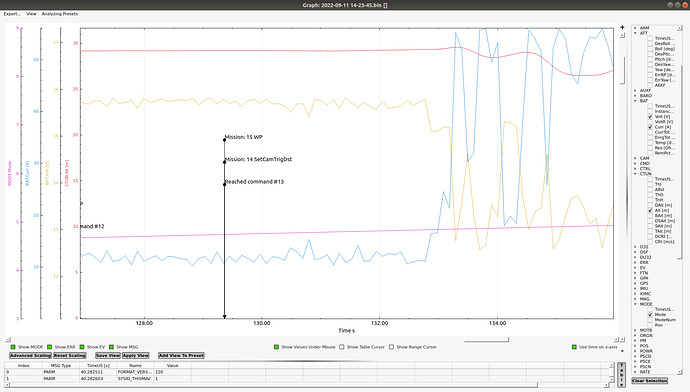 Yes, it’s an old 2.4.8 clone. It’s always given a bit of trouble on the gyro and EKF resets in flight. Maybe time to retire it. I have some spare matek boards floating around…

The motors are all working on the bench with a short test. I’ll put the props back on and do a prolonged low hover maybe to stress the ESCs a bit more, and check the wiring to that motor 3 ESC. My first thought was that one of the ESC signal wires came loose but that didn’t seem to be the case. I’ve had one motor wire come unsoldered from the ESC in flight before and while it caused a momentary blip, things rebalanced on the remaining 5 props and it flew pretty much as usual, so I suspect if it is a motor/ESC fault maybe it was cutting in and out. 2 of the motors have separate ESCs on the arms, the others are on a 4 in 1. Wouldn’t a 6 in 1 ESC be nice!

As for the voltage drop earlier, I think it was flying reasonably fast and the stresses on the battery at the turnaround points in the survey grid caused a bit of sag. On the earlier mission that day I was getting battery 1 alerts at almost every turning point. I don’t have sag compensation enabled. The battery is getting a little old. I don’t often fly auto missions, so it’s possible the stresses of high speed direction changes are a bit more than it’s used to.

Thanks everyone for your thoughts.

Pixhawk1 is the correct firmware for that FC. The fmuvx versions are not correct for any Flight Controller. Not that it will resolve anything.