Hello! Is anyone there? Any Developers? SERVO5 vs MOT_PWM

Servo5_Max and Mot_PWM_Max - how they differ since both control the same and only motor in a single copter, assigned to Servo5 (option 37)?

I asked this question several times but not a single answer to date.
I really need to understand and set these parameters correctly, please…

In my case this controls a throttle servo of a gas engine. MOT_PWM_MAX and MIN do the job but Servo5_MAX and MIN seem not to do anything. Should I disregard Servo5 parameters altogether?

MOT_PWM_MAX and MIN do the job

That is why nobody is answering, you don’t have a problem and this is very precise ardupilot documentation. No one sees why you’d want to know what you are looking for, thus no one is interested.

The reason I need to understand and do it right is that this is a very costly copter. Each crash costs me many thousands of $$ and many months of work. Can’t afford to guess…

Too many crashes already.

The Servo Min Max values can stay at defaults, if you’ve altered them put them back to 1000/2000 and just use the MOT_PWM min and max.
These days only the T-Motor Flame and Alpha ESCs need specific values, just about everything else works with the PWM we give it after the All-At-Once ESC calibration procedure, or DSHOT and calibration doesnt matter.

Why are people buying FLAME ESC’s I wonder? Is the logic “you can’t pay more but you can get better performance”?

Good question, it probably deserves a good answer… (I think the answer is advertising and perception)

Thank you Shawn - I’ll put Servo5 back to 1000/2000 and trim to minimum.
As mentioned earlier this copter has a gasoline engine so Mot_PWM really controls throttle servo, not an ESC.

Another thing that I am uneasy about is flying in the auto mode (AltHold e.t.c.) which is going to be my next test.
This is a heavy copter that hoovers at 80% throttle. The PWM at which throttle lever hits a stop is 1620 so the MOT_PWM_MAX = 1618.
My concern is: in AltHold mode the copter should start taking off after I advance the stick about 20% past mid range of throttle stick on my radio. Controlling of ascend and descending is by moving the stick past or below that mid point on the radio. It is my understanding that the autopilot automatically recalculates the PWM values from my radio into proper PWM output to the throttle servo (Mot_PWM).

I know it’s a silly question, because that is why we calibrate both the radio and set those Mot_PWM min and max values, but having the hoover point so close to max throttle, and Mot_PWM_Max so low scares me.
My electric monocopters fly nicely in auto modes but this underpowered gasoline beast is a different animal altogether. Not mentioning a very long spool up time.

Try to use AltHold and let it learn. You’ll end up using it all the time, and maybe graduate to Loiter one day.

Stabilize Mode is of course the most manual mode (except Acro) and your go-to emergency mode.
There’s been so many stories on here from people asking about “why did my drone crash when I switched to Stabilize?” and of course they had the throttle at minimum, they directed it to fall like a brick.
We’ve taken to using a spring-centered throttle and PILOT_THR_BHV,7
Some are dead against that, but generally these days it makes sense, and you’ll find Stabilize and AltHold will end up both at same centered throttle position after a while.

I fly my electric single-copters in auto only. I’m not a pro. I’ve never flown quad-copters, I designed and built my single copters and that’s the only drones I’ve ever flown. In Stabilize I manage to take off and quickly land before I lose orientation. AltHold and Loiter in the Super-Simple mode, with Land and RTL at my disposal make it possible for me to fly and make them return back safely. Wired, isn’t it?
I just enjoy developing more than flying… Not much time left for buying “the real thing” and learning to fly it.

My 5" electric single copters are too heavy to fly longer than for about a minute or two. The next one will be a 12" which should finally stay in the air for 15 min or so. That should finally let me learn to fly them

But my real goal is to develop a gas powered single-copter that will stay in the air for an hour or longer. The electric copters are just stepping stones for me because they are sooooo simple.
I’m a mechanical engineer - gas engines, transmissions, airplane design… not much programming and electric toys…
Now you understand why auto modes are critical for me. I’m just not good enough to fly drones manually.
After a few crashes I managed to take off and immediately land my gasser in Stabilize. When I did it in Loiter, it took off but after 3 sec of hoover it went hey wire. Went into resonance, nose dived and committed a suicide.
I rebuilt it and half a year later put it back on test rig. Sure enough the PIDs were way too small. I also noticed that there are position PIDs that were way too tight for that size/inertia of a copter. Did not know position PIDs existed.
I’m getting ready to test fly it again, but I’m afraid it may not have enough time to “learn”. How long it takes to complete the learning?
That PILOT_THR_BHV,7 intrigued me. Will have to find out what that is.
I feel like a blind person walking in a forest created by programmers who think that everything they created is soooo obvious to everyone…
Not that I’m oblivious to programming. I know Fortran, Basic, but… I’m still lost in arducopter.

Hi Andrew,
I wasplanning to setup a plane with ardupilot, but as I am a newbie to FC controllers I started with a small hexacopter where you can find much more information on the topic.
So now after almost 2 years of trying and reading a lot on this forum, I feel confident to start with the plane and transform my DO228 from robbe into a UAV. 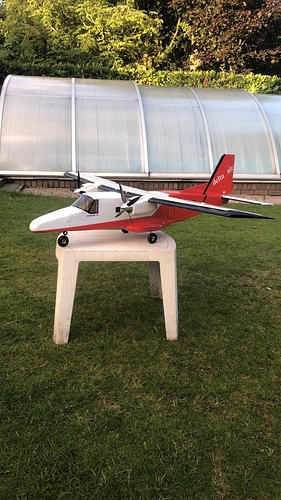 Maybe this approach would also serve you in achieving your goals.

How long it takes to complete the learning?

Not long but you can also hover for a very short time and then get the value from the log. Ctun>Tho then enter it manually for Mot _thst_hover.

I feel your pain Maarten. It’s been 4 years for me. It’s extremely hard to put all this together from thousands of individual pieces not always related to each other. Especially if you don’t have someone experienced around to help you out. In my case each crash let me learn a lot because it made me know what questions to ask.
I’ve been advocating for some time for an Ardupilot/Arducopter on-line Academy. Wouldn’t necessarily have to be free. Should teach you step by step everything about all the features of Ardu and how to use them properly. From novice to advanced.
Forum is a great tool but how many hundreds of questions you need to ask before you are comfortable with the software? Not the most efficient way to learn.