Running 3.4-rc7 on my Y6. Everything flies great, stable, a little drift in pos-hold. Not rock solid, but not bad.

I’m getting errors 24-0 and 24-1 on the logs near the end of the battery. Looking it up, the error is “ERROR_SUBSYSTEM_EKF_PRIMARY”. Anyone give me any ideas on what that means or what I can look for in the logs?

Hi there. So this appears when the EKF “changes lanes”. One of the large changes in AC3.4 vs AC3.3 is that there is one EKF per IMU (so two on a Pixhawk), in AC3.3 there was one EKF that used a blend of the two IMU’s data.

That error means that it switched to the 2nd EKF. It’ll do this if it gets too unhappy with some of the data coming in. When it does this, the vehicle tends to give a little motor spurt as well (something I just noticed and will fix in a future release).

In general it’s not dangerous but it likely means some sensor data was not good. Paul Riseborough is probably the only person currently qualified to say whether it’s a serious problem or not. You could post a dataflash log if you like and I’ll ask if he can have a peek.

Thanks for the report. I’ll update the wiki to let people know about this new error.

Hey thanks, ran into this error again. Flying fine on 13" props, tried upping it to 1555 props and flies stab mode fine but alt-hold and other modes jump in altitude like a baro issue. But i’d appreciate looking at the logs and seeing if I have an IMU issue or something. Not super comfortable with it switching between EKF’s.

Are there any good docs that explain how the EKF’s work with the IMU’s etc? Would like to understand better what i’m looking at

Here’s the link to the logs ( did alot of fast flying and hard banks to test PIDs). Seems pretty stable, at least on 13".

Hi @wifiguru10,
the vibrations are a little high. But that doesn’t seem to be the problem. There are some strange “jumps” in some places - for example the baro temperature and the NKF2.AZbias.

Thanks for the info. So i’m using the old vibration graph, everything seems pretty good on that. What graph/variables are you looking at?

I also look at C1/C3/C5 motor outputs and C2/4/6 outputs (the top motors and bottom motors respectively). If there’s alot of instability i see alot of range in the outputs.

So the Bias, i’m running an authentic AUAV-X2q FC rotated 90degrees. It’s on a rubber isloator and I have baro-foam. Do you think it could be a bad board?

Thanks for the logs. I’ve had a peek and I agree with Thorsten that the vibrations seem ok. I’m sure it’s possible to deduce from the EKF (or NKF) dataflash messages what the cause is but I’m not much of an expert in this area yet.

I do see there’s something going on with the EKF’s consumption of the compass. At least the NKF3.IMX,Y and Z values stop updating and there’s tons of DATA_EKF_YAW_RESET events as well. 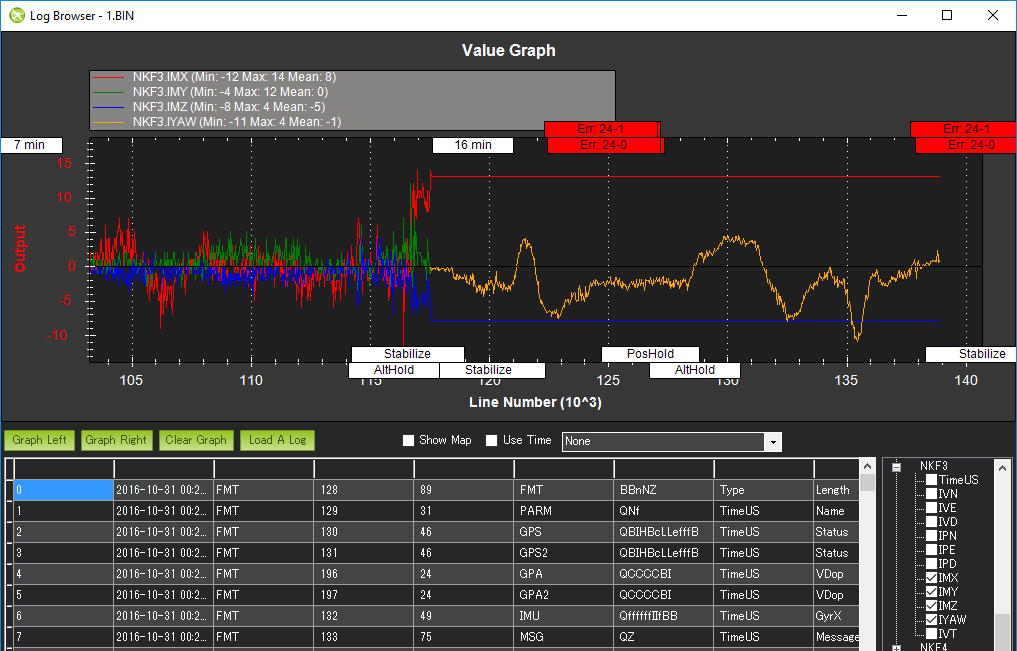 Of course you’re actually flying the vehicle outside at the end of the log when these messages appear right? It looks like it’s very low and it’s not moving around horizontally very much.

I’ve asked Paul if he can have a look.