Hello, after several dozends of flights over the last 3 years we now experienced a total crash after a finished waypoint flight back to the starting point in waypoint/auto mode.
Any help to solve this is welcome!
I have uploaded the bin file here:

The drone flipped to its side and felt to ground with running motors. Frame is broken, 3 rotors and gimbal, the sony camera survived.
I do have the hope that anybody is able to see why this happened.
Auto function just tells us GPS glitch. Battery was still okay.
System was a self made frame with holybro components and DJI1200 pro motor/rotors at 6s Lipo with 12000mAh Gensace
BR
Thorkana

I think you had a mechanical failure of a motor or prop on the right side. Motor 1 or 4. There’s a big jump in vibration but it’s still in the air. I don’t think it’s an ESC or electrical failure because those usually show up a little more clear regarding the motor that failed. This one is a little more messed up.

The tuning of this machine probably wasn’t helping the lead up to this. The performance of the roll control was very poor. 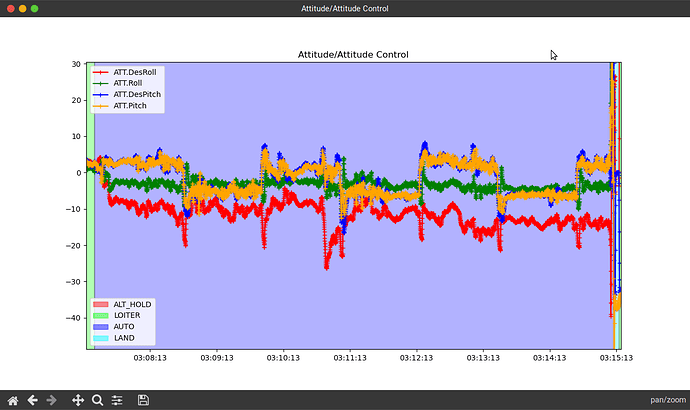 Thank you Allister, I think there was a sound that let me look up coming from the drone, when I was looking at the laptop.
Now the motor and rotor are too much broken as I could find a reason for it, but the mechanic of the motor looks to be okay as I can turn them without noises or resistance. Havent had any crashes in the last years, so I am new to this side of the work in analysis

Haven’t used any plastic props by any chance?

No, the DJI E1200 pro is a set with ESC, Motor and a kind of carbon injection molding props which are nearly stable like pure carbon. I do have several systems based on them and never got problems with the props up to now…but who knows 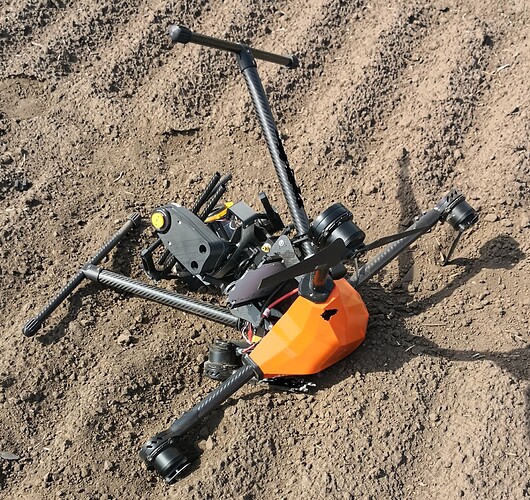 I agree with @Allister and the RCout response is a bit puzzling as he suggests. Typically with thrust loss that output will be driven high and the opposite arm low but that didn’t initially happen here.

Was it yawing as it flipped? I’m thinking there were 2 actions taking place making it confusing to diagnose.

there was a sound that let me look up

That could be something. Hard to say. Did you happen to find all the prop blades in the crash site? Are you missing any? I’ve seen DJI props crack and because of the carbon material they use it’s very hard to see or find the crack. Luckily I’ve never had one fail in flight but I know one must have been close.

@Thorkana
Just checking,…cause I had one crash and a fly-away due to doggy propellers which obviously weren’t UV stabilised and so eventually became brittle.
Exactly like you’ve mentioned: A sudden cracking sound prior to crash.
Needless to say after a crash you wouldn’t know if the propeller cracked / snapped mid air or on impact.

Thanks for your thoughts.
I cant tell you if there was a yaw movement…it was turning around in all directions when falling in that few sconds that just a video could solve that…unfortunaely I stopped doing videos of the flights as the system did work til 2017 without any problems.

The most usual cause of a multicopter crash is ESC, Motor or Prop failure.
And every one experiencing it complains “it flew fine for the past years”

Moral of the story:

Thanks amilcarlucas,
thank you. I did not complain about anything, specially not about the software. I opened this thread to exchange thoughts about the reason of the crash.
As said, worked fine for years without changes. so software was not my concern.
Some are using ardupilot for their hobby, some are trying to earn the money for their families. I belong to the second one, so I am always interested to find reasons for things that did not work as expected

Experience out of this event:

So for me I think with all of your help we can assume it was a prop that was broken in flight. Thanks a lot for all of your time and efforts! We did not collect the prop parts, perhaps I will be able next week for a further proof.

Picture of better days;-)…rest in peaces! 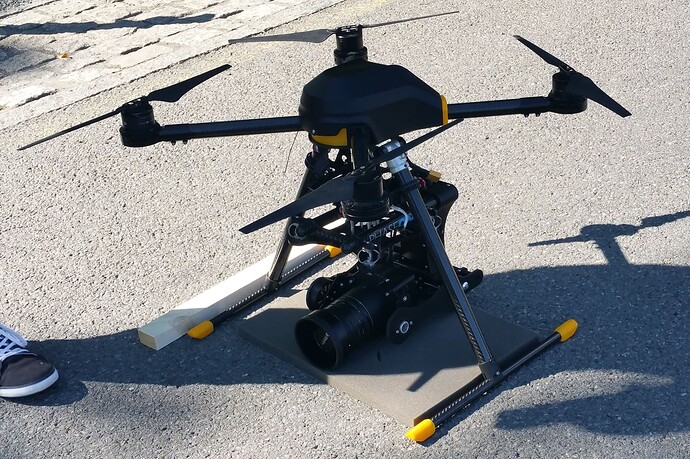 @Thorkana sorry if it came across like I was complaining about you. I was not.

I was complaining about to the many users that jump into the conclusion that the hardware is fine, the software is the one to blame .
When in reality, most times, is the other way around.

Alle fine@ amilcarlucas
Youre all doing an excellent job and have done for so many years. Without this outstanding work we would not have been able to meet here and without I would have worked for the last years in a less exciting job;-)
Best wishes and my thanks to all involved in this development and thos who are using it. Great community!

Allister, I had a chance to make a closer picture of the machine. Look at the screw . This is the right rear motor and you can see the rest of the screw is still in the motor. So it looks like youre absolutely right! Right side motor, one half of prop flying away and thats it!

Thank you for your efforts! 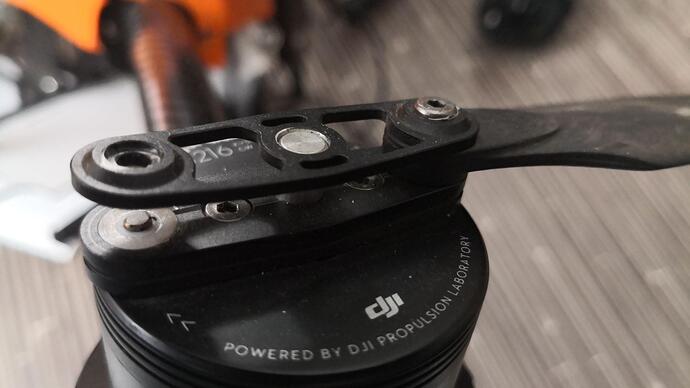 Wow, good find! I wouldn’t have expected the screw to fail like that. Any chance that screw had been over torqued or otherwise damaged somehow?

Its a M3, so 3mm steel…very unusual to see it shearing off that clean?! I havent changed anything in that setup for the last 2,5 years, so I assume a kind of material fatigue. I also cant find any oxidation… strange, isnt it?
The screw was definitely not turned over, you have an easy torque control when moving the blade with the correct resistance.

A hex should be able to handle the loss of function of one arm, but I agree the vibrations would be a concern. Along with the excessive yaw that would come from one motor failure, the vibration from a blade failure may trigger IMU errors that will make it difficult to control.