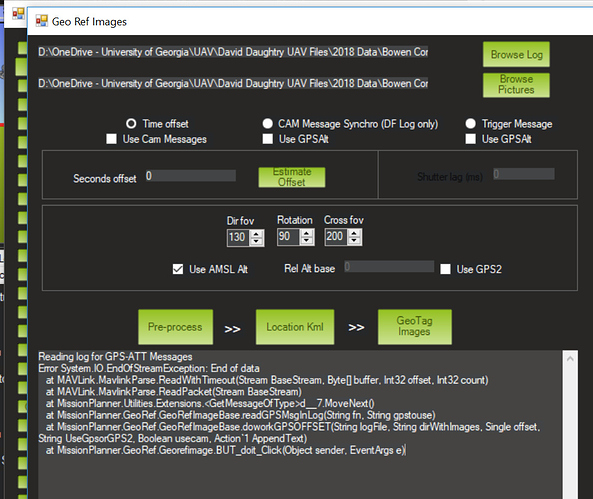 Having issues geotaging images, anyone know how to address these errors?

Images and flight time are the same day and time.

I’ve used this before with a Hero4 and it worked. But it’s been awhile. It looks like it’s having problems coming up with the timestamp data from the log. Did you have your log bitmask set to 655358?

I haven’t adjusted anything with the bitmask log. As far as the time stamp goes, the GoPro was synchronized with our flight software.

Ok, it’s been a couple years since I did this - went to a MAPIR camera with built-in GPS after that.

But from I recall you have to sync the camera’s clock with the GPS time. This can be done with the GoPro app on your tablet. Then in the flight plan for the mission define a camera trigger to go off every so many feet. This will log the GPS timestamp when the camera trigger activates. Set the log bitmask to 655358 so it logs that.

So you use time lapse capture in the GoPro set for say 2 seconds. The camera is normally going to be started before you take off. Unless you start it in in flight with the tablet app (using Wifi). I prefer using the WiFi method to start the camera because eliminates a bunch of extra photos that have to be scrapped.

So my procedure was to take off in Stabilize, switch to Loiter and let the helicopter hover. Start the camera with the tablet. Switch to Auto and let it fly the flight plan. When it gets done with the flight stop the camera in the air with the tablet (it has pretty good range with an airborne camera). Land the aircraft.

Following the procedure for geotagging worked fine for me using that method. It minimized the time offset and minimized photos that are useless and might mess it up.