I have fried three Pixhawk Mini’s and I still have no clue why.

I am using the autopilot on a 3D foamy fixed-wing. The wiring setup is like this, except that:

The problem never happens in flight, it is always while the aircraft is on the ground, armed. The first time I encountered a problem, the control surface servos started flicking back and forth and then going full deflection. One of their circuits burned and started smoking. I keep encountering a similar problem: the control surfaces started flicking, I quickly unplug the battery, and then the Pixhawk Mini no longer functions properly. On one of them, I can see that the TI 6C 2115 part (a voltage regulator, I think?) is burnt (see 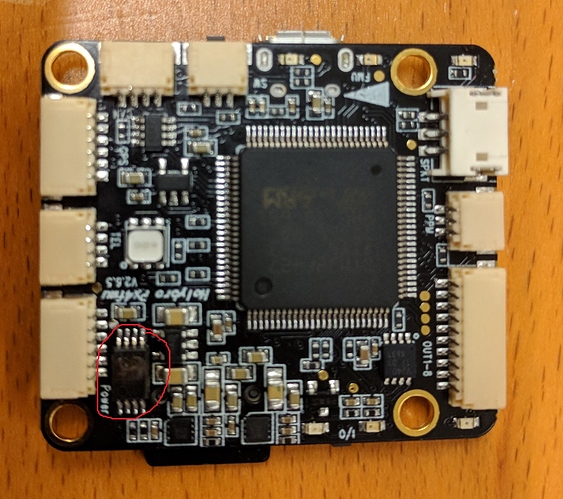 Burned_Pixhawk_Mini.jpg1965×1745 969 KB
where the component is circled in red). The other two Pixhawk Minis are also dysfunctional. I can’t see signs of burning but I smelled it at the time; I quickly unplugged the battery when the control surfaces started going wacky. I have tried replacing the power distribution board, Pixhawk Mini, ESC, and GPS. I have put an oscilloscope to basically every wire going in and out of the Mini and have yet to detect any issues.

Anyone have any idea why this is happening?

I have the same problem as you, in my case I lost my flight controller when I changed the power distributor. The strange thing is that, I made a total of five successful flights and then there was an accident that affected part of the components, so when I connected the power distributor to the Pixhawk mini, there was a slight spark that completely turned off the LEDs, burning my flight controller.

I have consulted other forums and I can not find an answer.

I am using that flight controller for its physical characteristics in terms of the form factor and its small connectors, which makes it ideal for small projects.

Hopefully someone can help us.

I read this:
The Pixhawk Mini output rail (MAIN OUT) cannot power attached devices (and does not need to in the circuit as shown). For vehicles where MAIN OUT is attached to devices that draw power (e.g. a servo used in a plane) then you will need to power the rail using a BEC (battery elimination circuit). The included breakout board allows one channel to provide power on the other outputs. [

You mention the motor BEC , I suggest you try a dedicated UBEC

The MAIN OUT rail is powered by the motor ESC BEC. I could try a UBEC, but:

Is there any schematic of the Pixhawk Mini available ?
The TPS2115 is a power multiplexers that can switch between two power sources = Are you using dual supply ?
Is the 8 channel PWM board is a passive unit ,it is just connecting the gnd-5v-pwm lines together ?

There is only one power source, the one LiPo battery. Otherwise, my wiring setup is as described; I can provide more detail if useful.

Might be a hardware design flaw…but I’ve flown with the Pixhawk Mini for a long time without issue. It was only after I hooked up the ODROID that I started running into this issue. With that said, though, I don’t see how the ODROID could be an issue. It’s drawing power from the LiPo via the power distribution board…and it’s got GND/TX/RX lines going into the Pixhawk, which are communicating fine. There’s no VCC wire going between the two. Otherwise it’s isolated from the Pixhawk.

I could contact 3DR but I’m on a tight schedule; I’m trying to finish up a research project within the next month and a half :s.

I dont see how the FTDI would fry the supply, unless the ground is floating , you can confirm that all the ground are common = Power distribution, Motor UBEC, PWM Board, HK regulator and FTDI

Will do next time I get the chance. Thanks for the suggestion.