I am currently using this item for FrSKy pass through telemetry, but was curious if there was someway to feed back to the autopilot so that the ground control station could get and display the reading?

Not yet, but that request has already been made: https://github.com/ArduPilot/ardupilot/issues/6296

Started working on it last week, will try to get it in a state to create a PR next week sometime - that is just to read the data from the device (started with MLVSS). Looking at the info out there I suspect it will cover the FLVSS too. That will be to just send it out as a telemetry message. I’m thinking I might be able to cobble enough of these sensors together to get something that may work for AP_BattMonitor, we’ll see, that’ll be later on.

This would be incredible to integrate into AP_BattMonitor.

I think it will be doable, with the current sensor and the voltage sensor (or we could use the MLVSS/FLVSS and add the cells to get current voltage). As I said that would be a later on objective, once I’ve got this done I’m back onto the Black Magic Pocket 4K camera, then back onto the better airspeed sensor checking. After that I’d revisit this, so it would be mid year at best (unless someone builds upon the stuff I do before I get back to it).

Wow two of my “wants” I really have been looking forward to an expansion in cameras and the Black Magic is a wonderful start.

I have the MLVSS partly working tonight, still not quite there but close. Good news is that I’m doing it as part of AP_BattMonitor - lost some time working out how to add a new backend to it. I’m hoping I’ll this worked out by the end of the week and then I’ll do a code tidy before creating the PR. I’ll add the current sensor too but will need someone to test that I have the right ID for it. Doesn’t look too hard to add the other sensors like airspeed either, just a matter of getting the right id and going from there.

@spartan27244 Re the BM the biggest issue is getting a Black Magic Pocket 4k in my hands, BM offered a demo camera to me, I stupidly said to BM not to worry on the offer as ‘my’ camera was due to arrive just 2 weeks later. Its now two weeks late. So now I have to go back to BM and hope they have one they can send me for a few weeks. Why did I say no… I figured the hassle of having to get it couriered out and back would not be worth it for two weeks, worst decision ever. So your aware I’ve already integrated in the Black Magic Micro Cinema camera, see https://www.youtube.com/watch?v=cynACV1uUkM which has it working with a Sololink board with OpenSolo and Solex. I haven’t raised a PR with OpenSolo yet, planning on doing so once I get back to it with the pocket 4k. The ardupilot stuff works with any normal TX too (so could be used with a Taranis and a connex for example).

Please keep me in the loop with testing.

I love testing new features! If you shoot me cubeblack binaries to my skype, I’ll test right away. PM’d you for Skype info.

I am curious to see what you can do with the BM Pocket 4k. There website does not list any remote control capabilities except through SDI, unlike the Blackmagic Micro Studio Camera 4K which has an SBUS input.

That is kind of correct regarding the Pocket 4k, it has the remote control SDI interface over bluetooth, so full camera control is possible. I just cant understand how Camera manufacturers have such supply problems, its now 5 months since the launch and they still dont have a steady supply. Best estimate I’ve been given is late March at best, thats if I’m lucky and only because I paid a deposit 5 months ago…

So frustrating… Having said that I’ve not had any time recently to really play with it the last 2 weeks but in the next few weeks I would have.

I didn’t even think about it, but then I decided to see what the instructions show to do, and they appear to be showing the opposite. Is that right? I should connect the signal pin on the sensor to the - pin on the receiver and vice versa? In other words, reverse the cable end?

See photo of how I thought to hook it up vs. instructions wiring colors: 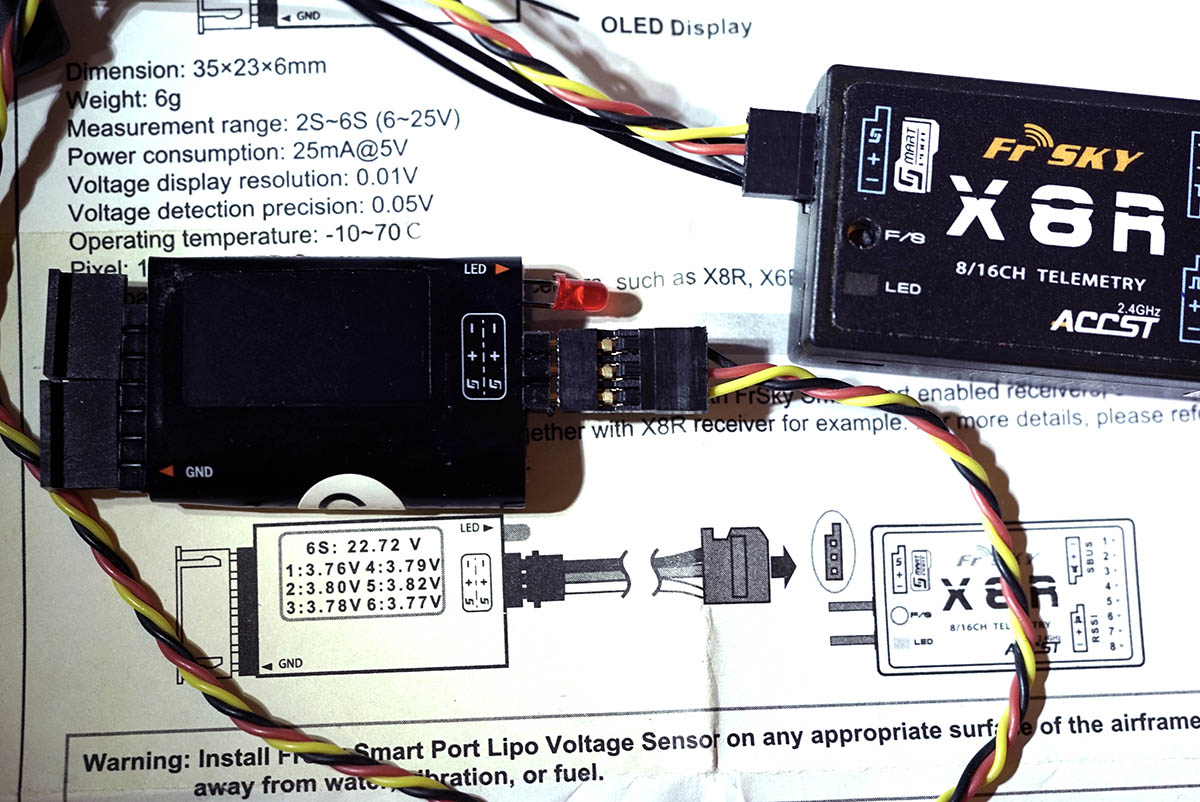 The flvss connects to the x8r Smartport using a regular servo cable. Signal to signal, etc.
The flvss is also connected to the pixhawk (e.g. Telem 1) via an adapter cable e.g. C&T.

Thanks. Yep, works as I have it pictured. Don’t know why the diagram shows it backwards.