Before I start here are my specs

Average hover time in ALTHOLD mode = Less than 3 minutes at 47% throttle, 80 percent rule.This is the same with 10x4.5 as well as 12x4.5 APC props as recommended by the manufacturer website. Obviously the throttle settings for the props varies but the flight time and AMP draw varies by about 5 amps

When you charge your battery, how many mAh do you put back into it?

I charge it at 5 amps if that is what you mean?

I have a supermate dc6 charger. Where do you check that though

Don’t know the charger type, but does it have a display on it ?

The reason I ask about battery is that it can cause this effect without being discharged.
If the battery voltage drops far enough under load it can cause a failsafe trigger but not be flat.
The definitive measure of how much you have used from your battery is how much you need to put back into it.

So unless you know that, you don’t really know how much you have used.

If you don’t have a charger that displays info, how long do you charge it at 5A before it is full?
That will give you a rough indication.
And is it really charging at 5A?

Yes it does have a display.

I usually balance charge it at 5 amp and leave it till its done. It takes around 1 and a half hours

Then on the display it will indicate how many mAh it has fed back into the battery.

Balanced charged the battery last night and got 2091 mah

How do you terminate your flights?
Do you have the battery failsafe set?
How?
What parameters?
Have you calibrated the battery monitor?

Battery failsafe set at 15v via Mission planner and as a backup voltage alarm on bat set at 3.8v

Not sure what you mean by “just hovering”?
When do you decide to land?

3.8v is quite high.
I generally set them at 3.4v which leaves me with roughly a 10% reserve depending on the battery type and it’s voltage drop under load.
Remember that cheaper batteries will drop to a lower voltage under load.

Have a look at the logs to see what the FC is measuring from the battery sensor.

Sorry read your first line wrong. I land when failsafe kicks in and lands by itself. Use the External beeper to let me know to get the drone back.

The only thing you need to avoid with LiPos is under voltage. So 3.5/4v is the norm for failsafe. You want to avoid under 3.0v as an absolute minimum when under load.

Without logs we can’t really help, but I’d guess it’s triggering failsafe too soon. The issue is that the curve from the lipos is non-linear. ie. starts a 4.2, but drops rapidly to a 3.8V range and then has a another increase in voltage drop when running out of steam. you probably find 3.5v (or 3.4v) works better and you get the full use of the energy in your battery. see graph below 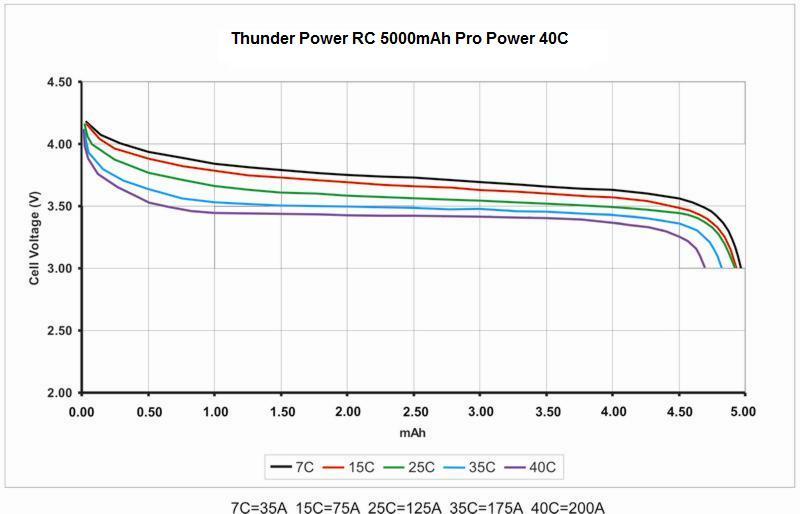 Bill thank you so much that makes sense.

I am going to clear all my logs, do a test flight tonight and then upload it.

Thanks again for your help I really appreciate it

To me it was always quite difficult to understand how long can I fly.

What I ended up doing is modifying MinimOSD to give me an estimation of remaining flight time. Basically I have:

All good more or less. The thing is that the ArduCopter battery estimation look strange to me, the discharge rate is linear as a function of time, I don’t see why is it so, I would expect this depend on e.g. throttle. The second issue is related to this, if I reduce reserve time, then I run into voltage drop which is on the right side of the chart. Basically if I fly up to my remaining flight time and RTL, voltage drops significantly at the descend stage (and I’m typically flying at 200-300m) so throttle shoots up to 100% and even at these rates quad can’t do a controlled descend. I’ve got a crash when it has fallen from about 10 meters because it couldn’t keep itself even at full throttle. So if you think in terms of battery capacity you should also monitor voltage especially if you’re flying high. E.g. the horizontal RTL speed I have is 12m/s while the descend speed is I think 4m/s (I don’t want to increase it because I’ve heard about issues at fast descents).

I don’t think you’re doing the 80% rule correctly, here are the steps:

Voltage is not used in the 80% rule, nor should you use it to calculate how long you can fly. You just need to pay attention not to dip too low. Recent lipo shouldn’t dip in voltage too much, I completely disabled my voltage warning and fail safe. I also found the mah estimate on my power module to be off. I fly with 3000mah lipo, I can safely use 2400mah to get to 80%. But I had to enter in 3350mah as my lipo capacity for the reading to be correct.

And if it really windy the drain will be higher that if it was calm.

Strange that you disabled Voltage Warning. Low voltage take precedence over calculated power drain for the very reason power drain is non-linear and difficult to measure. You even collaborate that is the case since by adding the ‘fudge factor’ to your battery capacity to make it so.

Battery monitoring is an empirical thing. Manufacturers can do it with smart batteries as they have built a profile of a battery they are suing. With the many types of hobby batteries and power consumptions of the craft, its very hard to get an accurate and reflective measure. Except Voltage!

I misspoke, I disabled voltage failsafe, but not the warning. My post was mostly about establishing a estimate on how long to hover, just to get a ball park first. For my applications of AP, I’ve found that the power usage remains mostly the same from 15mph wind to no wind. I’ve landed with less than 80% every time based on time flown. The “fudge factor” as you called it, have been dead accurate compared to mah put back in by the charger. So I watch the mah on the OSD, have timer set to 30 seconds less than 80% to give me margins and listen for the battery %age announcements. I use the voltage before the flight to make sure it’s full, and just make sure it wasn’t some ridiculous number while in flight lie 9v on a 3S. I guess I should put down YMMV for liabilities sake?

According to Overlander’s instructions (I actually read them with my latest battery purchase lol) the 80% is the related to the maximum amp draw. So if you have a 5000mah battery with a 20c rating it can supply 100amps. 80% of that is 80amps so that is your maximum draw. Apart from that it’s as Bill says, it’s more of a voltage limit than ma limit…

I will fly my 5000mah 4s batteries until they are hitting 3.3/3.4 under load and quite often that means putting 5000-5500ma back into them. And after around 50flight’s (on each battery) they are still performing as they did when I first got them.