I’ve built a quadcopter with the pixhawk 2.4.8. I’ve recently replaced ESC’s with higher quality ones, because the previous ESCs were causing throttle issues. After installing the new ones, I made sure to calibrate them first thing, and also recalibrated all the Pixhawk sensors and even the remote.
I’ve double and triple check motor spin direction and prop mounting. It wont lift off because of this strange yaw behavior. I’ve attached the Log file.

Here’s a list of some of the strange tendencies:

When I arm the quad and begin to throttle up, it spins clockwise (right yaw.) but does not lift off the ground.

after about %50 throttle, adding more throttle does not increase the rpm of the motors.

Giving right yaw makes the whole quad jump into the air, giving left yaw doesn’t seem to have any effect.

Like I said, I’ve double and triple checked motor direction and prop mounting, and I’m positive they are correct.

Any help would be appreciated. I’ve searched for similar issues on the forum and can’t seem to find a solution to this. This is one of my first builds and my first post… so I apologize if it not the correct format or if it is a duplicate thread, I am a bit new to this.

Like I said, I’ve double and triple checked motor direction and prop mounting, and I’m positive they are correct.

Did you check this with Mission Planners Motor Test function? When you press the A-D buttons these motors turn and in the indicated direction? 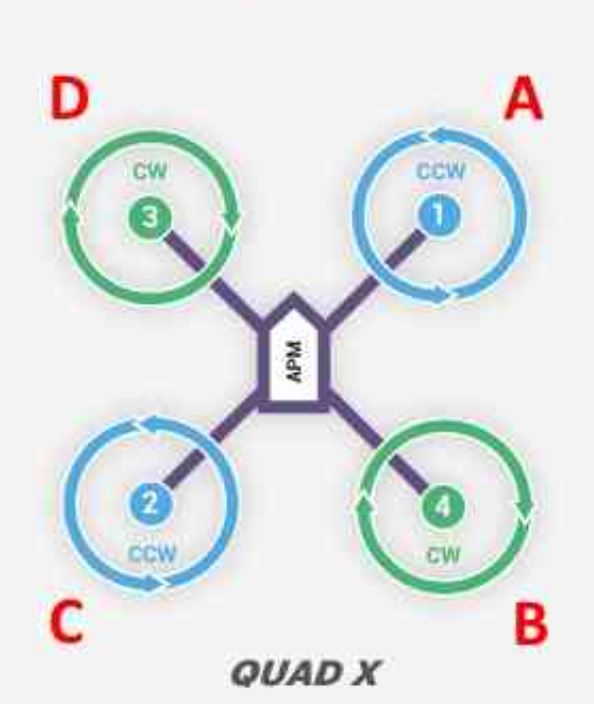 There have been countless posts claiming “Triple Checked the Motor order and direction” and still got it wrong. Not saying that’s you in this case but the odds are based on what you are reporting.

after about %50 throttle, adding more throttle does not increase the rpm of the motors.

What ESC’s do you have and what’s the Motor kV?

Thanks for the answer Dave,
I did the tape-test and I can confirm I have the motors spinning in the correct direction.
My ESC’s are Ready-to-Sky, here’s the amazon link:
https://www.amazon.com/gp/product/B07PZTB2MH/ref=ppx_yo_dt_b_asin_title_o00_s00?ie=UTF8&psc=1

I don’t know what that is. Did you perform the Motor Test in Mission Planner?

Those are old tech ESC’s so what I would have suggested doesn’t matter.

Did you calibrate the ESC’s

Post a video that shows what is going on.

Also remove all the trims on your receiver if you have them. It might seem obvious, but still I say it maybe that’s the case

@dkemxr Sorry I should’ve explained. The tape test means you put some kind of masking tape or scotch tape on the motor shafts like a flag, and then throttle up. This way you can tell which way the motors are spinning just by putting your finger in the path of the tape, it was a technique I learned off of a Flite Test video.
And yes, the ESC’s don’t seem to be the problem. After digging through the logs some more, it seems like the pixhawk itself is spitting out “full right yaw” the whole time, while it shows it’s not receiving that from the remote. I’m going to try and re-flash the pixhawk with a firmware update and see if it’s something in the programming.

@Yaros I did calibrate the ESCs, multiple times in fact.

@OldGazer I’m going to try re-flashing the pixhawk, and then I will attempt another flight. I will take a video this time in case it behaves the same way. Good idea.

Good news! I think I’ve solved it.
My mistake was buying these motors:

I noticed today that these motors allow the props to slip on the shaft. One motor in particular (#4) slips really easy. This results in the quad not lifting off, and the whole thing yawing to the right because only 3 of the props are spinning correctly.
The Pixhawk then gives a full left yaw output to try and correct for this. This output only spins the slipping motor faster, and worsens the issue. This would explain not only to the yaw behavior, but also the strange outputs that seem to jump around from the LOG file. 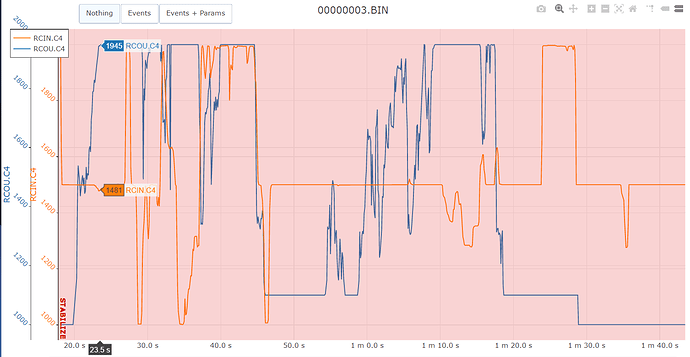 I’ve purchased new motors with a different prop mounting method, hopefully that will fix the issue. I will come back to update this thread with the results.

My mistake was buying these motors

Indeed it was. Collet prop adapters are not suited to multirotors.

Yea, as a beginner, you just don’t know things like that.
It makes sense now, but when you’re buying motors for the first time, it’s hard to know whats what. The title of the listing has “multicopter” and “quadcopter” in the name. They seem to be selling you on the fact that these are in fact made to be used on a drone. I don’t know if that’s false advertising, or just par for the “chinese product” course. Either way it’s frustrating.
I’ll be staying away from these motors from now on, and I will be suggesting other options to other DIY pilots I encounter in the future too.

“multicopter” and “quadcopter” in the name.

They are Outrunner’s (outer bell spins) which standard multirotor motors are. Collet adapters are most often seen on Planes where they are perfectly acceptable. They are cheap to produce which is why you often see them bundled with other cheap stuff (Frames, ESC’s) at bargain basement prices. It lures in the novice wanting to get into the hobby at low cost. I get that but if you are replacing parts soon that’s not really low cost.

I want to say that I have these motors, and they work fine!
I needed to make my own locking mechanism that holds the props tightly and doesn’t slip, I was facing a similar problem when I first built my quad and used the standard adapters and two props would slip and my copter would flip on takeoff, but I wouldn’t recommend using these motors from my personal experience, one of them just broke in half when I was learning how to fly. Yeah, the metal that holds the prop just split in half on a crash instead of the prop breaking, it’s just dumb…

I want to say that I have these motors, and they work fine!

They are junk and not suited for multirotor use.