Would it be possible to make ALL CH5-14 Aux channels editable form a screen all together? I know I can find them in standard params using the “Find” button, but this is very time consuming for me. infact, I have to constantly flip back and forth between the Radio Calibration Screen and the standard params (and search again…) because I cant be bothered to memorize which switches on my radio are mapped to which channel.

…Maybe we could add a “Aux Channels Setup” page to the Config/tuning tab? Like this? 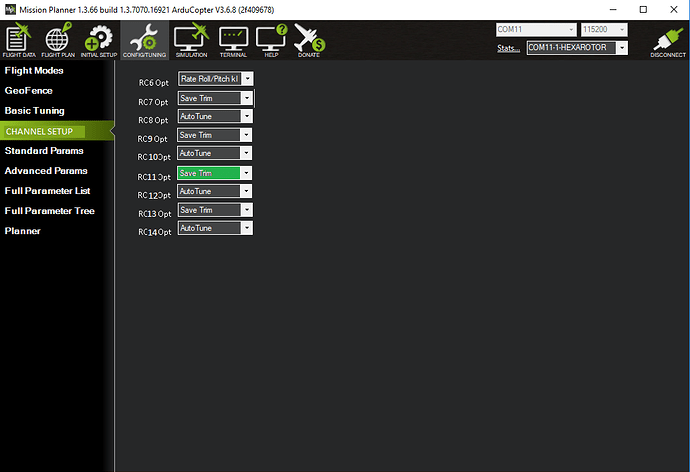 Itd be even sweeter if the associated Channel could be highlighted when flipped HIGH like shown above on CH11? This would allow the user to quickly setup all aux channels at once and also be able to decipher which switched are mapped to which channel by flipping it on/off with the visual feedback of that channel highlighting on/off. If green represents which params have been changed like the full param list, then maybe there could be a CH status column with a different visual cue? maybe a different color? maybe a little radio light to the right that turns red when high?

Is there a better channel for Mission Planner feature requests?

I made a feature request over at the MP git:

Issue: Request: Editing all CHx_OPT in a compact drop down list

please comment if you think this would be useful for you!

Bump cause this would be helpful and ‘Hello World’ is the upper limit of my coding knowledge.

Is there a better channel for feature requests other than here and/or Git?

ive templated this change. just testing how good it works

Thank you! It looks like you’ve been busy in the mission planner section lately!

Let me know if I can help you test it.

Did this ever make it into a functional release?

The template is there. User Params under the Config/Tuning Tab.

Yes, I see it now. I forget to check beta from time to time. Now I just need to figure out how it works.

Doesnt seem to be functional when connected to my plane…The drop down menus appear to be grayed out and are non-functional. Mine shows both “CHx OPT” and “RCx OPT” (both show 6-14 ie - CH6 OPT and RC6 OPT are both shown)

Is the ‘Modify’ button and resulting Pop up letting me rename the parameters?