Hi,
I am facing a weird problem in FBWA mode for my vtol Maiden flight test.
The Quad modes were working good. I know they require some more tuning but the initial response is good. (in Q_sstabilize, Q_hover,Q_loiter)
The problem occurs during the transition when I switched from Qhover to FBWA mode the vtol starts to gain speed and climb but aileron controls were not responding and I believe even elevators were also not responding. Though on the ground I checked FBWA and Manual mode both were deflecting control surfaces.

I have attached the .bin logs as well as the parameter file. Pls, help me in identifying the culprit so I can proceed with the next flights.

Also, the MTOW is 20kg , wingspan 2.6m, Hobbywing x6 for quad and ICE engine for fixed-wing in puller configuration. Cube orange on Cube kore for PDB

Do you have a video of what happened? Were you able to get the plane down?

When you put it in FBWA mode on the ground, you moved the sticks on your TX, but did you move the plane around and ensure that the control surfaces were moving the correct direction based on the movement?

How long is your transition from Q to plane set for? During this period you will have no control.

I don’t have transition video as it was far away and difficult to record but yes, we have checked the control surface movement both from rc stick and moving plane around to check response both of them were correct.
If you are looking for this parameter it is set to 0 and if you are talking about any parameter pls let me know.
Q_TRANS_FAIL,0
In earlier quad planes transition used to happen within 5-7 seconds but for this I believe the ICE engine was not able to supply enough power which delayed the transition and approx. the transition duration lasted for 10 seconds.
Yes we landed the plane safely.
Also are you sure that during transition we don’t have control because, I don’t remember in other VTOL it takes half of transition time which this plane took. So we never tried to control it during transition but in this case it went far away so we gave aileron movement and then only we recognized that it is not taking control from RC so we aborted the transition.

Ooo glad you were able to save the plane.

I’m not 100% sure on this, but I don’t think you get any control until it actually switches into FBWA. So you will have no stick input while it is getting up to speed and then through the Q_Transistion. Maybe it isn’t getting up to the speed you have set in the transition?

I’ll try and look at your logs to see if it ever made it into FBWA.

You do transition to FBWA which looks fairly smooth. Then you change to manual, lose control, and switch to QHOVER.

Have you ever flown the plane in manual before? I wonder if your balance was messed up, giving fbwa limited control because it was using elevators or ailerons to keep it straight.

I’m still learning how to interpret logs, so someone with more experience should look. 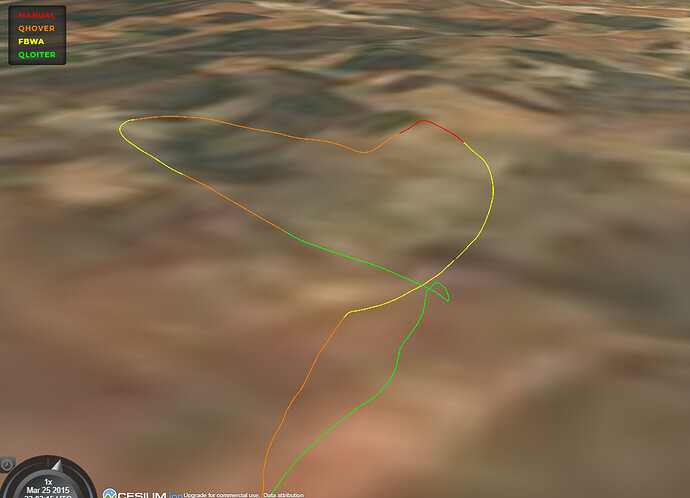 Thanks, @Jeff-openSAR.net for your time.
Yes, we have flown in manual before. I believe this is due to CG issues and high gusts. Will try it again and will see how it goes. Q_ransition_ms= 5sec but the point is it never achieved the ARSPD_FBW_MIN,17 that’s why quad motors were on all the time.