The installation (using mission planner) has not been problematic except at the end. When it says “wait for the tune before OK” I’ve waited for around 2 minutes and the buzzer has not made its regular sound. I’ve thought that the buzzer might have sounded earlier without me noticing it so I`ve clicked OK and proceed to reboot the Cube.

So now, when I power the cube (USB or battery) the buzzer does not do the initial sound and in mission planner it says “Check BRD_TYPE: Failed to init CubeBlack - sensor”. BRD_TYPE is se to 3. I have tried to reboot it multiple times, flash older firmwares and nothing. 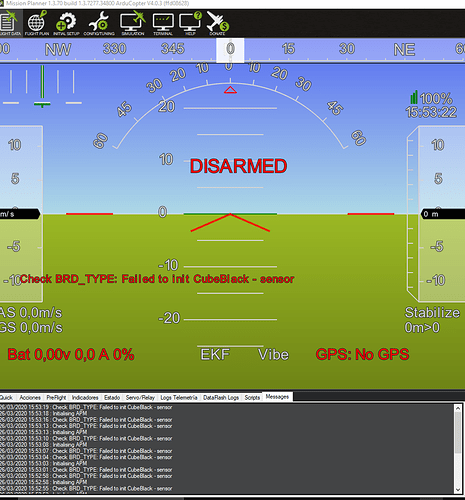 I’ve checked the HW ID page and this is what it shows. Isn`t the barometer missing?

It is a pixhawk Cube Black that I bought nearly a year ago. I have updated the firmware multiple times with the same computer and I have never had a problem. Anyone knows the cause and how can I solve it?

Good day, after you connect it…, before the firmware update did you accept the request about the board black cube?

Yes, the first time I updated the firmware I had to confirm that my board is a cube black, and then disconect the board, press ok and reconect the board.

Did you check also flash a custom firmware file?

No, I have not. I have nevered flashed a custom firmware file so i dont know much about them. Which should I try?

I’ve checked the HW ID page from a similar drone and the only line that I am missing is:
MOT_BAT_IDX devid 0 bus type BUS_TYEUNKNOWN bus 0 adress 0 compass 0 or devtypeimu 0

Just download the .apj, install it with MP using the option custom firmware

Same problem as before.

Update:
So i iunplugged my gps, my telemetry and instead of my buzzer + USB I installed a simple buzzer and connected directly into the cube. After two or three firmware updates with the same result, I have finally managed to get a succesful firmware update. Now I have a working cube but with 3.11 firmware. I am not sure if I want to try to update to the latest firmware, I dont undestand what happens with my cube.

Do you have the last MP and drivers? can you send me pls a pic of your cube?
Did you try also QCS?

Yes, I’ve the latest MP and drivers. In fact, I’ve tried with multiple computers. And yes, I have also tried with QCS.
It is a very narrow chasis, if you tell me which part of the cube you want to see I will try to take a photo.

I have the same issue… Was working and I decided to update.

I notice that If I try to flash the same version again, it says that is already on the board and it boots…

Does anyone knows whats hapening?

When trying to flash the second time I have the message “No need to upload. already on the board.”

I have downgraded the firmware to 3.6, then forced bootloader. It was working, so I updated 4.0.3 again and voila… Now its working kkkkk