I have a F450 frame with a APM2.8 on there. The frame works quite well with the default PID’s, but of course i ran the auto-tune. The problem i have is not specifically related to the PID’s before and after the autotune.
The autotune did change the PID’s.

I’ve recently move the battery from the top mount, to the bottom because i think it’s better mounted there.

I feel that the drone is very unstable when going down. Especially when the battery is nearly flat, it looks like it’s going to fall out of the sky (this actually has happened to me from about 3m high)

My question is - are there specific PID settings that would make the descent more stable? 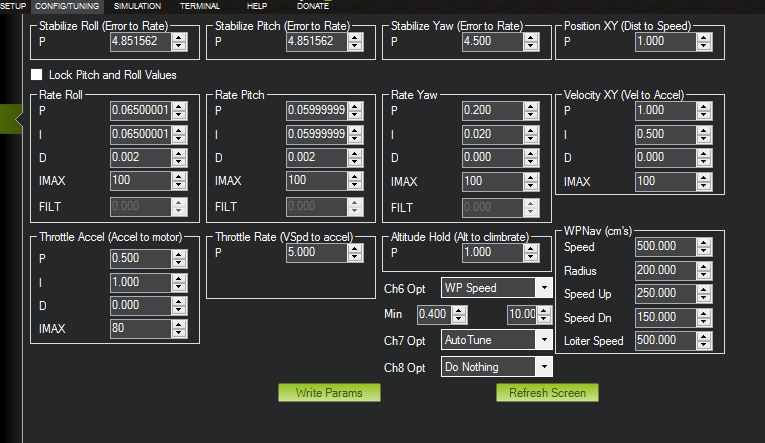 Some help would greatly be appreciated!

A rotorcraft will always be unstable while descending through its own prop/rotorwash.
This is called vortex ring state and has let to helicopter crashes. To avoid this, descend while flying forwards.
Aside from this, the rate PIDs seem to be a little bit low for a 450 size quad.

You can also limit the descent rate to prevent vortex ring state.

Thanks for the responses. I realized the thing is dropping into it’s own “dirty air” (to use a Formula 1 term).

What rate of descent would be ok/normal?

@count74 - what PID’s would you suggest? Higher P values i would think?

After several failed Autotune sessions with various copters and FCs, I always tune manually now. Autotune would sometimes adjust the rate PIDs so low, that the copter was uncontrollable afterwards.

Interesting how mixed the results are on autotune

apart from the ch-6 knob approach, would it be possible to write parameters on the screenshot above while in flight?

Writing anything to the FC, except new waypoints while in flight is not a good idea.
There are many ways to enter bogus values by accident. Point and commas, leading zeros that get lost etc… I always land, enter new values, write and refresh them and take off again. That way I am sure the values arrived at the FC as I intended them to be.

Makes sense. Will do the same!

So - i’ve finally gotten the chance to get to the field and test some things.

Then, i also have another question around loiter mode and tuning that. If i fly in loiter and go forward for around 30 meters, it picks up quite a bit of speed (i have that speed set to 2m/sec). Once i release the stick, it triest to stop (actively banks the other way). This reduces the speed quite a lot, but the copter still drifts quite a bit further. Is there a way to avoid this? Should i raise WPNAV_LOIT_MINA and WPNAV_LOIT_MAXA?