I would like to run Ardupilot on a NOX board which is equipped with an STM32F411C CPU. I wanted to create the hwdef files for it but it seems the STM32F411C is not supported at all.
Adding it by hand is a rather time-consuming affair and I hoped the might be an automated script to convert ST documents to PY code? 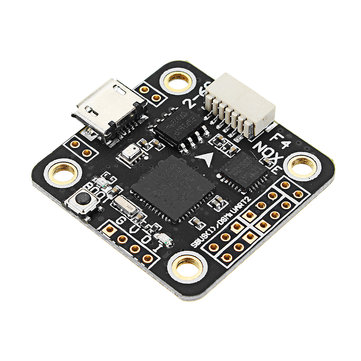 I think there is not enough flash on a F411, you need almost 1M for Ardupilot

Such a small footprint doesn’t need the full featured ardupilot. Basic flight support will do.

Let us know when you have coded a firmware version that will fit. In the mean time the Omni F4 nano V6 works.

If anyone can tell me which steps to take to do the F411c and NOX I will
The F4 pin assignment is quite an extensive list.

if your keen on a small foot print this will run the full code and would be a much easier port, it might even not need a port at all

No barometer though. Maybe en external BMP280 would work on I2C but those boards are nearly the size of these FC’s kind of defeated the purpose.

My drones have nox controllers because I think they are superb.
I have made an INav nox implemention, which is quite easy, but would like VTOL capabilities.
So now I would like to have Ardupilot on my nox to become a VTOL.
I would like to discuss how to do this. I’ve seen the source code containing the pin mapping but they are quite extensive. Is there tooling to create these from st f411c specifications?

I don’t think there is any hope of geting the VTOL code to fit in the flash. Just plane or copter maybe if you remove all the EKF and GPS stuff but at that point you might as well just run INav or betaflight.

I tried a bit but it seems to me that the code isn’t modular enough to make a clean cut of elements I want.

So I ordered an Omnibus nano v6.